Your Guide to This Weekend’s Eat Real Fest 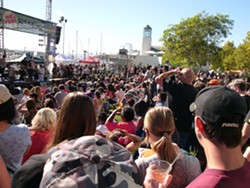 Now heading into its sixth year, Eat Real is already something of an institution — certainly, Jack London Square residents know, by now, to brace themselves for the throng of cars scouring the neighborhood for street parking. That said, the event organizers add a few new wrinkles each year. Here are a few highlights, for those of you who wouldn’t think about attending an event like this without a concrete plan of attack:

It’s possible that you’ve attended Eat Real for years with nary a thought about the festival organizer and nonprofit Food Craft Institute, which offers classes on everything from sauerkraut-making to the business of beer. This year, organizers hope to change that by dividing the actual layout of the festival into outdoor pavilions that correspond to the different subject areas that the institute teaches: meat and butchery, sauces and preserves, confections, grains and milling, fermentation, and farmcraft.

So, for instance, a curry-focused Indian street-food vendor can be found in the sauces pavilion, and kimchi makers (and, say, a food truck whose menu prominently features kimchi) will set up shop in the fermentation section. Meanwhile, the large indoor space that used to house purveyors of “craft foods” (e.g., pickles and dried pastas) has been dubbed The Watering Hole — head there for all your beverage needs. Check out the full event map here.

In perhaps the most controversial change, this year Eat Real organizers have raised the price cap for the street food vendors to $8 an item — up from the $5 limit that had been enforced for the festival’s first five years. According to event manager Ally DeArman, many of the vendors themselves requested the change, citing inflation and rising food costs — especially for meat — that had prevented them from being able to offer their signature dishes at the festival. That said, DeArman stressed that many, many items will still be priced at $5 or less.

Every year, chef demos are scattered throughout the course of the three-day festival. That will still be the case this year, but many of the Oakland chefs will be featured in an opening-night extravaganza on Friday known as “Oakland Chef Night,” wherein such luminaries as Preeti Mistry (Juhu Beach Club), Gloria Dominguez (Tamarindo), and Charlie Parker (Haven), as well as several local bartending superstars, will show off their chosen recipes. For visitors, it’s a good time to come out to “express Oakland pride,” DeArman said.

Meanwhile, this year’s iteration of “Offal Wonderful,” a parallel event centered on celebrating an animal’s often-overlooked “nasty bits,” will focus on blood. On Saturday in particular, visitors will be treated to a deluge of (very loosely) blood-themed tastings and demonstrations: blood sausages, of course, but also Bloody Marys, blood orange compotes, and a “blood-boiling” pepper jam tasting.

5. New Kids on the Block

Each year, Eat Real brings together a mix of tried-and-true favorites and newcomers on the street-food scene. According to DeArman, a whopping 28 out of the 74 total food vendors are brand-new to the festival. Newcomers that DeArman is particularly excited about this year include Suite Foods Waffles (for “really awesome savory stuffed waffles,” DeArman said) and S+M Vegan (an Oakland-based pop-up).

You’ll probably want to browse the complete vendor list before Friday to figure out what your own personal must-eats are.