With its new, untitled visual EP, the band examines longing and nostalgia through stylized music videos and atmospheric sounds. 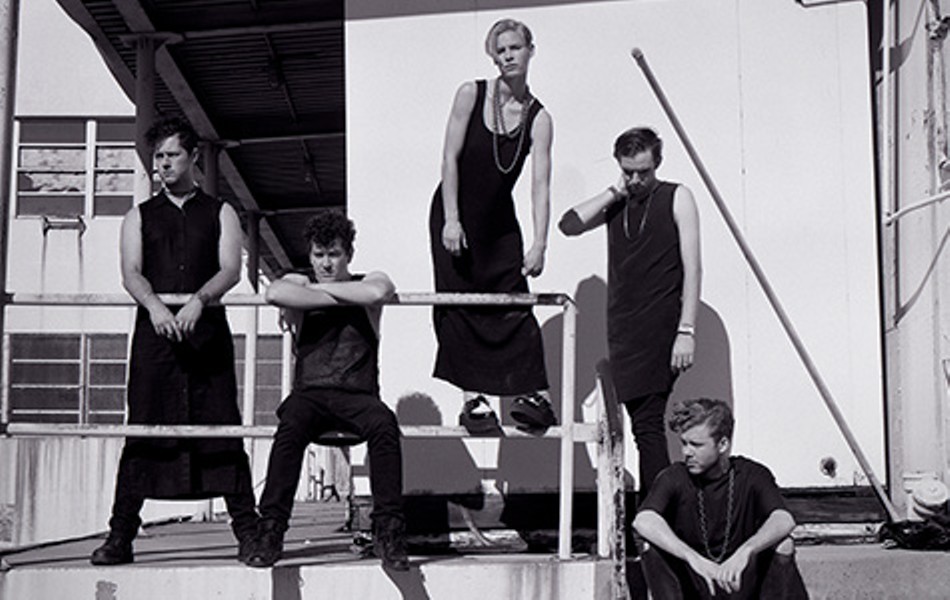 Amy Harrity Instead of releasing a traditional EP, Yassou put out a series of five music videos.

Amy Harrity Instead of releasing a traditional EP, Yassou put out a series of five music videos.

Singer Lilie Bytheway-Hoy and guitarist James Jackson of the North Bay indie pop quintet Yassou have a tendency to spend long periods of time fixated on singular obsessions. Over the past year, the bandmates have been binge-reading Haruki Murakami's novels, which use magical realism to parse through feelings of loss, emptiness, and nostalgia. These emotions permeate Yassou's latest release, an untitled EP the group put out track-by-track during the past several months exclusively in music video format. (In addition to Bytheway-Hoy and Jackson, Yassou includes guitarist A.J. Krumholz, drummer Patrick Aguirre, and synth player Theo Quimby.)

"I love the ideas that [Murakami is] talking about — of wanting to preserve that feeling of love," said Bytheway-Hoy in an interview, referring to one of his bestsellers, Kafka on the Shore. Its protagonist, Kafka Tamura, follows his enigmatic lover into the spirit world even though fate has driven them apart. "When you're in your perfect moment, you can't help but have that twinge of like, 'This is going to end in 24 hours; this is going to end in a year; this is going to end in two minutes.' And you hold on to that so you can't experience the full joy of it."

Yassou's new EP speaks to the feeling of longing for something that never was, and the human tendency to romanticize the past. I dreamed a dream/I had a daughter/Fell asleep again/Just to hold her, Bytheway-Hoy sings on "To Sink." It's an airy, melancholic track with a wistful keyboard melody that drifts over a pitter-pattering drumbeat. Throughout its lyrics, she grasps at passing moments but ultimately accepts their impermanence: These will be my final hours/Do what you want with me.

Like "To Sink," the project's other four songs have a doleful, contemplative sonic palette. Sparse keys and atmospheric synth riffs add bursts of color to the prominent drum beats underscoring Bytheway-Hoy and Jackson's vocals.

While Jackson's nasal pitch is idiosyncratic, Bytheway-Hoy's singing has a refined quality that betrays her choir background. Her style, however, is unostentatious and she adds flourishes sparingly. For instance, on the project's first track — or chapter, as the band refers to each video on the EP's animated interface on YassouBand.com — she accents each "I" and "Ah" by unexpectedly leaping into a high note and dropping back down to her husky timbre. On "The Woods," her wispy chorus turns into a spider web of delicate harmonies.

Yassou's EP makes for good driving music: a soundtrack for clearing one's head over long stretches of highway. Its music videos cultivate a similar quality of self-reflective solitude. Bytheway-Hoy stars in the videos and is often pictured alone. We see her running down a dark, wooded road; standing before a precipice, her clothes billowing in the wind; or sinking deep into the ocean. The other characters that appear — such as the synchronized swimmers in "To Win/Young Blood" or the dancers in "To Sink" — seem more like personifications of her emotional states than characters in their own right.

Bytheway-Hoy co-directed the videos with several Bay Area filmmakers: George Daly, Peter McCollough, Amy Harrity, and Gary Yost. Originally, the project was going to be a full-length album with ten videos that formed a continuous plot, but the undertaking proved to be too ambitious given the musicians' limited resources.

"I spent a lot of time thinking about the stories and how they would be connected, and the symbolism and all of that," said Bytheway-Hoy. "And after a certain point, I just had to let go of my ideas and let it be what it was going to be. ... I often have impossible ideas, but we always try for them, and what we end up getting is pretty amazing, even if it's not the impossible thing." Still, the final product proved to have a cohesive vision, and the different directors' aesthetics flow seamlessly together.

Long drives defined the members of Yassou's teenage years in Hudson, the small town in upstate New York where they lived before coming to the Bay Area in 2011. According to Bytheway-Hoy and Jackson, Hudson is the type of place where getting your driver's license at age sixteen means freedom. In high school, the bandmates spent late nights driving around on desolate back roads, partying in people's cars while their parents were sleeping. The EP, they explained, is rife with nostalgia for their carefree, reckless adolescence.

"It was freedom from responsibility and freedom from paranoia," said Jackson. "You did whatever you wanted to do without thinking about the consequences. And now, looking back on that, it's kind of nice and nostalgic — and in a way, you see how destructive it was."

In the video for "The Woods," which Harrity directed, the band reimagines one such late-night drive. In it, Bytheway-Hoy's character drives a vintage Oldsmobile down a winding road. As she peers into her rearview mirror, visibly on-edge, the scene shifts between different visions. First, her friends are in the car, apparently on a joyride. Suddenly, she's alone. Then, she's watching herself kiss a man, whom Jackson plays, in the backseat. Eventually, she parks and opens her trunk to reveal the man's corpse. Headlights, mournful/Highways, unknown/I've seen your faults/I'll wait until I know, she sings as she dives off the overpass.

"The idea, ultimately, is about how when you have really close and intense relationships with people, it can be helpful and creative for both people," said Bytheway-Hoy, "but it can also be destructive at the same time because it becomes more important than anything else."

Like Yassou's other work, the video examines the ways in which seemingly contradictory emotions can bleed into one another within a single experience. With its deft juxtapositions of music and visuals, the band's EP immerses the listener in its romantically melancholic world — a place where darkness always looms, even in the beautiful moments.