Will Oakland Lose Its Artistic Soul?

Members of The Town's vibrant arts community say they're at risk of displacement because of skyrocketing rents, and that Oakland isn't moving fast enough to protect its cultural identity. 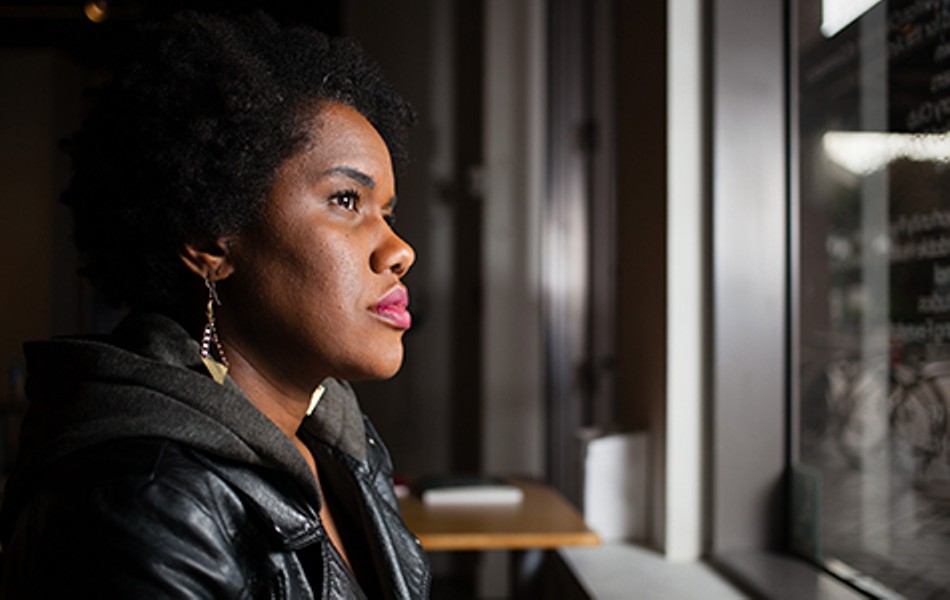 Bert Johnson Anyka Barber, founder and director of Betti Ono Gallery, is worried that the gallery might have to close because of a steep rent increase.

On the first Friday of February, during Oakland's monthly street fair, patrons packed into Betti Ono Gallery in the heart of downtown. The gallery's walls featured photos by Brittani Sensabaugh, depicting Black, disenfranchised communities across the country — including the deep East Oakland one where the artist grew up. With her mother by her side, Sensabaugh spoke about what she aims to achieve through her work: uplifting struggling communities by representing them authentically, rather than relying on harmful stereotypes. Afterward, a patron asked a question that seemed to have been on the minds of many: "What are your thoughts on gentrification?"

"I've got a lot of thoughts about that, but let me just keep it to a bare minimum," Sensabaugh responded. "It's not even the fact that they are coming in, it's the fact that the people coming into the neighborhoods are not embracing the culture that is already there."

At Betti Ono, conversations about art and politics are always entangled. Physically, the gallery itself offers a metaphor for that deliberate intersection. Tucked into the Broadway-facing edge of Frank Ogawa Plaza, the space occupies the same plot as City Hall, with its door mere yards from the city council chambers. There, it's uniquely poised to bring the concerns of artists and culture makers to a place where they can't be ignored by those in power — to amplify unheard voices on a stage at the center of the city.

But Betti Ono's own voice is in danger of being silenced. Recently, the gallery's founder and director, Anyka Barber, received notice from her landlord — the City of Oakland — that her rent was going up by 60 percent. That works out to $22,000 more a year, and the gallery can't afford it. According to Barber, when she moved into the space five years ago, representatives from the city's real estate department told her she would eventually be able to secure a long-term lease, and that the city would provide support for improvements on the space to accommodate her programming. But instead, the city has hiked the gallery's rent every year.

Although Barber has been requesting a long-term lease from the start, the city has only offered her one-year leases, she said. And since the gallery's last lease ended in December, she has been operating on a month-to-month basis — a situation that has greatly inhibited her ability to plan for future programming and apply for outside funding or loans, she said. The space is currently in limbo, she added, because representatives of the city's real estate department have asked her to hang on until they decide whether they can offer her a lower rate. Meanwhile, she's had to turn down artists and cultural organizations interested in collaborating. Soon, she'll be launching an online fundraising campaign in hopes of keeping the gallery open.

"We don't have a lease, which means we don't have a home," Barber said in a recent interview. "That's a really, really hard thing to say about a space that has been intentional about creating space for people of color in Oakland, especially Black people, to feel like they belong and that they have just as much access to downtown and can celebrate themselves in public and be seen and be accepted and be protected just like any other group in the city should be able to do."

The challenges facing Betti Ono Gallery are not unique. Although Oakland's art and culture scene has blossomed during the past decade and gained widespread recognition for its vibrancy, a growing number of arts and cultural spaces are currently at risk of displacement. In fact, many have already shuttered, and artists and gallery owners are increasingly worried that Oakland may eventually lose its artistic soul.

For the past eight months, Barber has been working to stem the tide of displacement of Oakland's artists and cultural spaces as one of the core leaders of Oakland Creative Neighborhoods Coalition (OCNC). Barber co-founded the group in June with Katherin Canton, a network coordinator with Emerging Arts Professionals San Francisco Bay Area, in hopes of organizing around rising concerns over Oakland's arts community being priced out of the city. (Canton has since stepped away from her leadership role in the coalition due to time restraints, but well-known Oakland arts advocate Eric Arnold, a former Express staffer, has taken on a prominent role, among others.)

OCNC, which now has hundreds of members, initially came together in an attempt to draw city officials' attention to the need for Oakland to hire more staffers in its cultural arts department before the 2015-2017 city budget was finalized in June of last year. The city has been without an arts commission since it disbanded in 2011.

The city's cultural affairs department used to be robust: From 2001 until 2003, it had thirteen employees working specifically on arts-related matters. But since then, the department's staffing has gotten consistently smaller. It also took a major cut during the recession. Today, it only has three full-time employees and one part-timer, with only two of those positions dealing directly with art and artists.

Pamela Mays McDonald, an OCNC member and External Affairs chair for Oakland Art Murmur, a nonprofit organization that supports and represents Oakland galleries, addressed the issue in a recent email: "The fact that the Cultural Arts Department has been kneecapped by having no commission of responsible citizens for advocacy and oversight, combined with being grossly underfunded and understaffed, leaves culture workers here defenseless against the onslaught of gentrification," she wrote. "There is no institutional understanding that the arts are an economic engine for the area; they are not just a cynical lure to make a neighborhood pretty to attract outside investors."