Will Oakland Adopt a Mansion Tax?

Councilmember Dan Kalb is developing a tiered property transfer tax that could raise rates on expensive homes and generate millions in new revenue. 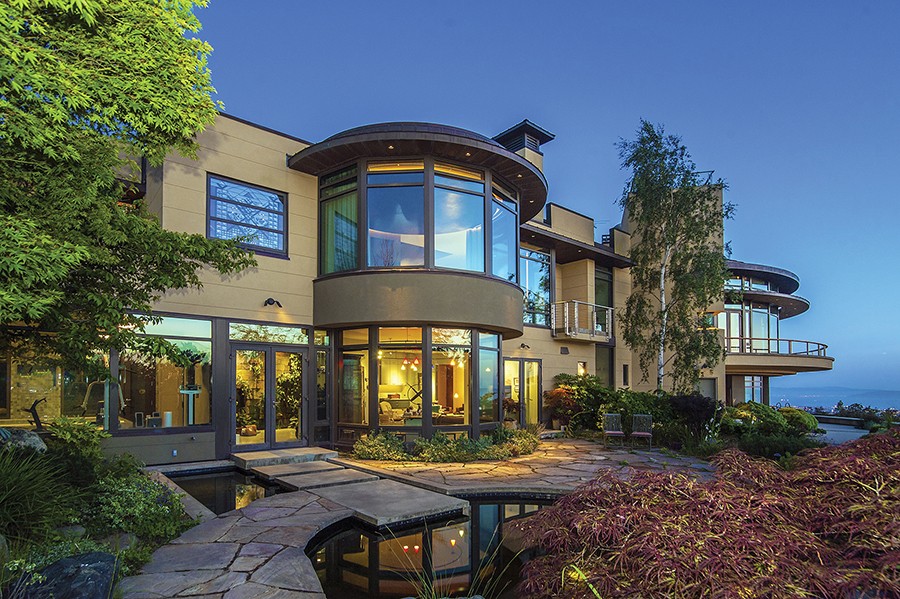 When a single-family home sells in Oakland's flatlands for $400,000, the buyer and seller split the 1.5 percent real estate transfer tax owed the city — about $6,000 in total. And when a mansion sells in the Oakland hills for a lot more, like the $20.5 million trophy home that traded hands in May 2016 — the most expensive Oakland residential deal in recent years — the buyer and seller paid the same 1.5 percent rate, totaling $337,500. The same flat-rate tax system also applies to multimillion-dollar, class-A office towers in downtown and to dilapidated storefronts and garages in the flatlands. Everybody pays the same rate.

The solution, according to Kalb, is to structure Oakland's real estate transfer tax like San Francisco's: progressively increase rates on properties that sell for higher prices. Keep rates low for less expensive properties — mostly homes and condos bought and sold by working- and middle-class residents. Kalb's plan would resemble the progressive-income tax system used by the state and the Internal Revenue Service.

Although Kalb hasn't proposed a specific plan yet, he had city staffers crunch some numbers earlier this year during budget deliberations. They looked at a hypothetical real estate transfer tax with five graduated brackets, starting with properties that sell for $250,000 and under. Buyers and sellers of these cheaper properties would actually see a tax cut, from 1.5 down to 1 percent. Homes and other buildings selling anywhere from $250,000 to $2 million — the majority of homes sold in the city — would keep the existing 1.5 percent rate. Anything with a price tag above $2 million would incur higher rates, from 1.75 percent all the way up to 2.5 percent.

City staffers found that if Oakland had used this tiered rate structure during the past six and a half years, the city would have netted an extra $42 million in revenue. "I think we need to do this because it can bring in millions in revenue to fund the improved services that we need, whether it's affordable housing, homelessness, or public safety," said Kalb, in a recent interview. "And we need to make sure any additional taxation doesn't fall on the lower income or middle-class residents."

Kalb is currently working on a detailed proposal and said he hopes the council will place it on the November 2018 ballot. But he said he's going to work with stakeholders, including property owners and real estate industry groups, to hear their concerns and make sure it's a fine-tuned plan.

San Francisco is the only city in California that currently has a progressive real estate transfer tax, which was first passed in 1994. Over the years, San Franciscans have adjusted the top rates several times, most recently by approving Proposition W, authored by Supervisor Jane Kim. In conjunction with Prop W, San Franciscans also passed a measure to guarantee that attendance at its city college is free for all residents, a service paid for, indirectly, with the tax.

Former San Francisco Supervisor John Avalos, who authored Proposition N, a 2010 ballot measure that significantly increased rates on San Francisco's top two real estate transfer tax brackets, raising millions more per year in revenue, said progressively tiered property transfer taxes are one of the most equitable ways of funding local government. He credits Prop N with saving many services that would otherwise have been drastically cut during the Great Recession.

"People are starting to build like crazy in Oakland, and they're going to build things that will earn big money over time," Avalos said in an interview. "Global capital is going to find its way to Oakland. Gentrification is happening. But if Oakland is strong, they can determine how the wealth gets shared."

But some East Bay real estate industry representatives have voiced fears that a tiered transfer tax could negatively impact middle-class homeowners. Kiran Shenoy, government affairs director of the Oakland-Berkeley Association of Realtors, said his group hasn't taken a position yet because there isn't an actual proposal yet to review. But he added that if the plan starts the "graduated transfer at around $1 million, it'll get unreasonable for a lot of moderate-to-low-income folks who are trying to sell their homes. They've got equity in it, but now all of a sudden, they've got to shoulder the burden of city government. That's not equitable."


"People are starting to build like crazy in Oakland, and they're going to build things that will earn big money over time," Avalos said in an interview. "Global capital is going to find its way to Oakland. Gentrification is happening. But if Oakland is strong, they can determine how the wealth gets shared." tweet this

Shenoy added that if the council ends up considering something that's similar to what Kalb has mentioned in newsletters and during the budget process earlier this year, his group would likely oppose it. He also pointed out that Oakland's existing flat transfer tax is currently the highest in the state.

Others, however, say Oakland could structure the tax so that the vast majority of homeowners don't get hit with any increase. "I don't think it will impact poor and working-class homeowners," said Alex Tom, executive director of the Chinese Progressive Association, which was involved in campaigns to raise San Francisco's transfer tax on high-value properties. "I think this is about corporate power and sharing some of the wealth they're accruing."

Tom said that San Francisco's experience with progressively tiered transfer taxes has shown that it can be a major source of funding to prevent cuts during hard economic times and to expand programs that benefit working families. "We saved so many services through this. It allowed us to fund homeless services, services for immigrant communities, and to prevent basic health cuts."

Other cities have considered the idea before, but it has yet to spread beyond San Francisco. Los Angeles officials considered a tiered tax in 2012 and even hired an economics consulting firm to model potential impacts. The consultant found that a four-tiered tax starting at 0.2 percent for homes priced under $255,000 and rising to 0.9 percent for homes $585,000 and above would have raised as much as $82.4 million more a year while reducing the number of property sales by 1 percent. LA city staffers recommended moving ahead with a ballot measure, but the idea fizzled.

In Santa Monica, voters rejected a ballot measure in 2014 that would have created a two-bracket system, with buyers of properties valued at more than $1 million paying a 0.9 percent tax, and less expensive properties getting taxed at the existing 0.3 percent.

Tom said it was difficult to establish a progressive tax in San Francisco, and it'll be difficult elsewhere, but he expects more communities will move in this direction.

Kalb said he thinks it's an idea whose time has come in Oakland, especially as the city searches for more robust sources of funding for affordable housing and homeless services.

But because it's a general tax that deposits revenue straight into the general fund, it's unclear if the money can be legally dedicated to any specific programs.

"I've asked the city attorney to see if we can earmark a portion of it," Kalb said. "I'd like to earmark 25 percent of the additional amount we get to the affordable housing trust fund. If it's allowed, we'd do it."

Avalos said it wasn't allowed in San Francisco, and so it has been important to make sure the money pays for priorities held by voters, like the free city college program. "You can create this progressive tax, but you have to have a program to move that into the neighborhoods and communities that aren't doing well, that need the extra support."