Will Berkeley Cut A Deal With Airbnb Or Vote To Regulate Short-Term Rentals? 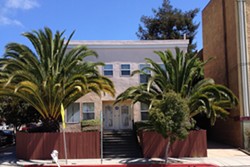 A shake-up at last night’s Berkeley city council meeting over short-term rentals suggests an imminent East Bay showdown over how to regulate companies like Airbnb.

Berkeley was set to vote on an ordinance that would legalize and regulate short-term rentals, or STRs, on Tuesday. But discussions over next year’s budget ran long, so the Airbnb vote was delayed to a special meeting on July 7 — but not before some hints that Berkeley, once considered robust in its stance to regulate STRs, is buckling under pressure from Airbnb.

The afternoon before Tuesday’s meeting, Berkeley Mayor Tom Bates threw councilmembers for the loop by quietly suggesting that, instead of regulating STRs now, the city should strike a deal with Airbnb.

Bates recommended collecting a transit-occupancy tax, or “hotel tax,” from Airbnb until council could resolve legislative issues related to STRs.

The mayor’s proposal is similar to the current deal Airbnb has with Oakland, where Airbnb collects taxes from hosts and remits them to the city. Oakland officials have not released details about the agreement to the public, however, citing concerns over host privacy.

Berkeley Councilmember Jesse Arreguin called the mayor’s proposed deal “ridiculous” — especially considering that it was Bates who introduced the idea of regulating STRs in the first place.

“Basically what the mayor’s proposing is to allow something illegal to continue happening as long as we get taxes,” Arreguin told the Express. He said this was tantamount to “sanctioning an illegal action.”

Bates’ proposal included a list of stipulations by Airbnb, among them a clause requiring the city’s Department of Finance to waive the right to pursue previously unpaid TOT taxes from Airbnb hosts or the company.

City Council first approved a reading of its STR ordinance with an 8-1 vote at its May 31 meeting. That draft of the ordinance mandated that hosts must live in homes they rent out, and cannot rent homes below market rate. The ordinance also disallowed renting accessory dwelling units, such as backyard cottages.

After last month’s meeting, Airbnb contacted its Berkeley hosts and urged them to lobby city council against the regulations, which they called “confusing and onerous.” Airbnb also provided a form letter touting the economic benefits that it brings to hosts and the local economy. This resulted in hundreds of letters to city councilmembers.

STRs –– defined as stays less than 14 days –– have never been legal in Berkeley, because of laws intended to prevent landlords from dodging rent-control rules that kick in after a tenant stays for 14 days. Nevertheless, there are hundreds of listings advertised in Berkeley alone on sites such as Airbnb, VRBO, Home Away, and others.

Local Airbnb hosts have balked at the idea they register as businesses with the city. Many see the platform as a casual way to rent out extra space in their homes. Others say that the rentals provide a crucial source of income, and that registration and taxes would cut into that revenue.

But advocates of STR regulations say Airbnb users in Berkeley need to register as businesses, just like any other business operated from home. They also say lack of enforcement from the city doesn’t mean users should rely on the practice as a reliable income source.

“Not being aware of the law is not a good excuse,”said Katherine Harr, vice-chairwoman of the Berkeley Rent Stabilization Board and member of the Berkeley Tenants Union.

The version of the Berkeley STR ordinance from last night also was missing a previously included requirement that STR hosts post a business number in with an online ad. Staff did not give councilmembers the option to approve the old ordinance language, which left Arreguin mystified by what he called a “rogue staff.”

“It makes me question whether they really want to enforce this or not,” Arreguin said. “I don't understand why staff throughout this process has tried to water down the enforcement requirements.”

Berkeley has faced criticism for not enforcing existing law for STRs, especially in instances where landlords take entire units off the market in favor of more lucrative short-term renting.

This scuffle over regulating STRs in the East Bay comes on the heels of Airbnb suing the city of San Francisco this past Monday over a law threatening massive fines. San Francisco’s new rules would fine AirBnb $1000 for every unregistered host on its site. That tough regulation is the latest development in the city’s struggle to reign in STRs.