Will 2018 Be the Year of the Landlord in Alameda?

There’s an increasing concern among Alameda tenants that they may lose their fight for rent control and just cause evictions on the Island. 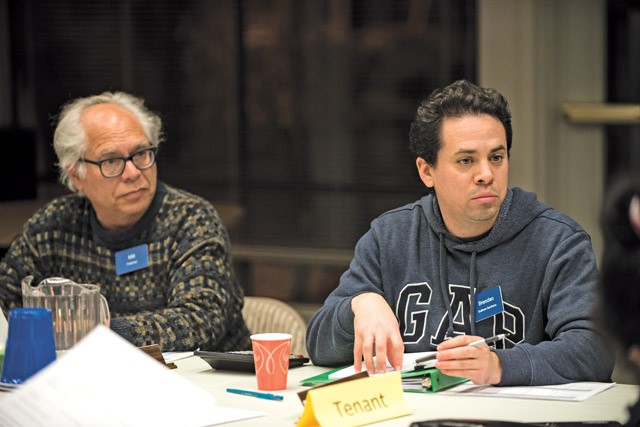 For nearly three years, Alameda’s renters and landlords have faced off in a number of political skirmishes. And each side has notched some key victories. But as the city heads toward a pivotal election this November, there’s a growing concern among renters that landlords have gained the upper hand. A ballot measure that will go before voters this fall would allow landlords to effectively block any chance of rent control or more tenant protections in Alameda for years to come.

What a difference a year makes. In spring 2017, Alameda renters had reason to believe their cause was again gaining momentum. In a move strongly opposed by landlords, the Alameda City Council voted to ban the eviction of tenants for no reason and only allowed evictions for just cause — such as failure to pay rent.

But the tenants’ win didn’t last long. A month later, a group of landlords funded a pair of successful petition drives: One repealed the council’s just cause vote, and the other put a measure on the November 2018 ballot that seeks to lock in place Alameda’s current weak tenant protection law and block just cause or rent control in the future. The cash-strapped Alameda Renters Coalition worried it couldn’t afford a campaign against two ballot measures, so it convinced the council to nullify the just cause ordinance.

Suddenly, landlords were back on top. If voters approve the landlords’ ballot measure this fall, it means that it will take another vote of Alamedans to enact anything more tenant-friendly.

Yet despite the setbacks, renters are not ready to give up and are pointing to the gains they’ve already made. “We’ve changed the conversation,” said Eric Strimling, spokesperson for the Alameda Renters Coalition. He noted that even though the current tenant protection law is not ideal, it’s better than what renters had previously — and was opposed originally by landlords before the council approved it in March 2016. “Now, landlords are saying, ‘Let’s lock in what we’ve got. Let’s dam the stream.’”

Councilmember Malia Vella also argued that Alameda renters’ successes have been significant. “The thing to remember is that, although Alameda is majority tenant, we still trail San Francisco and Oakland in terms of the high ratio of tenants to landlords,” she said.

But Vella also pointed out that in the November 2016 campaign for Measure L1 — the ballot measure backed by landlords to support the city’s weak rent stabilization ordinance — landlords called it “real rent control.”

“Alamedans voted for it in large numbers,” Vella noted. “That tells you things are changing.”

Still, landlords are gearing up for a big fight at the ballot box this November. They’ve made clear that they intend to target Councilmember Marilyn Ezzy Ashcraft, who plans to run for mayor, and Councilmember Jim Oddie, because of their votes in favor of just cause. In a letter obtained by the Express, Don Lindsey, one of Alameda’s most influential landlords and co-founder of the property management firm Gallagher & Lindsey, wrote that landlords are preparing to raise huge amounts of cash for the November 2018 election. “The war that we are fighting seems to be about rent control, but that is only a small part,” Lindsey wrote. “It is the vehicle they are using to rally the progressive community to take control of Alameda.”

At the state level, the prospects for renters is not exactly rosy either, although there is potential for relief. Assemblymember Rob Bonta, D-Alameda, led a push in February to repeal the Costa Hawkins Act, the state law that greatly limits the ability of California cities to enact tough rent control measures. Members of the Alameda Renters Coalition trekked to Sacramento to support Bonta’s bill, but it died in committee, after facing strong pushback from landlords. But Bonta says there’s still hope for renters. He recently introduced a bill that aims to establish just cause on all rental housing in the state. He said the legislation was inspired by the last round of evictions at Alameda’s infamous Bay View Apartments at 470 Central Ave. “That’s when we came up with the idea,” he said of the evictions last Christmas. “It was clear with the ordinances Alameda has, that it was not helping these people and that we could do better.”

Tenants’ activists are also collecting signatures for a statewide measure that would repeal Costa Hawkins — although the initiative faces an uphill battle. Apartment owners groups are expected to spend heavily against it if it qualifies for the ballot.

If there is any bright spot for renters in Alameda, it comes from an unlikely place — Alameda’s Rent Review Advisory Committee, or RRAC. The panel was created by the weak tenant protection measure enacted by the council in March 2016, and it includes an appointed group of landlords, tenants, and a neutral person. The RRAC is tasked with essentially mediating rent increase disputes. It has become more professional recently and, more importantly, renters say, increasingly fair.

Under Alameda lawyer Jeff Cambra, who was appointed by the mayor last year and subsequently became the RRAC chair last summer, the panel has begun to function more effectively. When tenants and landlords argue their cases in front of the RRAC on rent disputes, Cambra makes a point to ask the opposing sides whether they learned anything new from the other in order to reach agreement. “The important thing is you have to respect both sides,” he said in an interview. “It’s warm and fuzzy mediation. I’ll be the first to admit it.”

An out-of-town landlord who participated in his first RRAC meeting in March said he believes the format was fair despite not getting his original request for a $368 a month rent increase. Instead, after the RRAC process, he and the tenants settled for $129 a month hike.

Milt Friedman, who was appointed to the RRAC as a property owner but often sides with tenants, noted that renters often face severe financial challenges because of the high costs of housing. He noted that in a recent RRAC case, the breadwinner of a family that emigrated from Nepal testified that she spends half of her salary on rent. “They’re immigrants working hard, and I don’t sense they can afford more,” said Friedman. Outside the hearing, the landlord, apparently showing no hard feelings, told the tenants that a new stovetop, which the tenants had told the RRAC they needed, would be delivered the next day.

But not all matters in front of the RRAC are warm and fuzzy. Earlier this year, a trustee for one property petitioned the RRAC to hike rents by 133 percent, which would have raised the rent on a three-bedroom Alameda townhome to $3,500 a month. RRAC members countered with a recommendation of a $750 increase, but the trustee turn down the proposal. Later, after the matter went to the city council, the trustee and tenants agreed to stagger the increase over the next year, topping out at $3,000 a month.

The situation was resolved, but for renters, the case pointed out basic flaws with Alameda’s tenant protection law: It still heavily favors landlords, and it blocks the RRAC from imposing smaller rent hikes. If landlords win again November, it’ll remain that way in Alameda for years to come.

This report was originally published by our sister publication, Alameda Magazine.