Brave voices are nothing new, but now we're finally hearing them. 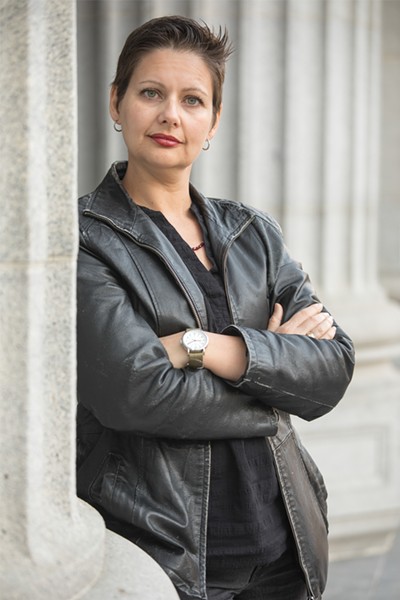 The first time a friend confessed to me that she'd been raped, we were both 12 years old. Since then, there have been many more friends, and I've been involved in working to end sexual violence in many ways: in campus activism in college, as a full-time rape crisis counselor at Bay Area Women Against Rape, and as a novelist who strives to portray the truths of women's lives. Throughout all this, I have kept my personal experiences mostly out of the picture, because I am not a rape survivor — which, statistically, makes me one of the "lucky ones" — and I wanted to center the voices of women whose stories needed to be heard.

But the current wave of the #MeToo movement — founded by the visionary activist Tarana Burke, now sweeping over us — expands the spectrum to all women who've not only been raped, but also sexually assaulted or harassed. Which reveals that the "lucky ones" have their stories, too. Who among us has really been spared?

And if all of us spoke, just imagine the roaring.

I think of my teens and early 20s, and the haze of trying to navigate male aggression in public spaces. I think of the various men who've rubbed their erections against me in public spaces without consent. I can't conjure a single face, but even though these things happened 20 years ago, I can still recall the burn of shame and powerlessness, the way I seemed to shrink in relation to the park or train or library in which I stood or sat. And what about the college professor who put his hand on me and attempted to sexualize my visit to office hours, with the door closed, preying on my intellectual drive? Or the large man who looked up my skirt and then tried to block me into an elevator? I was 19. My skirt was long. My hair was braided, and I only remember that because later I wondered, twistedly, illogically, whether perhaps my braids had caused the attack. It wasn't rape. I barely made it out of the closing doors and raced up the parking lot stairwell, managing to save myself. Blind luck: He chose not to follow me. And yet, for months, in my nightmares, he returned to chase me up the stairs, and when I made it into my car he raised the vehicle up and shook it with his bare hands.

As I put these incidents into words, I am struck by how ordinary they are, how utterly enmeshed in the fabric of our everyday mainstream culture. This, simply put, is how female bodies are treated. Most of us are more inured to ho-hum sexual harassment and assault than we may realize. Rape culture permeates. It leaks in everywhere. It is the air we breathe. It begins in the cradle and stretches on through the double standards of childhood. It shapes pop culture and defines the top tiers of power. In that context, incidents like the ones I've described here are "no big deal," something to "get over" and forget. And many of us do. Until #MeToo, I hadn't thought about that professor for years. Now I'm a professor myself, and I'm disgusted on behalf of the undergraduates who come to my office hours, eager, open-faced, deserving.

Most of us are more inured to ho-hum sexual harassment and assault than we may realize. Rape culture permeates. It leaks in everywhere. tweet this

I was raised to accept this as the way of the world. I grew up with a controlling, patriarchal father — and this is difficult to discuss in mixed company, so let me state for the record that not all immigrant or Latino men are like this — who believed that boys or men couldn't control themselves, and if they raped a girl it was because the girl had failed to protect herself. I was also taught to obey my father until I obeyed my husband. (Spoiler alert: I married a woman and things did not go even remotely according to plan.) The core message was:

1) Protect yourself from men. That is your job.

2) Obey men. You exist to please them.

3) It's inevitable that men will rape.

And if rape culture permeates, how do we make it stop?

The answers, of course, are many, and complicated. Here is one thought: Right now, there is an opening. Brave women are nothing new, raised voices are nothing new — we can all re-read our Audre Lorde and our Glorias (Anzaldúa, Steinem) and even reach back to Mary Wollstonecraft and Sojourner Truth for perspective on the length of the journey we're still on. What's new here is the level of listening, of response. And this makes me think of a woman I met many years ago, whose words have stayed with me. I was her counselor. She was an undocumented immigrant who crossed the border without water, had been raped, and now was living in terror of both La Migra and her boss, who was sexually abusing her. She spoke no English. She felt alone. Each week in the counseling room, she unfolded a little more of her story. She wept. She talked. She wept and talked some more. Finally, one day, she said, "You know, now I understand what hell is."

She was a devout Catholic and believed in hell as more than a metaphor. I thought she knew more about living hells than a person ever should. I thought she might say hell was crossing the desert without water, or being raped, or living in daily fear of one's boss. I waited.

May our great collective listening continue to undo hell. May it shape the future.