Why Aren't There More Latinx Nights in Oakland?

Venue owners and DJs say lack of consistency and promoters is partially to blame. 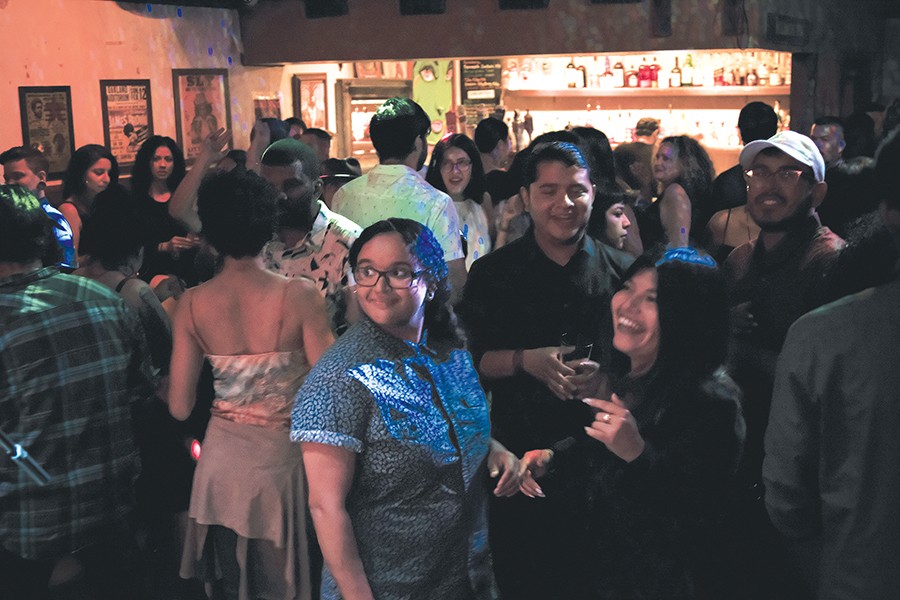 In September, Colombian-American singer Kali Uchis played a packed, sold-out show at the New Parish, performing Latinx classics in addition to her more pop-oriented hits. A week and a half earlier, the legendary Mexican rock band Café Tacvba also played a sold-out show at the Fox Theater. It's clear that there's demand for Latinx music in Oakland.

Yet go to any downtown bar or club and you're unlikely to hear Latinx music piping from the speakers. Oakland has an abundance of DJ nights aiming to please a wide variety of music lovers: Looking for R&B and hip-hop? Parliament, Liege, SomaR, Era, and Luka's have you covered. Want to listen to jazz? Look no further than Yoshi's, The Sound Room, and The Octopus Literary Salon. Interested in eclectic international sounds? The Layover, Bissap Baobab, and Studio Grand are sure to have something on any given night.

Does Oakland nightlife have enough Latinx nights? The answer depends on whom you ask.

Bobby Ganush, aka DJ Bobby Gee, is the booking manager at The Legionnaire Saloon, where he has also served as a resident DJ for the past five years. Since taking over the position a year and a half ago, Ganush has consistently booked Latinx talent. Chulita Vinyl Club, the "womxn of color" DJ collective, spins soul, funk, punk, cumbia, and more every second Friday of the month. On Wednesdays, The Slappy Hour features DJs who throw in Latinx sounds during their sets. DJ Mexican Spitfire also has a monthly happy-hour gig every third Friday of the month.

"Momentum is growing," Ganush said. "But a few years ago, when there was a lack of spaces, that influenced [the lack of] Latinx nights."

One of Ganush's most successful Latinx events at The Legionnaire is It's Lit, a party hosted by Sonido Clash, a San Jose cultural arts collective that explores the diaspora of old-school, traditional, and emerging Latinx sounds such as cumbia and sonidero, a type of cumbia popular in working barrios across Mexico in which DJs talk over the booming music. (The next It's Lit will be held Dec. 30.)

"Taking risks is absolutely necessary," Ganush said. "Some venues profit based on who they cater to — the disposable bracket."

Argentinian DJ Juan Data, who spins at The Layover every fourth Thursday of the month, said there would be more Latinx nights if there was a larger audience. "Attempts for Latin nights failed," he said. "Other DJs tried to build a Latin scene, but Latinos rather go to the City than party in Oakland."

Juan Data's Stronghold Sound at The Layover began as a Latinx night. At the time, more Latinx fans were attending his monthly Thursday soiree. Eventually, the crowd diminished, and he was forced to play other genres such as hip-hop and funk. On occasion, he plays some Latinx tracks in between.

Juan Data is part of a core crew of DJs who have tried to hold down the Latinx scene in Oakland for years, among them DJ Santero, El Kool Kyle, and DJ Rabeat. Recently, Santero and El Kool Kyle have teamed up with DJ Mr. E from San Francisco to produce Latinx cruises out of Jack London Square Marina. Their Selena- and Celia Cruz-themed cruise parties were a success.

"As a DJ, you have limited resources to promote a party," Juan Data said. "Venue owners only give you one chance for a trial run to see if a party is successful."

Juan Data partly blames the continued stigma associated with Oakland — despite how much the city has changed — for the absence of more Latinx nights. "There's still a fear in Oakland of certain social classes of Latinos." He also blames the lack of Latinx promoters willing to put in the work to build a successful and profitable Latinx nightlife scene.

Jason M. Bradford, owner of Parliament in Old Oakland, shares this sentiment. "There isn't a leading promoter to lead the Latinx nights," he told the Express. "There's also still segregation within the community. They don't want to mix within the culture."

Bradford, who has been in the nightlife business for 15 years and opened Parliament four years ago, has built a successful following based on the quality of his events and the DJs he hires. His Thursday night Trapsoul party has become one of the most well-attended parties in Oakland. Another popular night, The Love Dealers, features San Francisco DJ Mind Motion, who also deejays Chuy Gomez's show on Hot 105.7 FM.

"What I find is that Latinx DJs — other than Mind Motion — don't really promote their Latin roots," Bradford said. "On his nights at Parliament, Mind Motion will mix some Latinx tracks — and the crowd's response is positive — but not [enough] to spin that music all night." (Chuy Gomez and DJ Mind Motion host a Latinx party on Friday nights at The Grand Nightclub in San Francisco.)

Bradford believes a pivotal player is needed to bridge the socioeconomic and demographic gaps within the Latinx community in order to have thriving and consistent Latinx nights in Oakland. For example, there are those who solely listen to salsa or Mexican music, while others listen to all genres of Spanish-language music.

Diego Herrera, aka DJ Mr. Lucky of collective Sazon Libre, spins at Turn It Up, which takes place at The Layover every second Friday of the month. It features an eclectic mix of sounds, including some Latinx tracks.

Herrera, like Bradford, also believes there needs to be consistency and a key player — although not necessarily a promoter — to break the barriers within the Latinx community and build successful Latinx nights in Oakland. "It boils down to the venue and investing the time to make a party successful," he said.

Herrera says there are many factors that contribute to making a party lucrative. "Some parties have to bounce from one venue to another," he said. "It's about community success versus monetary success.

"At the end of the day, it's about what the venues are willing to invest in," he continued. "If the venue is not invested, a Latinx night simply won't happen. The Latinx DJs are there, ready to do some work."