Why 500 People Ate Lunch Together in West Oakland

The People's Kitchen Collective's free meal served as a history lesson, an act of resistance, and a celebration. 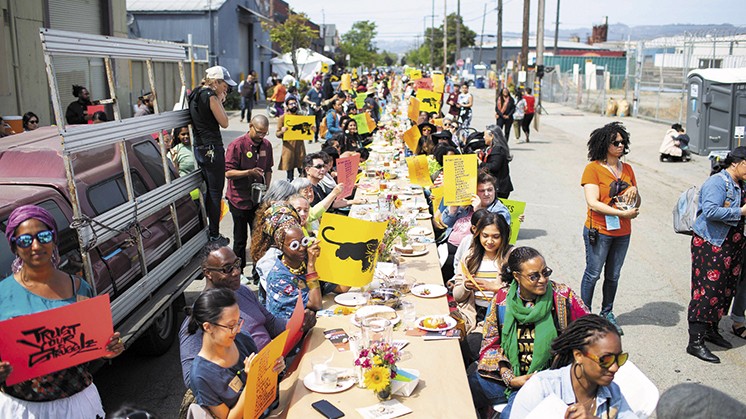 On a windy Sunday in May, hundreds of people streamed into a neighborhood in West Oakland to have lunch. A long table stretched a full block in the middle of Magnolia Street, with jars of pickled carrots, cumin compound butter, and sunflowers, eucalyptus branches, and pink Peruvian lilies beautifully laid out.

They were there to eat — but also to protest, remember, and celebrate.

The event was organized by the People's Kitchen Collective, a wide-ranging food, social justice, and art project based in Oakland, as part of its four-part series "From the FARM to the KITCHEN to the TABLE to the STREETS!" With funding from the Kenneth Rainin Foundation, the series was a critique of the farm-to-table movement, which collective members say often neglects the contributions made by people of color to the food we eat. The West Oakland event aimed to use hospitality as a radical act by deliberately centering a meal on people of color and serving dishes that push against Eurocentric norms.

"Our recipes tell us who we are. Our recipes are a political act," Saqib Keval, the original founder of the People's Kitchen Collective, told the crowd. "They're documents that tell us our histories of migration, of displacement, of revolution, of rebellion. These are dishes that have fed our movements and kept us alive."

"Our recipes tell us who we are. Our recipes are a political act." tweet this

Throughout the two-hour meal, there were performances, speeches, and questions. Audee Kochiyama-Holman, the daughter of activist Yuri Kochiyama, told a story about her mother's own gatherings over food, including one time Malcolm X came over to meet a group of Japanese survivors of the atomic bomb. Oakland-based Ohlone food project mak-'amham served a trio of teas and explained their fight to preserve indigenous culinary traditions. Youth arts group Young Gifted and Black performed a stirring mix of raps, songs, and chants that spoke both to deep trauma and hope. In many ways, it was about connecting struggles.

The food itself was bountiful and soulful with a celebratory picnic feel: salad, cornbread, collard greens, heirloom beans, and pulled chicken were all passed around family-style. It managed to reflect on the Great Migration to West Oakland, yet also taste inherently intersectional. The salad was dressed with tamarind. The beans featured turmeric and other spices.

Collective members Keval, Sita Kuratomi Bhaumik, and Jocelyn Jackson purposefully held the event in West Oakland, which is one of the Bay Area's most active and tense sites of gentrification. The particular intersection of the event, at Magnolia and 28th streets, was also the same place where Oakland police officers killed 17-year-old Bobby Hutton 50 years earlier.

That attention to history and context, and the collective's desire to center the histories and food of people of color, was embodied in every detail — from the ingredients to the playlist to the poetry. And their decision to feed 500 people for free was inspired by the Black Panthers' Free Breakfast Program.

There was solemnness, yes, but also a celebration of life, joy, and resilience. It felt more like a family reunion than a typical pop-up dining experience. Familiar pillars of the community were present: art gallery owner Ashara Ekundayo, Red Bay Coffee's Keba Konte, and Karen Seneferu, who curated The Black Woman is God art exhibit. Some guests were so excited that they never actually sat down, instead choosing conversations, hugs, and eating while standing up. And many people remarked that the large crowd — predominantly Black, with Asian, Latinx, and white folks, too — looked like Oakland. 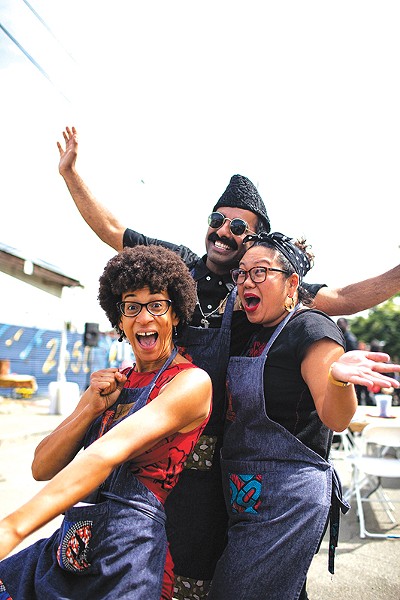 Although the members of the People's Kitchen Collective don't necessarily believe serving soul food in the street can stop the displacement of Brown and Black residents, they hope the meal served as a platform for people in the community to get together and discuss how they might combat such issues. At one point, they even assigned a writing exercise, asking every guest to contemplate what their neighborhood needs and what they can personally offer it.

What connections were made possible by that day? What movements are growing? It might be impossible to quantify, but the event succeeded in prioritizing the experiences of people of color in a way that felt deeply humanizing and empowering. At the same time, it demonstrated just how rare those feelings can be — even in the East Bay.

The word "decolonization" gets thrown around a lot in today's food dialogue, but that's a fairly recent development. Keval, however, started dreaming up his own decolonized restaurant model ten years ago, which eventually spawned People's Kitchen Collective.

As a Bay Area-born, fine-dining chef trained in France, Keval wondered how you could deconstruct the prevailing restaurant model and create something radically new. To Keval, it's inherently problematic that the default kitchen structure is based off of the French military. "Its roots are really deep in this Eurocentric, militarized way of functioning," he said. "With that comes the patriarchy, all the homophobia, all these deeply rooted systems of oppression."