While Oakland Is Worried About Getting Coal, Richmond Is Covered in It 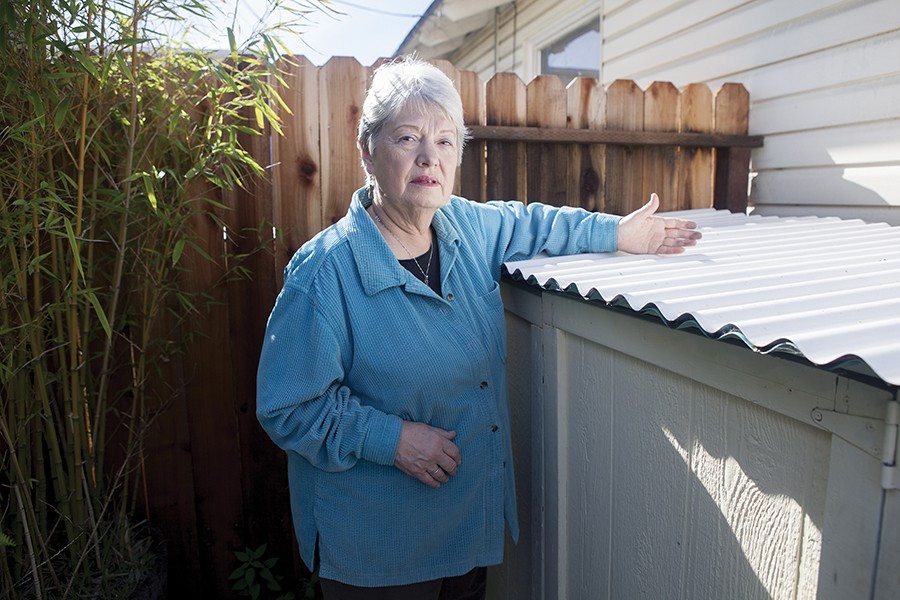 In October 2014, Sylvia Hopkins first noticed the line of coal cars sitting on tracks close to her home in Richmond's Atchison Village. Shortly thereafter, she began to discover black, greasy deposits on her windowsills. "I went on the 'Toxic Tour' of Richmond in 2015," she said. "I saw the uncovered coal piles directly in the line of winds blowing from the bay."

Her lungs, she said, "are not what they were," and she lays blame directly on the coal and petcoke shipments going through the Levin-Richmond Terminal, a privately owned marine terminal that began exporting coal in 2013 and has been exporting petroleum coke, the byproduct of oil refining known as "petcoke," for decades. Records show the terminal has ramped up its coal and petcoke shipments during the last three years.

Hopkins was not the only one who noticed. Andres Soto, a longtime community activist who now is with Communities for a Better Environment, began seeing multi-car coal trains sitting on the tracks next to the BART station in Richmond four years ago. "And the Phillips 66 refinery in Rodeo is producing huge amounts of petcoke for export to Asia and Latin America," he said.

During the past few years, the city of Oakland has been ground zero for local environmental groups concerned about coal because of the efforts by Oakland developer Phil Tagami to ship coal through a new marine terminal he's building at the former Oakland Army Base. But while the controversy in Oakland has gained considerable attention, the increased coal shipments through nearby Richmond have largely gone unnoticed.

Moreover, the coal shipped through Richmond comes from Utah and Colorado mines owned by the same Kentucky-based company that is partnering with Tagami in Oakland: Bowie Resource Partners. Last month, during a trial over Tagami and Bowie's Oakland plans, Tagami acknowledged that the problems created by coal in Richmond are likely worse, because he said the facilities there use "19th-century" technology, which allow coal dust to spread more readily.

A recent series of community meetings in Richmond, sponsored by the Sierra Club, has drawn attention to the huge increases in coal and petcoke at the terminal, but this is far from the first time that the problems created by petcoke in Richmond have come under scrutiny. In 2012, Baykeeper sued the Levin-Richmond Terminal for failing to prevent petcoke and other pollutants from contaminating San Francisco Bay. The environmental group won the suit in 2014.

That same year, then-Sierra Club Community Program Coordinator Ratha Lai began canvassing residents of Richmond's Parchester Village neighborhood, which sits directly adjacent to rail tracks along which coal and petcoke are being transported. "They reported coats of black dust in their yards and homes," said Lai. "These are working-class families with many children and seniors — a vulnerable population once again experiencing environmental injustice."

"The attitude for many years has been, 'If you don't like it, move,'" added Minda Berbeco, director of the Sierra Club's San Francisco Bay Area Chapter. "That is extremely disrespectful to residents, who have had, up until now, no say in this."

Petcoke, which visually resembles coal, contains multiple carcinogenic heavy metals, including arsenic, mercury, lead, and vanadium. Inhaling the particulates, which are smaller than those of coal, can cause serious respiratory issues, and samples collected near the Levin-Richmond petcoke piles show high concentrations of heavy metals. Coal and petcoke transport and handling releases these particulates, with petcoke producing potentially five times as much dust.

In May 2015, the Richmond City Council passed a two-part resolution asking the Bay Area Air Quality Management District to regulate the storage, handling, and transportation of coal and petcoke, along with another resolution "opposing mining, export and burning of coal, and the transportation of coal and petroleum coke ('petcoke') along California waterways and through densely populated areas." But these resolutions, acknowledged Richmond Councilmember Jovanka Beckles, are not binding on the Levin-Richmond terminal. Unlike the situation in Oakland, which involves a new facility, the Richmond terminal operates under older ordinances and permits.

Richard Mitchell, city of Richmond planning director, did not return phone calls and emails asking whether the terminal has a permit that allows it to increase its coal and petcoke exports. Levin-Richmond Terminal officials also did not respond to multiple requests for comment for this report.

Contra Costa County Supervisor John Gioia, who represents the Richmond area and also sits on the air district board, noted that the district is finalizing new regulations to more strongly control emissions from bulk handling operations. Community activists have prompted the board to re-review the language and possible enforcement effectiveness of the proposed changes, which in their original form, did not address measuring nightly emissions and did not assign an independent emission monitor.

Gioia also pointed to the implementation of Assembly Bill 617, the "Community Air Protection Program," in which Bay Area Air Quality Management District will work with the California Air Resources Board to measure emissions in Richmond from various sources and develop an emissions reduction plan. A monitoring system must be deployed by July 1, 2019, and by October 1, 2018, the state air board must have in place a statewide strategy "to reduce emissions in communities affected by a high cumulative exposure burden."

Federal interstate commerce laws regulate the shipping of substances such as coal and petcoke. Therefore, very little can be done at the local level to control how coal and petcoke are shipped across state lines to existing marine facilities.

But Soto said activists are looking closely at anti-coal actions taken in Oregon and Chicago, which address existing coal shipping, to see how they might apply here. The city could potentially change zoning regulations to affect storage and transport of coal and petcoke.

At a Jan. 17 community meeting, Sierra Club volunteer Julia Walsh, who first brought the increases in coal and petcoke exports at Levin-Richmond to the attention of the Sierra Club, announced that the San Francisco Bay Regional Water Quality Control Board had scheduled an inspection of the terminal to take place by the end of January. Walsh had contacted the water board and was notified by email of the inspection.

Richmond Councilmember Eduardo Martinez told attendees that he would ask city staffers to research the terminal's current permits and shared the news that the city is joining other eight other California communities in suing fossil fuel companies — including coal — for "knowingly contributing to climate change" and sea level rise. City officials said in a statement that "the science is clear that greenhouse gas pollution from fossil fuel companies is warming the oceans and atmosphere, causing sea levels to rise, and increasing the frequency and severity of heat waves, droughts, and extreme precipitation events."

The lawsuit speaks to the even bigger issues involved in the Levin-Richmond Terminal's continued exports, according to Soto, Walsh, and Berbeco.

"We are allowing poison that we say is too toxic for us to be sent through our port to pollute other places in the world," said Soto.

"The continued use of coal and petcoke is contributing to global warming," added Walsh.

Berbeco summed up: "The larger issue of global climate change is impacted here. We are exporting our environmental problems elsewhere."

Correction: The original version of this report understated the amount of coal and petcoke going through the Port of Richmond in 2013 and 2017 by a factor of one thousand.