Ever wonder what happened to former Express writers, editors, artists, and contributors? We compiled a (non-comprehensive) list of 40 former EBXers. 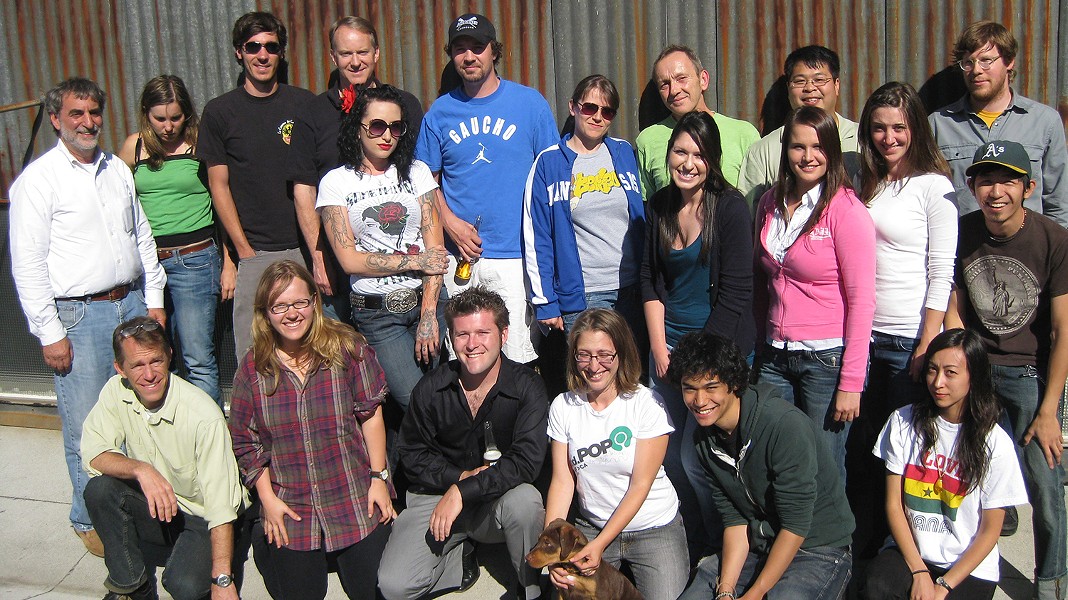 Ali Winston (contributor): After working at Reveal and freelancing for ProPublica, Ali is now an investigative reporter for The New York Times' metro desk, covering surveillance, privacy, and criminal justice.

Anneli Rufus (books editor): Anneli has spent the last few years writing nonfiction books such as Unworthy: How to Stop Hating Yourself and Stuck: How We Can't (or Won't) Move On, and freelancing for other publications including TheDailyBeast.com, Oakland Magazine, and Psychology Today.

Brian Kelly (art director): Brian works for Cost Plus World Market, and after hours he writes and records music under the name Oceanography.

Chris Thompson (staff writer): Chris was a staff writer for the Village Voice and then wrote for Slate magazine, City & State newspaper, and CorpWatch. He died in 2016.

Dashka Slater (staff writer): Dashka is the author of nine books for children and adults, including the acclaimed 2017 release The 57 Bus. She's also an award-winning journalist who writes for The New York Times Magazine and Mother Jones.

David Downs (contributor): After serving as a cannabis editor at the San Francisco Chronicle, David is now the California bureau chief for Leafly.com.

Ellen Cushing (staff writer): Ellen was an editor at San Francisco Magazine and BuzzFeed News before becoming senior editor for The Atlantic.

Eric K. Arnold (clubs editor): Eric has been freelance reporter covering music, arts and culture, news, and media issues and is now a communications specialist for Urban Releaf in Oakland.

Joaquin Palomino (contributor): Joaquin in an investigative reporter for the San Francisco Chronicle.

Jonathan Kauffman (staff writer): Jonathan was a food critic for Seattle Weekly and SF Weekly before joining the San Francisco Chronicle, where he focuses on the intersection of food and culture. His first book, Hippie Food: How Back-to-the-Landers, Longhairs and Revolutionaries Changed the Way We Eat, was published in 2018.

Kara Platoni (staff writer): Kara is freelance writer for Smithsonian, Popular Science, Air & Space, and other magazines and wrote the 2015 book, We Have the Technology: How Biohackers, Foodies, Physicians and Scientists Are Transforming Human Perception. She's also a lecturer and assistant dean for students at UC Berkeley's Graduate School of Journalism.

Lee Hildebrand (associate editor): Lee has written for Living Blues magazine, the San Francisco Bay Guardian, the Oakland Post, and the San Francisco Chronicle. He also has authored and edited several books, including Hammertime; Bay Area Blues (with photographer Michelle Vignes); Colors and Chords: The Art of Johnny Otis; and Images of the Blues.

Linnea Due (senior editor): Linnea became the editor of Terrain magazine, a freelance writer, and award-winning author of High and Outside and Joining the Tribe: Growing Up Gay and Lesbian in the '90s.

Nate Seltenrich (clubs editor): Nate is a freelance journalist covering science and the environment, both in the Bay Area and nationally.

Paul Rauber (staff writer): Paul is a senior editor for Sierra, the national magazine of the Sierra Club.

Rachel Swan (staff writer): Rachel was a reporter for the Daily Journal and SF Weekly before joining the San Francisco Chronicle as a staff writer.

Rob Harvilla (music editor): Rob is a staff writer for The Ringer.

Sam Lefebvre (music editor): Sam became a freelancer for The Wire Magazine, Pitchfork, the Guardian, and The Fader and is now a staff writer for KQED Arts.

Stefanie Kalem (books editor): Stefanie now works in the marketing communications cog of UC Berkeley's campus-wide fundraising machine; volunteers at KALX-FM (as herself for public affairs programming and under the DJ name Agapathus); and sometimes still even writes.

Will Harper (staff writer): Will became managing editor of SF Weekly and city editor for the San Francisco Examiner before becoming a community and media relations specialist for the Contra Costa Regional Medical Center & Health Centers.

And, finally, a note from co-founder and longtime editor John Raeside, who is now a development editor and editorial consultant in Oakland:

Where are they now? Dick Metsker.

Emerging from deep in the mists of time, long before the age of Twitter, longtime readers and contributors will recognize the name one of this paper's most prolific contributors to the Letters column, a notorious troll named Dick Metsker of Montecito Drive in Oakland. For decades, it was the policy of this paper not to print any complimentary letters to the editor, arguing that such letters were boring. For Mr. Metsker, however, the column was fertile ground from which he used to bitterly savage the paper and its writers.

Some students of Express history have always been curious about the disappearance of Metsker and date that absence from the sale to new owners in 2002 and the departure of its original editor.