Where to Buy Legal Weed in the East Bay on Jan. 1

Here are 14 places in Oakland, Berkeley, and Richmond that can legally sell marijuana for recreational use in the new year. 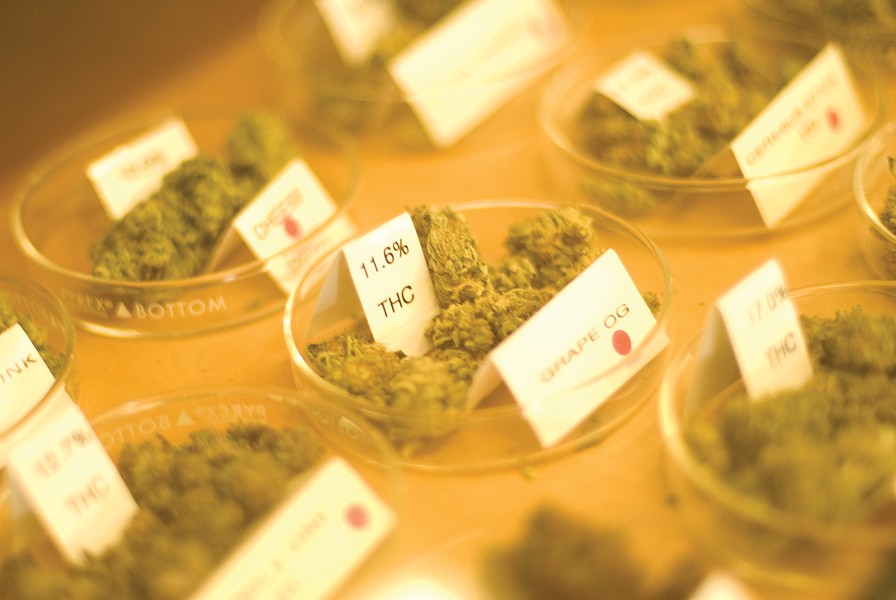 Proposition 64 legalized the recreational use of weed in California last year, and the law goes into effect on Jan. 1. Throughout the state, the cities and counties that have managed to approve ordinances governing cultivation, transportation, and the retailing of pot are typically those that have a history of tolerating and supporting the medical cannabis industry. In the East Bay, the cities that have prepared to serve this thriving new market on Jan. 1 are Oakland, Berkeley, and Richmond. These cities have embraced the sale of adult-use cannabis and will be among the first to collect millions in tax revenue generated by the new marijuana marketplace.

However, the complexities of the new law and what it means to stakeholders, local residents, and law enforcement remain uncertain, and even cities that are ahead of the curve have approached the situation with caution. As of Dec. 11, Oakland was the only East Bay city that had approved a new ordinance and regulations based on Prop. 64. Richmond and Berkeley have yet to approve a permanent ordinance that will oversee the retailing, cultivating, and manufacturing of cannabis products. However, all three cities have approved temporary permits that will allow their existing medical cannabis dispensaries to sell pot for adult use as of Jan. 1 (many outlets will be closed on Jan. 1, so you won't be able to actually purchase legal weed until Jan. 2).

Oakland's city government has been on the cutting edge of crafting cannabis policy since California voters approved Proposition 215, the Compassionate Care Act, in 1996. The city, which is often referred to as the "Spiritual Homeland" of pot policy, is again forging new ground for the industry's next phase. Oakland is the first city to include in its ordinance the concept of "equity partners," which is designed to create opportunities for community members who have been disproportionately oppressed by marijuana laws over the years. And the disparity in enforcement of pot laws is significant. According to a February 2017 report by Oakland's Office of the City Administrator, African Americans accounted for 77 percent of the city's cannabis-related arrests in 2015. During the same period, Hispanics accounted for 15 percent and whites represented just 4 percent of the arrests — even though numerous studies have shown that whites use cannabis as much or more than other racial and ethnic groups nationwide.

To establish a more equitable cannabis industry, the city's ordinance requires that half of all new applicants for new cannabis-related city permits include an equity partner. To qualify as an equity partner, applicants will have to have an annual income of 80 percent or less than the city's median income, reside in one of 21 designated police beat areas with traditionally high marijuana arrests, or have been convicted for a cannabis-related crime after 1996. Only new applications are subject to the equity partner requirement; the existing eight permitted dispensaries are not. Oakland's equity partner requirement is groundbreaking and has been adopted in San Francisco's ordinance.

Oakland's ordinance added eight dispensary permits for the coming year. "We just closed an application period for the eight new dispensaries, and we received a total of 116 applications, 69 equity applicants, and 47 general applicants for their respective four and four available permits," said Oakland Assistant City Administrator Greg Minor, referring to the four equity and four regular permits for dispensaries that the city is allowing next year. "I expect this next eight won't be up and operating until spring or summer of 2018."

In its new ordinance, Oakland has removed the distinction between medical cannabis and adult-use business dispensary permits. So, the eight existing medical cannabis dispensaries will be eligible to sell recreational weed on Jan. 1. Keep in mind, however, that medical cannabis will not be subject to the new sales taxes for legal pot (which is 10 percent in Oakland and Berkeley). So, if you have a doctor's recommendation, medical weed will be cheaper.

If you're in Oakland and over 21 on Jan. 1, here are the places (in alphabetical order) where you can buy legal weed:

Berkeley also has been at the forefront of the cannabis revolution. The famously progressive city was among the first to welcome medical cannabis dispensaries after the passage of Prop. 215. In fact, the Berkeley Patients Group, which celebrated its 19th anniversary in November, is the longest continually operating dispensary in the United States.

Showing its support for medical cannabis, the Berkeley City Council formed an official cannabis commission that oversees weed-related activities. The city has authorized permits for six medical cannabis dispensaries, though only three are in operation. The other three have been awarded to businesses that have not yet begun to operate. The city has not officially authorized cannabis cultivation, but it's a poorly kept secret that many warehouses in West Berkeley are used by growing operations. "We have a 'don't ask, don't tell' policy on cultivation," Councilmember Kriss Worthington told The Daily Californian. "It isn't dropping out of the sky anywhere. Obviously, someone is cultivating it, but nobody is legally cultivating it."

Like Richmond and Oakland, Berkeley has temporarily authorized the city's existing medical marijuana dispensaries to vend recreational cannabis. They can be found at these locations:

Richmond had been friendly to the medical cannabis industry — in particular, commercial cultivators. Long before voters approved Prop. 64 in November 2016, the Richmond City Council approved three dispensaries and embraced cannabis cultivation by opening the city's sprawling warehouse districts to commercial growing and manufacturing operations. The working-class city has demonstrated its eagerness to partner with the new industry, and in July, 2016, Richmond Mayor Tom Butt told the Mercury News, "We're going to be in full tax collection mode. We want the money."

Nonetheless, the city council is moving cautiously toward approving an ordinance for recreational weed dispensaries. The council is keeping an ear bent toward local residents and community organizations that are still shell-shocked from the city's violent drug wars of the 1990s and early 2000s. With that in mind, the city has issued temporary licenses to the three existing medical dispensaries that will allow them to sell recreational pot starting on Jan. 1.

Meanwhile, the city council will continue to hear from local residents and businesses before approving a final recreational cannabis ordinance.

The three locations are: