Where to buy Christmas Tamales in the East Bay 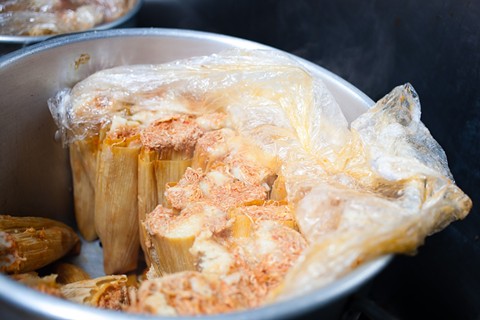 Depending on your cultural background, staples for the winter holidays might include mulled cider, ugly sweaters, or Christmas dinner at a Chinese restaurant. And in many parts of Mexico, and elsewhere in Latin America, Christmas wouldn’t be Christmas without a huge steamer full of tamales.

Given Oakland’s wealth of kick-ass Mexican food, it should come as no surprise that the city has numerous reputable tamalerias. Not every enterprising tamal cart has the capacity to crank out an entire holiday party’s worth of husk-wrapped goodness at the drop of a dime, but several of the city’s Mexican restaurants do. Here are three options to consider if you’re trying to feed a crowd:

Formerly known as Tamales Unicos de Cuernavaca, this no-frills takeout window has long been my go-to spot for everyday tamales. The tamaleria has gone through several management changes — Sergio Gomez, the owner as of the Express’s most recent review, has departed; instead, someone who identified himself as “Juan” now appears to run the business. But through each incarnation, the tamales have remained excellent: light and fluffy, surprisingly spicy even without salsa, and probably 50 percent larger than your average street tamal to boot. The best part is the masa, which is extra-savory thanks to the addition of lard in all but the vegetarian versions.

Tamaleria Azteca sells pork, chicken, cheese, vegetable, and sweet corn tamales priced at $3 each, $5 for two, and $25 for a dozen. Call ahead at least two days in advance for large orders. Note that Tuesday, December 20 was the last day to put in your order if you want to pick up your tamales on Christmas Day.

If you would like to have mole in your tamales, you won’t find a finer option than this tiny West Oakland tamaleria, which specializes in Oaxacan-style tamales. These are wrapped in banana leaves instead of corn husks and often feature mole as part of the filling. For Christmas, Tamales La Oaxaqueña will offer three varieties of the banana-leaf-wrapped style (chicken or pork, both with mole rojo, plus a vegan option) and three of the more common corn-husk-wrapped variety (chicken with green salsa, pork with mole rojo, and a vegetarian cheese-and-poblano option). The only downside is that there’s no bulk discount, and, at $4.50 a pop for the banana-leaf-wrapped tamales ($3.50 for the corn-husk variety), the bill can add up. That said, co-owner Carolina Santos said she’s willing to work out a deal for huge orders. Give at least five days’ notice for large orders, which means you should give Tamales La Oaxaqueña a call, well, as soon as possible. The restaurant will be open for business as usual on December 24; on Christmas Day proper, it will probably only be open for customers picking up advance orders.

If you prefer Mexican food with a Californian sensibility, look no further than this Swan’s Market standby, where chef Dominica Rice-Cisneros serves her handmade tamales as an occasional seasonal special. For the holidays this year, Cosecha is taking orders for banana-leaf-wrapped chicken mole tamales ($26 for a dozen), as well as regular braised-pork ($26) and green chile and cheese tamales ($24). Fill out an order form at least one day in advance. You can also add a salad platter, rice and beans, and other side dishes. Pickup days are every Thursday and Friday in December, which means the last day to pick up tamales before Christmas is Friday, December 23.