Intrepid parents of America’s Girl Scouts are boosting their kids’ sales of Thin Mints, Samoas, and more by targeting pot clubs this year.

Families are setting up tables in front of cannabis storefronts, hollering out “cookies!”, and then selling boxes of cookies to marijuana users. (Cannabis is, of course, a powerful appetite stimulant that works directly on nerves in the stomach as well as the brain.) 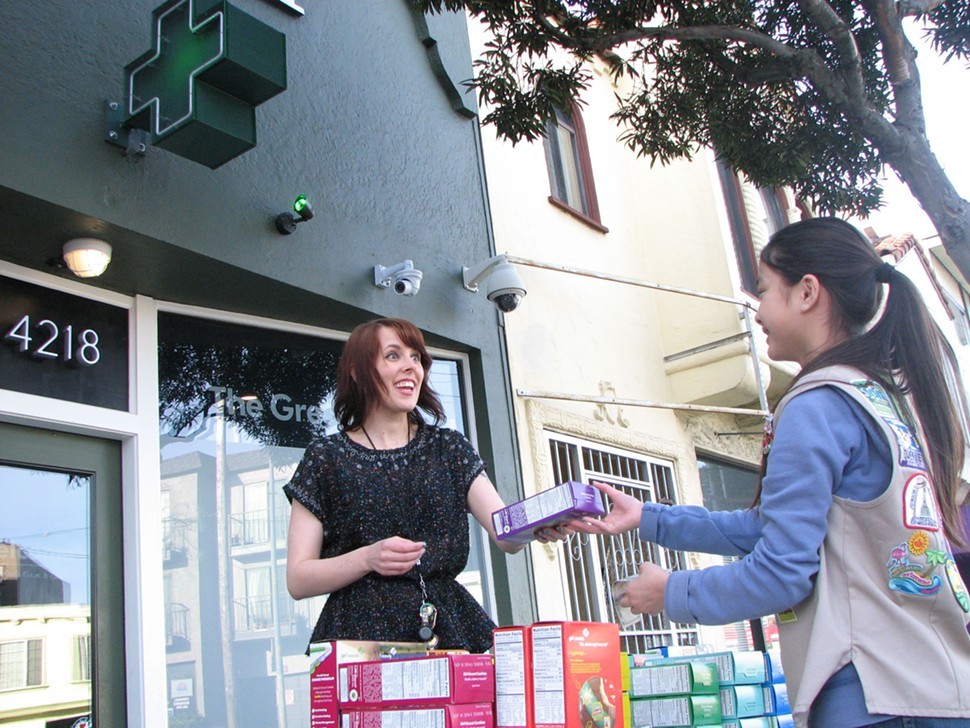 “They learn that they’re not drugged out,” said Lei. “Many have serious needs, and are just a little different.”

“And they get very hungry after!” said thirteen-year-old Girl Scout Danielle, who did brisk business Monday in front of The Green Cross dispensary on Mission Street.

“Do you want to buy some cookies!” Danielle chirped at passersby.

Some hustled past with their hands tucked into their jackets as the sun set and the wind picked up. But most smiled and stopped.

Young asian dudes rocking fresh LRG and Nikes, and aging hippies in faded denim smiled and happily handed over fivers. The Green Cross' staff came out again and again to snap up boxes.

Supervised by her mom, Danielle must perform the sales and she has until March 16 to hit her target of 1,200 boxes. Lei has sold cookies in front of three dispensaries, first at the Vapor Room in the Haight before the feds closed it, then SPARC in 2013.

“I feel like it’s safe,” said Carol who has lived near Glen Park since 1987. “There’s always a security guard and cameras everywhere.”

Selling cookies around town exposes the girls to other walks of life, Lei said. It’s made Danielle less shy.

And does she mind the aroma of weed wafting out the door?

“Um, I can’t smell anything because my nose is stuffed up.”