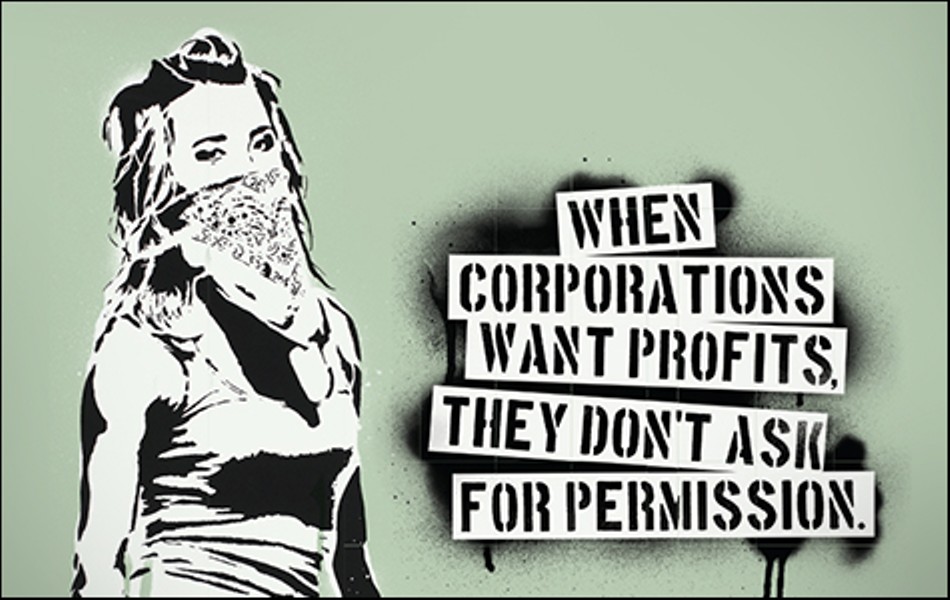 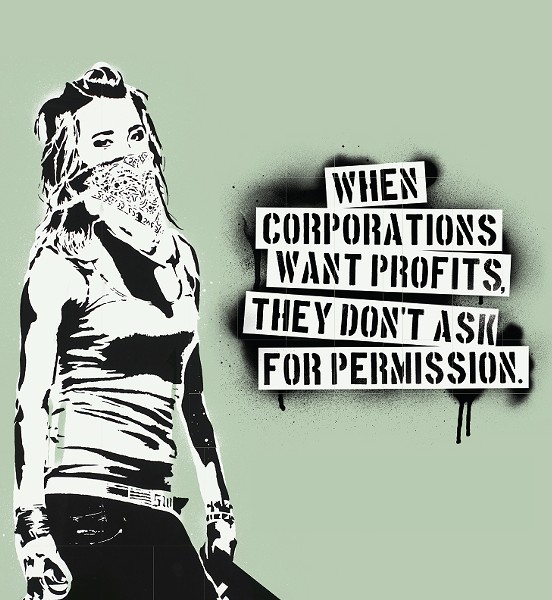 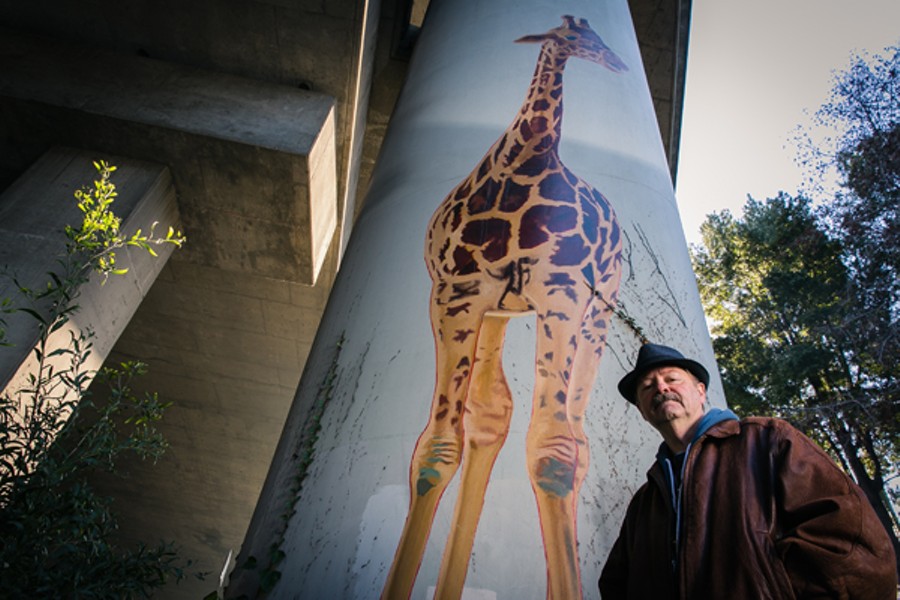 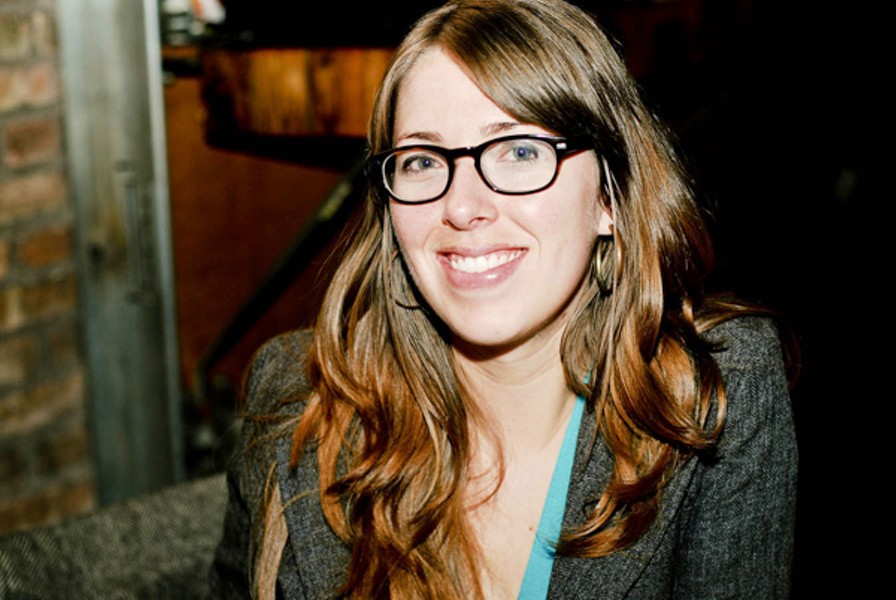 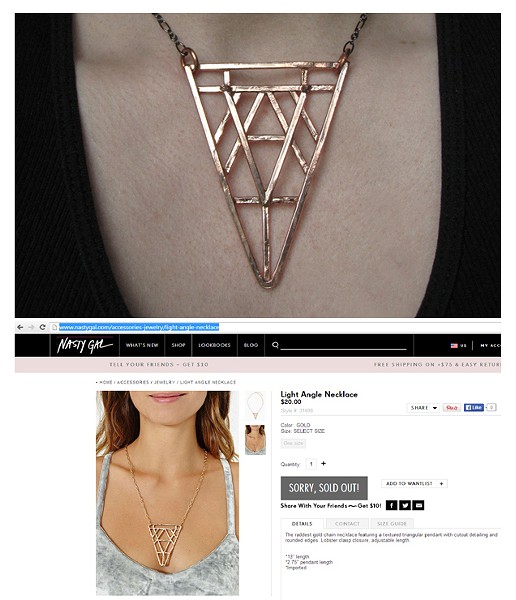 Eddie Colla often gets messages from fans and friends alerting him to advertisements on websites like Etsy and Zazzle offering blatant knockoffs of his art. Sometimes, the Oakland visual artist will reluctantly google a sentence he first wrote in 2009 that is part of one of his most popular works of street art: "If you want to achieve greatness, stop asking for permission." Those words appear in a piece titled "Ambition," which also features a woman with a handkerchief over her mouth and a can of spray paint in her hand.

The results of the search are reliably depressing. Colla, who does graffiti-style projects, will invariably find a range of bizarre rip-offs from obscure companies and websites that may be profiting from his design — with T-shirts, posters, prints, and more. They did not ask for permission. Twice, in recent years, he has even discovered other artists presenting his work as their own at galleries.

He thought he had seen it all, but a Facebook message he received in November was truly shocking: Walmart was selling an exact replica of "Ambition" — and attributing it to Banksy, the celebrity street artist.

"I fucking hate Walmart and everything they stand for," Colla told me a few weeks after he first discovered the listing. "I guess this is the natural chain of events. It can only keep getting worse. And what's the pinnacle of bad? Walmart. Fucking really? It's like why don't you just piss in my face?"

The copyright theft also carried another absurd irony: Colla has a history of directly protesting corporate greed through his art and activist work. In the early days of Occupy Wall Street in 2011, he designed a popular "ninety-nine to one" sticker that featured the iconic Anonymous mask. The Walmart.com Marketplace ad for the "Bansky" canvas, available for $25.49 ­- $66.69, also used the title "Asking for Permission."

"The idea of Walmart in any way, shape, or form entering into the world of art and art sales, I find completely disturbing," said Colla, a full-time artist in his early forties who lives and works in East Oakland.

News of the theft began to spread on social media a few weeks later when Colla offered a response to the Walmart ad, a revised version of "Ambition," called, "It's Only Stealing If You Get Caught." It featured the woman from his original image next to the words "Introducing The Anti-Establishment Left Wing Subversive Vandalism Collection." At the bottom: "Glorified Vandalism Available Now At: Walmart." He sold limited editions of these screen prints in early December and put up a temporary billboard version in San Francisco. Walmart removed the item in the wake of the media firestorm, and Colla is now exploring possible legal action.

While Walmart's fake Banksy was particularly ludicrous, Colla's situation is far from unique. Visual artists and designers throughout the Bay Area and across the country are, at alarming rates, facing copyright infringements from large retail and wholesale companies stealing their intellectual property for their own products and profit. As artists increasingly promote their work and crafts online — through Etsy or their own websites and Facebook pages — corporations are stealing their designs and mass-producing them for sale. Over the last several months, I collected stories from two dozen artists who have faced various forms of this corporate theft. They have been horrified to discover, often through the sheer luck of a colleague or fan stumbling upon a link, that companies are advertising and selling their designs without their permission ­— and, of course, without compensation. Sometimes, it happens overseas in Chinese factories. In other cases, US companies are responsible. Some involve woeful ignorance of copyright law; others appear to be more sinister. In a majority of rip-offs, the business caught in the act denies responsibility by blaming third-party suppliers or wholesalers ­— many who remain unknown.

"With the click of the mouse, you can steal content," said Ellen Seidler, a Berkeley-based filmmaker and professor at Contra Costa College who has blogged about copyright infringement for years since her independent film was widely pirated. "It doesn't somehow get perceived as theft, but it is."

If artists are persistent and have resources to go to court, the best-case scenario is that the infringer will stop selling the knockoff and pay the designer a small settlement. And almost universally, all settlements involve a non-disclosure agreement that bans the artist from speaking about the case. It's thus easy for thieves to avoid scrutiny, making this kind of art theft a calculated financial decision for some businesses. For most artists, there's nothing they can do about it. And if they want retroactive compensation, they must agree to remain silent.

"The item has been removed from our site," Bao Nguyen, Walmart spokesperson, told me in an email, regarding Colla's print. "Since it was sold through our third-party marketplace partner, we're investigating the item with them. We've instructed them to review their artwork to ensure the descriptions are accurate." Walmart, he added, chooses partners selectively based on their ability to comply with copyright requirements.

The "partner" in this case was Wayfair.com, an online home décor store that's headquartered in Boston and boasts the tagline "a zillion things home." Spokesperson Jane Carpenter told me in email that the company pulled the item from its own site and partner sites "as soon as we became aware of this situation." Wayfair, she said, works with more than 8,000 suppliers and is "looking into this matter further with the supplier who provided the prints."