What We Like: Stone Fruit, Public Art, Summer Drinking

Tanja Baker The new mural project at 3098 E 10th St. is visible from the BART train.

ART
I'm generally annoyed by Kickstarter campaigns, but this local mural project by LeQuiVive Gallery and Groundscore Collective is worth your attention and, should you feel generous, your hard-earned money. Artists Ernest Doty, David Polka, Cannon Dill, Koleo, Brett Flanigan, and Zio Ziegler have contributed their work to two large walls in Fruitvale and downtown Oakland. They're about a grand away from meeting the fundraising goal of $5,000, which will go to compensate the artists and buy supplies to paint hundreds of square feet of wall space. — Whitney Phaneuf 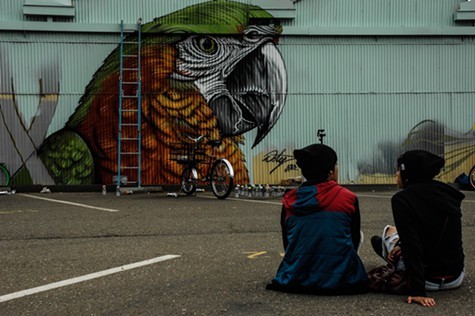 ARTICLES
In honor of YEEZUS, this Slate “profile” of Kanye West is one of the best, most creative, most trenchant-without-trying-to-be pieces of celebrity journalism I’ve ever read. — Ellen Cushing

I always knew all you marathon runners were insane and now there's proof. (Golden quote: "How did NOBODY inform me that when you start distance training you will be consumed with the constant fear that you are going to poop yourself?”) — W.P.

MUSIC
If you haven’t listened to the new Baths album, Obsidian, stop whatever you’re doing and go listen to it RIGHT NOW. You can stream the whole thing on Rdio. Also, check him out live on June 29 at the Great American Music Hall, where he’ll be playing with — I shit you not — your personal teenage angst factory, the Postal Service. — A.G.

DRINKS
Prizefighter is the best place by far to blow $50 on alcohol. Get a group together, wear some summer-sun style clothing, and get deep into one of their three punchbowls. The Mutiny on the Bounty, with gin, mint, elderflower and cherry tea, will put you over the moon and under the table at the same time. Warning: With the right group of people, one punch bowl is insufficient. (And the hangover tomorrow will probably be worth it.) Or, if you prefer a wine buzz, The Punchdown in Uptown has an outdoor patio where you can snack on cheeses and order terroir-focused "natural wines". Someone may try to tell you their down-and-out story and solicit money off of you (it's hard to make the lack-of-money argument while sipping $12 wine), but that awkwardness is offset by the premiere people-watching as folks march down Broadway, either heading home or heading out. For those who like physical comedy, there's also a bump in the sidewalk in front of Plum's facade that trips people up all evening long.
Or, you can drink at home. Try making a Mamie Taylor (if you're into Moscow Mules, you'll like this). It's pretty easy:
2 oz scotch
6 oz spicy ginger beer
1/2 lime for juicing
ice
highball glass.
Put the ice in the glass. Put everything else in the glass. Stir. Sip. — E.S.