What if They Held a Pandemic (And A Rent Strike Broke Out Instead?)

When Bay Area counties imposed stay-at-home orders to limit the COVID-19 epidemic, Richmond resident Blanca Retano lost her job as a parent educator at an elementary school. Her husband, a chef, had his hours cut to nine a week. Their three kids, ages seventeen, twelve, and eight, needed an Internet connection to keep up with their schoolwork — an added expense. Retano hasn't found it stressful to be home with her family. "I'm enjoying spending more time with my kids," she said. "I'm learning a lot from them." The stress comes from "worrying about how we're going to make it."

That's why Retano, along with other East Bay tenant activists, has been campaigning for city and county measures to protect them from eviction. Advocacy from groups including the Alliance of Californians for Community Empowerment has helped create the impetus for the eviction moratoriums recently passed by many East Bay cities, as well as Alameda and Contra Costa counties.

All of these measures seek to prohibit most evictions when renters are unable to pay for pandemic-related expenses, health problems, or loss of income. Oakland and Alameda County's measures go farther, decreeing that tenants can never be evicted for back-rent debts incurred during virus-related stay-at-home orders. They will still owe the money, but it will be considered a consumer debt like a credit-card debt. The landlord, like any creditor, could go to court to try to collect the debt, but not use it as grounds for eviction.

But Retano views such measures as insufficient to the magnitude of the coming economic crisis. So she's encouraging other tenants to join her in a May 1 statewide rent strike demanding that Governor Gavin Newsom cancel rent and mortgage payments during the state of emergency. "We're taking a risk not paying our rent so Newsom will see this is a huge issue — people can't pay their rent!" Retano said. "This is how we get our message out."

Local eviction moratorium measures apply specifically to renters. Officials have hesitated to address evictions for nonpayment of mortgages, since bank regulation is primarily a state or federal function. That's one reason housing-rights activists are increasingly calling for additional state and federal protections for both renters and homeowners. "This is such a major problem, it's too large for cities to handle," said Richmond City Councilmember Eduardo Martinez.

That a proposal as radical as a rent strike has attained such momentum and visibility is a testament to the scope of the search for answers to the growing economic crisis. Concerns about a wave of evictions whenever Richmond's new rent moratorium ends prompted Martinez to propose that rents for the months of the virus lockdown be eradicated — not just postponed. After all, a 2017 survey by the financial website Bankrate.com found that nearly six in ten Americans have less than $500 in savings. "If you have $2,000 rent for four months, then you're $8,000 in debt in addition to your ongoing rent," Martinez' council colleague Melvin Willis said during an April 21 city council meeting. "That mountain of debt is insane for anybody to pay off."

Richmond City Attorney Rachel Sommovilla expressed the opinion that a measure actually eliminating rent due during the stay-at-home order would be a "legal risk." But Martinez pointed to a letter from the Law Foundation of Silicon Valley, arguing that a suspension of the right to collect rent is legal during a state of emergency. The letter was filed in support of a similar, failed proposal to the San Jose City Council.

"The injury that society has suffered [during the pandemic] is only the first stage," Martinez said. "The severity of the second stage will be determined by how well we prepare. If we don't do the proper preparation, the second stage will be worse — the continuation of the collapse of the economy. We waited too long to address the virus. I'm afraid we may wait to long to address the economic crisis."

An Array of Action

Details of the local measures vary, but the county measures passed April 21 generally apply unless a city has stronger protections. The measures have varying end dates: Contra Costa's is May 31; Alameda County's will end in 90 days or whenever the governor lifts the state of emergency. 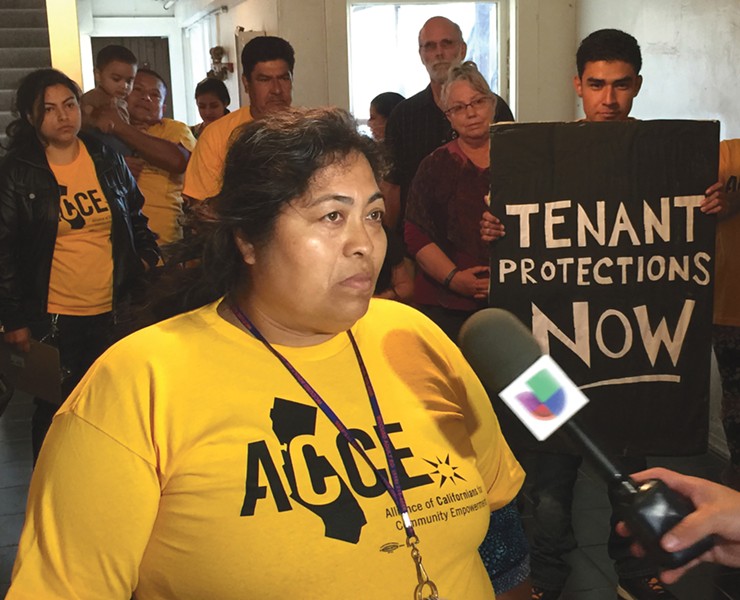 Some city ordinances, such as those in Oakland, Berkeley, and Richmond, include small businesses. Both counties ban late fees for rent due from the period covered by the ordinance and limit rent increases in rent-controlled buildings. Berkeley recently extended that protection to small businesses.

Both counties require tenants to document that they cannot pay because of the pandemic and set requirements for tenants to tell landlords they can't pay. Some tenant advocates have expressed concern that the requirement for documentation could be an unfair barrier for undocumented tenants and those with income from the informal economy. Only Oakland's measure, which was drafted by city Councilmember Nikki Fortunato Bas and is still among the area's strongest, does not require such documentation.

At recent meetings of the Contra Costa County Board of Supervisors, dozens of tenants submitted letters or spoke, remotely. Board members heard story after story from tenants and homeowners who said they had been laid off and had no money to pay rent or buy groceries — and are relying on food banks and school meal programs. An undocumented tenant pointed out that he was not eligible for federal relief programs and said the COVID-19 crisis is "forcing us into a downward spiral."