In a new Good magazine piece about the DIY Oakland hip-hop crew Sick Sad World, local writer Channing Kennedy claims to have uncovered the "1 percent of the no-budget rap game." The implication, of course, is that the "rap bohemia" he's profiled isn't just the product of artistic ingenuity and youthful enterprise, but that it also relies on a certain degree of hidden privilege. Kennedy articulates that thesis in value-loaded terms - "One Percent" being the most salient of them. He deploys is as shorthand for "elite strata" when it's actually a term for taxpayers with $380,000 adjusted gross income. He also characterizes the members of Sick Sad World as part of a leisure class, arguing that they have the luxury of time, tech know-how, art-school connections, and full Rolodexes to support their full-time arts careers. Moreover, Kennedy argues, most of the "skilled jobs" are held by white dudes. Essentially, he's attempting to portray Sick Sad World as a marriage of white technorati with young African-American prodigies from the 'hood. That's a reductive, idea, and it's not borne out by his evidence. 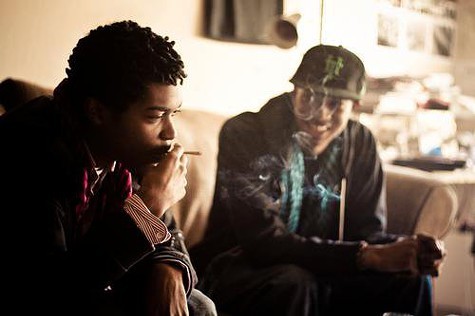 Granted, hip-hop isn't impervious to the dynamics of society at large, and there have, indeed, been many instances of black rappers depending on a white guy to operate the sound board (indeed, you could easily substitute "female" for "black" or "male" for "white"). But Kennedy fails to notice that Oakland has a long history of bucking that trend. Many of the top producers in local hip-hop - The Mekanix, Trackademicks, Paris, Tone Capone, etc. - are all non-white, as are many of the men behind the curtain in Kennedy's story. Two of his main sources, Mike Melero and Marty Araynado (aka Willie Maze) are neither white nor particularly privileged, so their very presence contradicts his thesis. Both have strong ties to local activist groups - Araynado even told Kennedy that his parents met at a Native American occupation of Alcatraz - and could hardly be described as "One Percent" nobility parlaying social capital to make art. The fact that Melero receives government food stamps and plans to default on his college loans might be a mark of personal imprudence, but it certainly doesn't imply privilege.

Another conspicuous hole in Kennedy's argument is the omission of local rap group Main Attrakionz, whose members are probably the most successful artists to be associated with Sick Sad World. Having already garnered press from the hipster music blogs of note, including Pitchfork, the group has clearly consolidated the "social capital" that Kennedy equates with privilege. Yet, Main Attrakionz' rise to fame has been entirely ground-up. The group's members, Squadda B. and Mondre M.A.N., developed their own network of producers and secured an Internet presence by releasing mixtapes on Bandcamp. But they also produced their own work using lo-fi methods, like cribbing samples from YouTube. It's the same DIY ethic embraced by most of the acts associated with Sick Sad World, and it impugns Kennedy's idea of Oakland hip-hop is a two-tiered system, wherein the non-white "artist" class is always beholden to white producers.

If anything, Sick Sad World shows that old delineations of class and privilege don't really apply to the micro-economy of Oakland hip-hop. Propelled by digital technology, interpersonal relationships, and old-fashioned cooperation, it's a much purer meritocracy than Kennedy presents. In fact, you could argue that in this case, technology is the great equalizer, since many of these artists produce their work on equipment that's as mundane and accessible as a simple cell phone. At one point Kennedy does acknowledge that old-fashioned ideas about power and access don't necessarily apply to the scene he's writing about: "There's a model here to counter a millennia-old art-economic class system," he writes, in what appears to be the article's nut graf. Then, in the very next paragraph, he contradicts himself. "There are also some familiar patterns at work," the author states, as though to recoup the art-economic class system he just dismissed as antiquated. He then foists it right back it on Sick Sad World.

Such equivocal language not only obfuscates Kennedy's larger point (which remains unclear), it also shows him casting about for an angle. And that's deeply problematic for a writer trying to make value judgments about his subjects, particularly with regard to race, class, and privilege. For most of the people Kennedy writes about - including Melero and Chippy Nanda - an art-school education was a useful luxury, not a prerequisite. The fact that Nanda dropped out of school to pursue her career should speak volumes.

Oddly, Kennedy ends his article with platitudes about "sustainability" which undermine his thesis - to say that the members of Sick Sad World are building their own DIY market directly negates his previous assertion that they're actually a microcosm of the mainstream economy, and that they replicate all of its inequities and power dynamics. Perhaps even he's realized that you can't just shoehorn zeitgeist-y terms into an article about a local rap scene, and find a way to make them seem accurate. The idea of "1 Percent" rappers might have seemed like a catchy concept; in reality, though, it's facile.