Great news for fans of flaky, all-butter pie crusts: After an extended hiatus, PieTisserie, the self-taught baking savant Jaynelle St. Jean’s pie shop, will return to business at a new brick-and-mortar location in Oakland, near Lake Merritt. The new PieTisserie will open — hopefully later this summer — at 1605 2nd Avenue, just a few doors down from the beer garden Portal, in a space previously occupied by a clothing boutique.

St. Jean told What the Fork that she has been looking for a new location ever since she closed her pie shop inside the Jack London neighborhood Mexican restaurant Nido last August, ending what had been an exciting store-within-a-store, permanent pop-up arrangement. She was on the verge of inking a deal on a space in Berkeley when the East Lake location fell into her lap — right around the corner from her house.

“This place has been underneath my nose for so long, it felt like it was meant to be,” St. Jean said.

The shop is small — roughly 400 square feet — and doesn’t have room for much more than a display counter. Fortunately, St. Jean has an off-site kitchen where can she prep and bake, and she’ll at least have enough space in her Oakland storefront for a refrigerator (so she can offer ice cream and fill cream pies to order) and a small convection oven, which she’ll use for warming the pies up.

“There’s nothing like warm pie, especially with ice cream,” St. Jean said. Given the shop’s proximity to Lake Merritt, she said she imagines that pie picnics might become a popular neighborhood activity. 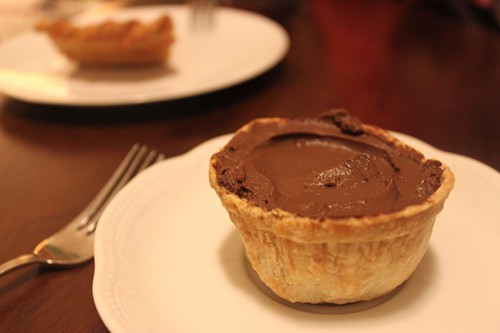 St. Jean plans to offer a selection of about eight pies at a time — a mix of popular standards and seasonal options that will be available whole, by the slice, and as individual-portion mini-pies. She’s used her time off to experiment with a handful of new recipes, including a version of sugar cream pie (what the French call tarte au sucre) and a kettle-corn pie, which will feature a corn-infused cream and salted caramel.

The shop will have some seating outside, plus a special table inside for bridal tastings. The only thing missing is the bright-red pie window — that quaint symbol of carefree country living — that has been St. Jean’s trademark ever since she started selling pies, at various pop-up events, from a little table set up to look like a window. Nothing draws a crowd like a hot pie cooling on the window sill. If budget permits, St. Jean said she might try to install one after all.

The new PieTisserie will be open in the evenings Wednesday through Friday, from 4 p.m. to 9 or 10 p.m., and then all day on weekends, which is when St. Jean will offer her savory breakfast mini-pies. Customers who order whole pies will be able to arrange pickup times outside of business hours.

Assuming inspections go off without too many hitches, PieTisserie will soon start taking online orders for weekend pickup. St. Jean hopes to officially open the brick-and-mortar shop in August, just in time for the tail end of the pitted-fruit season. Have you seen what the woman can do with ripe peaches? Thankfully, you shouldn’t have to wait too much longer to find out.