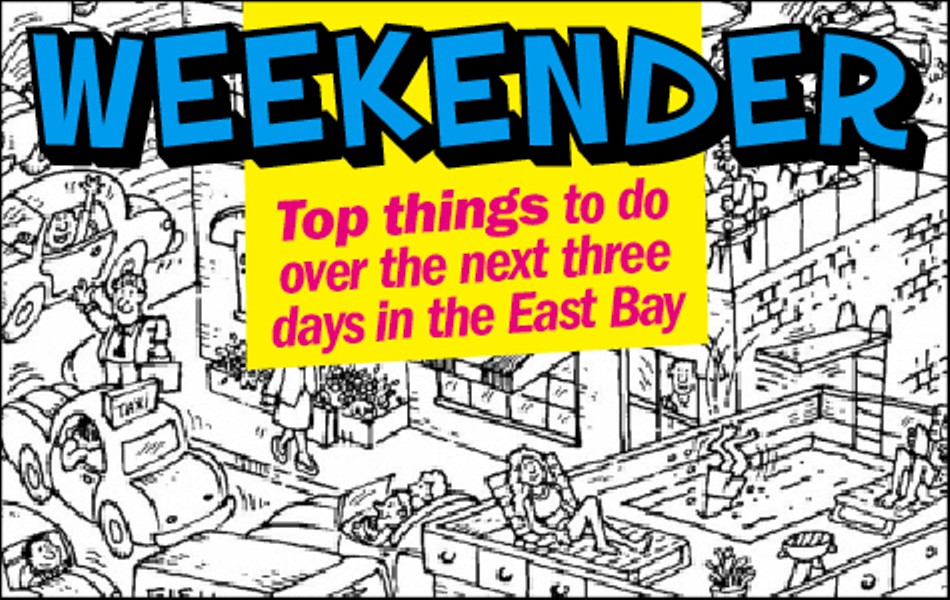 Ahoy, mateys. Here's what you're doing this weekend:

Eat Real Fest
The first Eat Real Festival, in 2009, sweated under the glare of an Oakland wave, and while there were fearsome lines and food shortages over its three days, it was a success. Some 70,000 people showed up, in no small part to check out the Bay Area's young street-food scene, then on its first legs. This year's fest is later than in previous years — September 23-25, in Jack London Square — but promises to be no less sweaty. Again, organizers — who inaugurated an LA version of Eat Real earlier this summer — are tweaking the format. They've invited fewer food trucks this year (sixty, compared to ninety in 2010), apparently to limit the mass of queued-up food seekers from choking the central promenade. Also new this year: a Craft Food Market, made up of nearly three dozen food artisans hawking a range of things, from coffee and jams to pasta and pickles. And — are you excited yet? — get ready for Eat Real's Jam Bar, which sounds like some sort of hip-hop poetry slam from the Nineties performed behind a counter, but I bet is going to be, well — a jam bar. Eat Real standbys are back again this year, though, including the butchery competition, various food demos, a multi-tap beer garden, music, and a literary festival. It's always been a bit hard to nail down Eat Real's exact rationale (apart from a being a sprawling, end-of-summer outdoor festival in Oakland, a food-focused bookend to Art & Soul). Neither purely a street-food festival nor a pickle-forward maker fair, Eat Real describes itself as "part state fair, street-food festival, and block party created to celebrate and showcase good food," according to a press release. Maybe that's rationale enough. Free, various times. See EatRealFest.com for details and full schedule. — John Birdsall

Rita Moreno: Life Without Makeup
To say that showbiz diva Rita Moreno is still spry at age 79 would be an egregious understatement. In My Life Without Makeup, she's able not only to trot around in a pair of stilettos, flirt with backup dancers Ray Garcia and Salvatore Vassallo, lead tap-dance numbers, change costumes, flaunt her glittery jewelry, and wax nostalgic about a love affair with Marlon Brando, but also to make just about anyone fall in love with her. And you don't have to know much about the star's biography to enjoy her new one-woman show, conceived by the Rep's artistic director-turned-playwright Tony Taccone, directed by David Galligan, and choreographed by Lee Martino. The ebullient Moreno tells her life story with the naturalness of an actor addressing a small crowd at a bar. She quips and laughs to attenuate the painful parts, regales us with juicy details about Brando (and other liaisons), and performs a couple famous numbers from West Side Story. It's billed as an autobiography without adornments, but the real Rita never needed makeup, anyway. Through Oct. 30 at Berkeley Repertory Theatre (2025 Addison St., Berkeley). $14.50-$73. 510-647-2949 or BerkeleyRep.org. — Rachel Swan

Berkeley and Oakland Hills Street Scramble
As it turns out, Rogaine is more than just a topical solution for the follicularly challenged. The term also refers to a part-athletic, part-navigational sport in which contestants are handed a map and tasked with locating a series of checkpoints by foot, typically in the wilderness but increasingly in urban settings. Rogaining, which was formalized as a legitimate sport in Australia in the 1970s, is essentially an endurance-based treasure hunt, the stuff of a competitive cartographer's dreams. On Saturday, September 24, the sport comes to the East Bay with the Berkeley and Oakland Hills Street Scramble, which challenges contestants to find more than two-dozen designated points of interest within a thirty-mile radius that encompasses Lake Temescal, upper Rockridge, Hiller Highlands, and the UC Berkeley campus. Whether on foot or by bicycle, individuals and teams of all ages will partake in either ninety-minute or three-hour forays throughout the two cities, embarking on paths of their own choosing and ticking off answers to idiosyncratic trivia questions about each successfully located landmark; the team with the most correct answers earns the win. The race starts at College Avenue Presbyterian Church (5951 College Ave., Oakland). 9 a.m.-1:30 p.m., $45-$85. Register at GetLostXX.com. — Cassie Harwood

Vanessa Diffenbaugh
The Language of Flowers, the debut novel by Vanessa Diffenbaugh, is a rich, substantial tearjerker as well as a reminder that society can write people off as easily as it forgot the Victorian language of flowers, which, once upon a time, gave lovers a way to communicate without saying a word. She'll be reading Friday, September 23, at noon at Rakestraw Books (522 Hartz Ave., Danville; 925-837-7337 or RakestrawBooks.com) and then at 7 p.m. at A Great Good Place for Books (6120 LaSalle Ave., Oakland; 510-339-8210 or GreatGoodPlace.indiebound.com); both events are free. — Stefanie Kalem

Get Buzzed: At The Kingfish, you can play Buck Hunter, drink absurdly cheap beer, and eat Ethiopian food, all at the same time. The world is truly a wonderful place.

Waste Some Time: Just watch it; it's only 49 seconds: