FUN FACT: Tomorrow is both Ice Cube's birthday AND World Juggling Day. This weekend is pretty much destined for greatness. Herewith, the top five things to do with your body/brain/time:

Bloomsday in Berkeley
Bloomsday in Dublin is an annual event that celebrates the life of author James Joyce on the day that the events of his epic novel Ulysses are set. It's traditionally filled with readings, dramatizations, and a retracing of Ulysses protagonist Leopold Bloom's route around Dublin —essentially a theatrical pub crawl in Edwardian attire. While attendees of the Bloomsday in Berkeley at the Garden Gate Creativity Center (2911 Claremont Ave., Berkeley) won't be able to walk the same streets as those in Joyce's tome, the event will include staged readings, a performance of the theater piece Portrait of the Artist's Mother by Dublin artist Marion McEvoy, and plenty of Joyce love. Sat., June 15, 5-10 p.m. and Sun., June 16, 2-6 p.m. $20-$25 — Azeen Ghorayshi 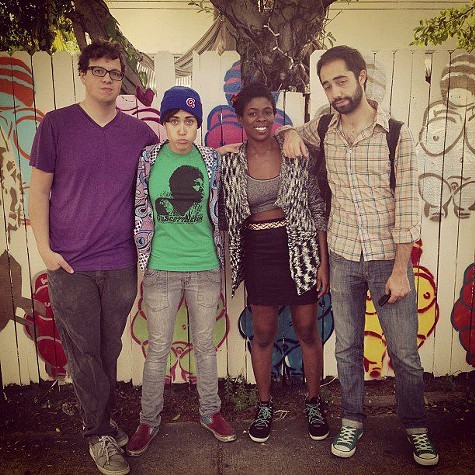 Bells Atlas
Oakland's self-described "Afro-indie soul" group Bells Atlas draws from a wide range of influences, including hip-hop, samba, R&B, indie rock, and pop, to craft its unique, lush sound. Nigerian-American lead vocalist Sandra Lawson-Ndu's smooth, sensual voice twinkles, lilts, and lifts, anchored by polished guitar stylings and steady drum beats. The band's music captivates and bewitches with a balance of jazz and pop beats, invoking good feelings and the urge to move. The band sounds even better live, which is why you should check out its upcoming show, which will celebrate the release of its debut self-titled album, at The New Parish (579 18th St., Oakland), along with seven-piece Bay Area band The Seshen, whose own dreamy vocals, mix of live and electronic instrumentation, and Afro-Caribbean vibes will serve as a perfect introduction. With DJ Treat-U-Nice. Fri., June 14, 9 p.m. $7, $10 — Madeleine Key

Freedom of Expression
Enrique Chagoya has been tripping up dominant narratives for decades now, wielding a sensibility for devious juxtaposition like few others can. His famous charcoal collision of Mickey Mouse and Ronald Reagan, depicted in the process of painting "Russkies and Cubans out of Central America" with a bucket of blood at mural scale, is impossible to un-see. This work is on display in Freedom of Expression, a survey of the artist's work now at Kala Gallery, but the exhibition is above all a marvelous opportunity to see the artist's more recent work, which pursues similar ideas in a curious variety of new forms. There are Warhol-style soup cans with recession-inspired flavors ("Bailout Bisque," "Ponzi Chowder") alongside a series of detailed, mock-informative codices, such as "Illegal Alien's Guide to the Concept of Relative Surplus Value," which unfold as pastiches of European, pre-Columbian, and pop-culture imagery. Also included is a series of etchings modeled after the grim, satirical prints of Francisco Goya but tailored to contemporary social issues. Through this characteristically clear-eyed reflection on his own practice, Chagoya draws an illuminating link between his own work and that of the Spanish master that goes considerably beyond their four shared letters. Freedom of Expression: The Work of Enrique Chagoya runs through July 6 at Kala Gallery (2990 San Pablo Ave., Berkeley). 510-841-7000 or Kala.org — Alex Bigman

Much Ado About Nothing
Joss Whedon’s adaptation of William Shakespeare’s most popular comedy is bright, witty, and bursting with ideas, so why shouldn’t it be satisfied with itself? The setting is a formidable house in contemporary times (filmed at Whedon’s Santa Monica home), where suited, limo-driven government types strut and fret while amusing themselves with the foibles of two pairs of would-be lovers: Claudio and Hero (Fran Kanz and Jillian Morgese) and the bickering Benedick (Alexis Denisof) and Beatrice (Amy Acker). B&B steal the show — Denisof particularly — with fine support by Nathan Fillion as Dogberry the comic constable, Clark Gregg as Leonato the host, and Sean Maher as the unscrupulous Don John. If we’re to believe the publicity, Whedon’s Much Ado is a by-product of the writer-director’s habit of getting his stock players — most of whom these are — to read Shakespeare for fun. Talk about conspicuous consumption. Playing at the Landmark Albany Twin and the Aquarius Theater. — Kelly Vance

Bloody Marys
HI IT’S BLOODY MARY SEASON*. Three very good versions I’ve had over the past week (don’t judge): 1.Doña Tomás’, which is pretty spicy in like a wonderfully sinus-clearing way, and also the perfect companion to their criminally underrated brunch; 2. The Forge’s, which is super-tomatoey and I thiiiink my favorite new Bloody discovery; and 3. Chop Bar’s, which has long been a go-to and gets high marks for a) the quantity and quality of its pickled vegetables, and b) the rim, which is celery salt, ie a total next-level Bloody move. YOU’RE WELCOME AND HAPPY DAY-DRINKING — Ellen Cushing