Take one look at this slideshow of frozen cities elsewhere in the US, and thank your lucky stars you live in a place that is basically an occasionally foggy paradise in comparison. After taking a moment to revel in this truth, GO OUTSIDE and consider doing these fun things with your weekend:

White Elephant Sale Preview
Those counting down the days until the biggest and best rummage sale of the year might want to spare themselves the headache and show up for the Preview Sale on Sunday, Jan. 27, at the event's 96,000-square-foot warehouse. Each year, attendees snag treasures ordinary and extraordinary, including jewelry, clothing, furniture, bric-a-brac, and, one year, a pony. Show up early to get first dibs on all the goods, avoid long lines, and enjoy an all-around painless experience that is guaranteed to make you a preview-sale convert. 10 a.m.-4 p.m., $15-20. 510-536-6800 or WhiteElephantSale.org — Azeen Ghorayshi 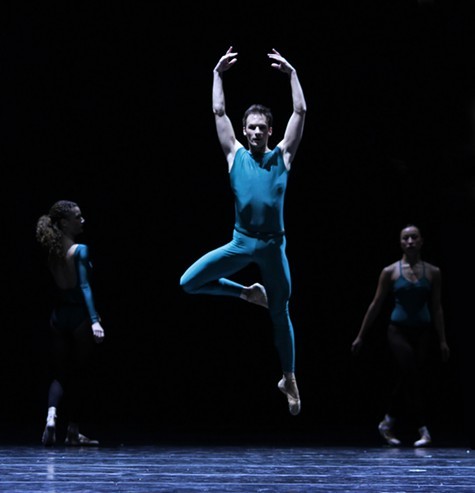 Joffrey Ballet
The first dance company to appear on television, first to tour the Soviet Union, and only to appear on the cover of Time, Chicago's Joffrey Ballet once wielded profound cultural significance. This American treasure is enjoying a contemporary renaissance under the artistic direction of former San Francisco Ballet principal Ashley Wheater. Making its first appearance since 2007, the Joffrey returns to Zellerbach Hall on Friday and Saturday, Jan. 26-27, with a program linking its heritage and its future: Edwaard Liang's Age of Innocence, an exploration of sexual repression set to music by Philip Glass and Thomas Newman; Christopher Wheeldon's After the Rain, with sensual duets on an evocative ArvoPärt score; and The Green Table, an antiwar masterpiece created by Kurt Jooss in 1932 and first presented in the US in 1967 by, you guessed it, the Joffrey. Sat. 8 p.m., Sun. 3 p.m.; $30-$92. 510-642-9988 or CalPerformances.org — Alison Peters

Troublemaker
Dan LeFranc's zany and colorful comedy Troublemaker, or The Freakin Kick-A Adventures of Bradley Boatright is a live-action comic book that follows the extraordinary hyped-up hijinks of a twelve-year-old rebel, a superhero wannabe, whose powers exist only in his fantasy world. Bradley and his pals are a Scooby Doo-type gang of DIY justice avengers, and this dynamic production weaves in and out of his overactive imagination (think Calvin and Hobbs.) LeFranc's awkward tween heroes and richy-rich villains also recall the amateur exploits of Austin Powers and Dr. Evil. In building a kids-only universe, LeFranc constructs an original and preposterous lexicon of slang, kid-cussin' and dressing downs that is the juicy center of this sweet (and a little sentimental) paean to the super-cool kid-power of awesome invention. Through February 3 at Berkeley Repertory Theatre. $29-$77. 510-647-2949 or BerkeleyRep.org — Erika Milvy

Nido
Nido can feel like a mishmash of literally every single Bay Area dining trend of the moment: furniture made from reclaimed materials, Mexican food reinterpreted through the prism of local ingredients, and the look — with co-tenant PieTisserie’s bright-red pie window greeting you as you walk in — of a permanent pop-up. Some of it feels a wee bit precious at times, but the important thing is that the food is tasty and lacking in pretension. Highlights include the Pollo Sobado (half of a succulent, spice-rubbed roast chicken); the Ollita de Pobre (a one-pot meal with a rotating meat selection); the thick, handmade tortillas; and the cool, refreshing chips adobadas. — Luke Tsai

Nels Cline
Guitarist Nels Cline does it all: rock 'n' roll as a member of Wilco, country with Willie Nelson, punk with bassist Mike Watt, arty noise with Thurston Moore of Sonic Youth, and improvisational free jazz with The Nels Cline Singers. That said, his four-night residency at new restaurant/venue Duende will likely get weird. Despite its name, there are no vocalists in the instrumental trio The Nels Cline Singers, which features Cline on guitar, Trevor Dunn on bass, and Scott Amendola on drums. The three compose their music onstage, drawing from progressive rock, experimental jazz, and even pop. The Nels Cline Singers will play a set, and then will be joined by a different guest each night in the second set. Wednesday-Saturday, Jan. 23-26. 9 p.m., $25. DuendeOakland.com — Whitney Phaneuf