Happy Friday! Here is two and a half minutes of dogs wearing boots:

ALSO, five fun activities for your brain and body to do this weekend!:

Brainwash Movie Festival
Brain feeling foggy? Clear your head by getting in your car, hopping on your bike, or simply putting on your walking shoes and heading to the Brainwash Movie Festival for some food-truck fare, live music, and a satiating selection of cinema. Billed as a "drive-in, bike-in, walk-in" festival, the eighteenth-annual event returns with four evenings of film screenings, including a short about how to survive a bear attack, a documentary chronicling two men's efforts to lug three Doggie Diner dog heads across the country, and more. Check website for full schedule. Festival runs at the Mandela Village Arts Center on Saturday, Sept. 15, and Friday through Sunday, Sept. 21-23. 8 p.m., $9-$12. 415-273-1545 or BrainwashM.com — Cassie McFadden

Christian Scott
Trumpeter Christian Scott took inspiration from Radiohead for his 2007 and 2008 albums, using smeary chords, guitar reverb, and eighth-note piano octaves to create a gloom-and-doom underpinning. That's certainly evident in his new album, too, although it's more steeped in influences from Scott's hometown of New Orleans. In fact, the whole first half of the two-disc set is riddled with atavistic references, drawn out in the shuffling rhythms, mournful melodies, and even the sultry mute of Scott's trumpet. The title, Christian aTundeAdjuah, has the trumpeter renaming himself to honor his West African ancestry. (Scott says he hasn't officially changed his name; rather, he's extended it.) He even wears a traditional Mardi Gras costume on the album jacket, complete with a feather headdress and beads. Scott comes from a lofty Crescent City dynasty — his uncle is saxophonist Donald Harrison, and he's a protégé of Terence Blanchard — and he's always tried to honor that, even when his music had a wandering palette. Now the genuflections are more direct and bold. "Danziger," a song named for the bridge where New Orleans police shot and killed two people and wounded four others, six days after Hurricane Katrina, is doleful and insightful. Scott will perform with opener Jazz Mafia at The New Parish on Sunday, Sept. 16. 8 p.m., $20. TheNewParish.com — Rachel Swan 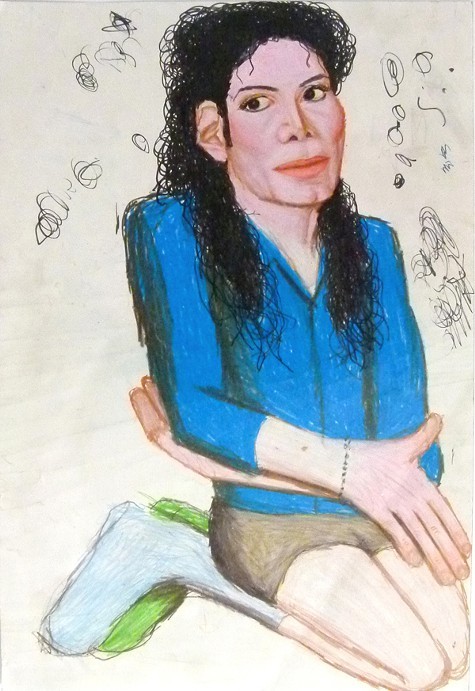 Fanatic
Many of the artists at Creative Growth tend toward devotion. Whether toward pop music heros, bygone soap opera stars, or personal cassette tape collections, these attitudes, often bordering on obsessive (sometimes not so subtly), permeate the artists' practices. Fanatic rounds up the most successful drawings, paintings, and sculptures of this type. In these works, the charm, swagger, and aura of the subject comes through loud and clear, if unconventionally: Aurie Ramirez transforms rock gods KISS into a gang of busty females; Terri Bowden presents several portraits of Michael Jackson, his hands enlarged in various positions of outreach and self-embrace. In other works, fanaticism inheres simply in the presence of a crowd, or the repetition of the artist's signature. Clearly, this is one theme to which the gallery could endlessly return. Fanatic runs through September 27 at Creative Growth Gallery. 510-836-2340 or CreativeGrowth.org — Alex Bigman

Chinglish
Billed as a comedy about the perils of cross-culture communication, David Henry Hwang's Chinglish, now receiving its West Coast premiere at Berkeley Rep, is actually a salty, political play with nods to the Enron scandal and the current Bo Xilai imbroglio. At its core, though, it's a sweet, star-crossed love story involving a guileless American businessman (Alex Moggridge) and a svelte, canny vice-minister (Michelle Krusiec). David Korins´ sets, built on rotating turntables, conjure images of a gradually modernizing but somewhat staid and traditional China, where politicians are still adjusting to their new position on the axis of global power. The characters consort in a series of intricately designed, but ultimately prosaic environments that fit together like puzzle pieces. Hwang, who also penned M. Butterfly, has created a play that´s at once a fable and a social commentary — a series of hilarious inter-titles bear out the theme as characters attempt to parlay in Mandarin and English. Leigh Silverman directs. Through October 7 at Berkeley Repertory Theatre. $14.50-$99. 510-647-2972 or BerkeleyRep.org — Rachel Swan

Weekend
Playing coy is apparently the new favored technique for increasing hipster street cred. Take lo-fi distortion mongers Weekend, an Oakland trio that's moving to Brooklyn but doesn't really want you to know that, according to its publicist. Also, it's playing one final Bay Area show, which it also doesn't really want you to know about. And it has new music, which may or may not be released. Are you excited yet? Local bands Deafheaven (skinny-jeaned black metal) and Wild Moth (fuzzy, noisy post-punk), on the other hand, which both open for Weekend on Saturday, Sept. 15, at The Uptown, appear to be staying in the Bay Area and would probably like their show to be advertised. So don't miss this strong local billing — just pretend not to notice Weekend. 8:30 p.m., $12. UptownNightclub.com — Kathleen Richards