Happy 4/20! Happy Carmen Electra's birthday! Happy first truly warm weekend in what feels like whatever! Here's how you're spending these glorious 72 hours:

Youth Speaks Poetry Slam
Youth speaks — especially when the 16th Annual Teen Poetry Slam's 500 semifinalists descend on the East Bay in a tournament-style competition. Event organizer and San Francisco nonprofit Youth Speaks, which launched the country's first teen poetry slam in 1997, is dedicated to creating safe spaces for young folks to find, develop, and use their voices to effect positive change. Poets perform for about three minutes and are judged on quality of writing, poem content, and performance. All semifinals are free and open to the public. At The New Parish (579 18th St., Oakland) on Friday, Apr. 20, at 6 p.m., and The David Brower Center (2150 Allston Way, Berkeley) on Saturday, Apr. 21, at 7 p.m. YouthSpeaks.org — Alison Peters 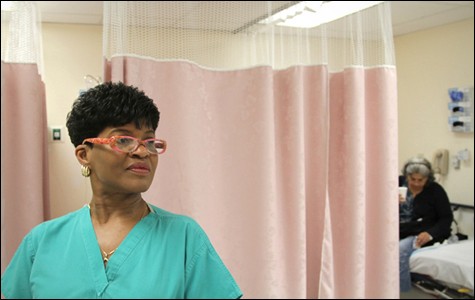 The Waiting Room
Told in a fly-on-the-wall cinema-verité style, this completely absorbing doc — playing the Pacific Film Archive (2575 Bancroft Way, Berkeley) on Saturday, April 21 as part of the San Francisco International Film Festival — lets us observe what takes place on a regular day inside the emergency room reception area at Oakland's Highland Hospital: everyone from nudniks trying to cop a free Tylenol to teenage gunshot victims dying in the midst of triage. No insurance means limited access, and limited access means long, long waits, even for the hapless guy with testicular cancer or the little girl with infected tonsils, strep throat, and a very worried dad. The hospital is filled to the max, and by regulation no new patient can be admitted until someone leaves. There are enough doctors, nurses, medical assistants, and social workers to fill a dozen daytime dramas, and the star among them is the admitting nurse. Opines one doctor: "The ER is not the place to manage someone's overall health." Another bit of "dialogue" no screenwriter could hope to make up: "We keep people overnight, just as much for their social conditions as for their medical conditions." Before you see any film in this year's festival, be sure to run out and see this. 3:50 p.m., $11-$13. BAMPFA.Berkeley.edu — Kelly Vance

The City is Ours
As of Friday morning, this local-love megashow still didn't have a venue, not that that should necessarily stop you from canceling your plans for Saturday, April 21 and seeking out whichever warehouse/park/freeway overpass at which it finally finds a home. On the absurdly deep bill: Hongry Hussein, Zach G, 1 AM Love, Pessamist, Bemie, Antwon — whose amazing "Helicopter" should be your weekend anthem regardless — Twin Steps, Friendzone, Freebox, Powwow, Left Coast Flock, Yole Boys, and many more, plus DJ sets from Miggy Stardust, NETO 187, Femdom, and Little Sister WTF. 6 p.m., free. Check Hoodstock's Twitter for updates. — Ellen Cushing

Harald Oimoen and Brian Lew: "Murder in the Front Row"
Before Metallica became the mega-selling international band it is today, its members were a bunch of scraggly-haired heshers lighting up the local thrash metal scene at venues like Ruthie's Inn in Berkeley. During that time, bands like Metallica, Slayer, Exodus, Testament, Death Angel, and Possessed established the Bay Area as an epicenter of a raw, punk-influenced sound that was the antithesis to the popular hair metal trend of the day. Capturing all of this on film were Harald Oimoen and Brian Lew, who weren't just photographers but were also deeply ingrained in the scene: As friends with many of the bands, Oimoen and Lew had unprecedented access, the results of which can be seen in a new 272-page book called Murder in the Front Row: Shots from the Bay Area Thrash Metal Epicenter. Oiemoen and Lew will be on hand (plus Metal Mania fanzine creator Ron Quintana, who'll be DJing) at a special book signing on Sunday, Apr. 22, at Issues (20 Glen Ave., Oakland). A must-attend event for any thrash fan. 5 p.m., free. IssuesShop.com — Kathleen Richards

Danny Brown
He's from Detroit, but if there's one place he thinks of as his home away from home, it's the Bay. The son of a house DJ, Brown was raised on East Bay rap staples such as E-40 and Spice 1. His originality as an emcee comes partially from his voice (unusually shrill, almost cracking on every verse), his personality (via his lyrics: humorous, irreverent, sex-obsessed), and his outlandish look. Brown wears his hair huge in the middle, completely shaved on the sides, and usually pulled to one side like a huge, floppy mohawk. He lost his front teeth as a child, when he was hit by a car in a KFC parking lot, and never bothered to have them replaced. Altogether, this makes Brown utterly fascinating, a fresh glitch in the rap world. He's here to support Childish Gambino at a three-thousand-seat-capacity theater, but 4/20 is your chance to see him for free: At Lower Sproul Plaza, UC Berkeley, on Friday, Apr. 20. 5 p.m., free. www.ocf.berkeley.edu/~superb — Will Butler