Doctor in Spite of Himself at Berkeley Rep: camptastic goodness

SAFE
Last November, in a much-deserved profile in this paper, esteemed music editor Rachel Swan described SAFE as, among other things, "arresting," "widely admired," and "incorrigibly handsome" — all true, by the way. In the time since then, the local garage duo, comprised of singer Chris Edley and guitarist Jesse Hadden, has played seemingly every party, bar, and warehouse it could; opened for buzzband extraordinaire and fellow capitalization fan YACHT; had its entire sophomore album get lost in what Edley describes as a "small computer fire"; started all over and made significant headway on the record, set to be released on HimanshuSuri'sGreedhead label; been featured on the front page of the TheFader.com; become an it band among a certain swath of Francophone Belgian music bloggers; and, last but not least, finally joined Twitter. If the pattern holds, the band's show on Saturday, March 3 at Disco Volante (347 14th St. Oakland) may be your last chance to see Hadden and Edley before they win a Grammy and/or climb Mount Everest. With Metal Mother and Mortar and Pestle; 9 p.m., $5. DiscoVolanteOakland.com. — Ellen Cushing 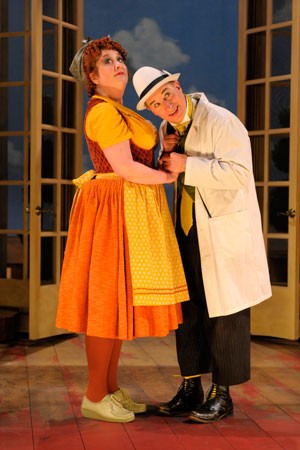 A Doctor in Spite of Himself
Molière's fascination with moral and ethical themes might explain the longevity of his plays. Or perhaps it's his ability to communicate something essential about human relationships. Or, in the case of Le Médecin malgré lui (The Doctor in Spite of Himself), it might just be a trick of fortune that 21st-century medicine suffers some of the same quandaries that plagued doctors in 17th-century France. We're not attributing illness to the four humors anymore, but there's certainly a leap of faith required in just about any diagnosis. At any rate, Doctor is endlessly transmutable and perfectly translatable to a modern audience. Berkeley Rep proved as much in its new rendition, which borrows commedia dell'arte aesthetics but makes them campy — two lead characters, the woodsman Sganarelle (played by co-writer Steven Epp) and his wife Martine (Justine Williams) have a Punch-and-Judy-style spat in the opening scene, which takes place partly in a puppet theater. Rife with dick jokes and larded with pop culture references, the play is a fabulously extravagant sendup. It's fitting that director Christopher Bayes is also a master clown. Through March 25 at Berkeley Rep (2025 Addison St., Berkeley). $14.50-$73. BerkeleyRep.org. — Cassie Harwood

Schoolboy Q
If you've got faith in the future of hip-hop, the only thing that could be better right now than seeing Schoolboy Q would be seeing Schoolboy Q in the company of Kendrick Lamar, Ab-Soul, or Jay Rock. Who's to say if that will happen on Sunday; but either way, Q is maybe the most exciting member of the aforementioned Black Hippy crew, and an appearance from any one of the LA-based rap group in addition would be a treat. Habits & Contradictions came out at the beginning of the year and, despite all the albums that have come out since, it still sits securely at the top of my playlist. Q's ragged bark recalls Kanye West at his angriest, his cocky diatribes are reminiscent of Dre's Chronic 2001 at its most dominant. But he's also clearly a loyal soldier, dedicated above all to furthering both his own career and those of his South Central compatriots: At The New Parish (579 18th St., Oakland) on Sunday, Mar. 4 at 9 p.m., $20, TheNewParish.com. — Will Butler

Follies of the Digital Arcade
Step right up, connoisseurs of anachronisms! Christina Corfield examines late 19th-century America with a playful irony that may be dangerous to "infants and individuals of feeble constitution." The harnessing of electricity and the selling of quack nostrums and pseudo-scientific nonsense are the subjects of a video, The Body Electric, with actors mouthing antiquated patter ("Ain't she a peach!") amid slapdash painted props; bombastic broadsheets ("Vaporous Subjugation"); piquant posters in the style of Paris ("Bal Electrique," "Lucille, the White City, "Miss California Lights Up the Nite"); and cautionary paintings depicting threats to normalcy with some of the mordant relish of Edward Gorey. Witness young girls hypnotizing stage magicians or levitating; electrical goblins in mirrors and nude visions in sunbeams; women becoming manly and men becoming womanly, on ether; and children, enslaved to the demon wireless. It can't happen here, you say? Follies of the Digital Arcade runs through March 17 at Johansson Projects (2300 Telegraph Ave., Oakland). 510-444-9140 or JohanssonProjects.com. — DeWitt Cheng