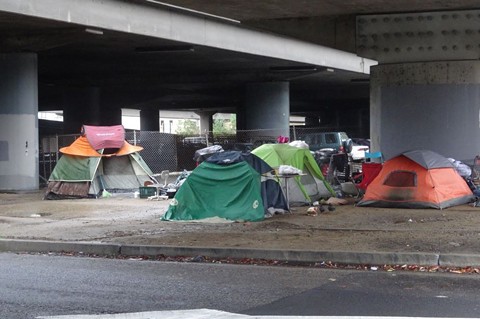 1. Gov. Gavin Newsom was in Oakland Tuesday to announce the formation of a homeless task force, along with $1 billion in funding to help solve the problem, the Associated Press reports. Newsom named Sacramento Mayor Darrell Steinberg and Los Angeles County Supervisor Mark Ridley-Thomas as co-chairs of the task force.

3. Alameda resident Greg Barron believes the six-story edifice on his property is art. The city says it's a building that requires proper permits, SFGate reports. In the meantime, the object, which was featured at Burning Man, has racked up more than $20,000 in fines from the city.

4. "The Oakland City Council passed a resolution Tuesday calling for an independent audit of the Alameda County Sheriff’s Office budget after a number of inmate deaths at the county jail, complaints by pregnant inmates and revelations that deputies had illegally recorded juveniles," the San Francisco Chronicle reports. $$

5. California sued the Trump administration for the 50th time Tuesday. This time to prevent it from canceling nearly $1 billion in federal funding awarded in 2010 for the state's high-speed rail project, Reuters reports.

7. Speaking at a pro-choice rally in Washington, D.C., East Bay Rep. Eric Swalwell said the decision to have children belonged to his wife, the Washington Free Beacon reports. In recent weeks, Swalwell's presidential stump speeches have deferred to women. For example, he pledges to choose a female running mate, if he wins the Democratic presidential nomination.