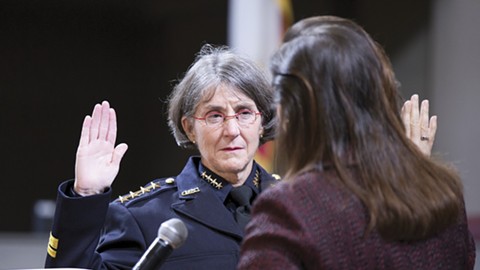 News you don't want to miss for May 6:

1. Former Oakland Chief of Police Anne Kirkpatrick filed a lawsuit alleging the Oakland Police Commission, which fired her earlier this year, did so as retaliation for Kirkpatrick blowing the whistle on their own wrongdoing, including seeking personal favors, the San Francisco Chronicle reports. $$

2. A new study is predicting a huge increase in traffic congestion in the Bay Area after the shelter in place orders are relaxed, SFGate reports. Understandably, people who typically use public transportation for commuting to work will be cautious about getting back on the bus and BART trains.

3. U.C. Berkeley Chancellor Carol Christ said the fall semester will likely include a hybrid of in-person and online classes, and without any tuition refunds, KPIX reports.

4. The list of Bay Area restaurants and coffee shops permanently closing is growing, SFEater reports. In the East Bay, they include, Momo & Curry, La Guerrera’s Kitchen, Benchmark Oakland, Tertulia Coffee, Bica Coffeehouse, and Gaylord's on Piedmont Avenue, among others. In Berkeley, Lalime's and the Tartine Bakery in the Graduate Hotel has closed for good.

5. Here's more bad news for revenue side of the state's financial ledger: The state could lose $1.3 billion in gas tax revenues due to the shelter in place, according to a new study, the San Francisco Chronicle reports. $$