1. A fake Obamacare website created by California Republicans at taxpayer expense is sparking outrage among liberal groups, SF Gate reports. The site, put together by GOP Assemblymembers and paid for with public funds, uses a similar web address to Covered California — the state’s Obamacare exchange — in an obvious attempt to mislead people and discourage them from signing up for Obamacare. The fake site focuses exclusively on the perceived drawbacks of the Affordable Care Act. 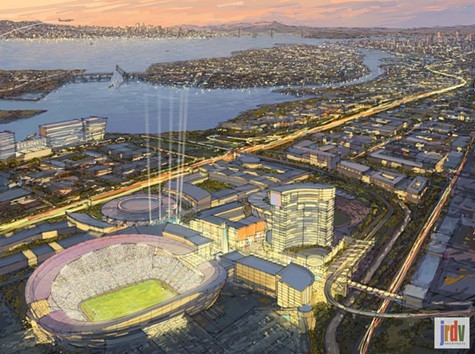 2. Alameda County Supervisors expressed skepticism of the City of Oakland’s plan to build a large, privately financed sports and retail complex known as Coliseum City on the existing Oakland Coliseum property, the Trib reports. Supervisors noted that the city and county, which co-own the Coliseum property, still owes more than $200 million from renovations done for the Oakland Raiders and the Golden State Warriors on the Coliseum and next-door Arena.

3. The Richmond City Council approved a crackdown on e-cigarettes, banning them in any enclosed space in the city, including fenced public parks — despite the fact that there’s no evidence that e-cigs pose dangers to bystanders. The CoCo Times reports that the council majority was concerned that e-cigs may prove to be a gateway to cigarette smoking. However, recent research shows that e-cigs may help smokers quit the habit.

4. An Oakland man has sued an off-duty Concord police officer in a road rage incident, contending that the cop cut him off on the Highway 24 and then broke his arm after the two stopped on the freeway, the Chron reports.

5. And fast-food workers from around the country are planning another mass walkout tomorrow in more than one hundred cities to protest low-wages, the Washington Post$ reports.