1. The tentative deal between BART management and two of its unions calls for a 15.38 percent salary increase for workers over four years, which works out to about 3.8 percent annually. The Chron reports that employees must also start paying into their pension plans and will pay 4 percent in the final year of the deal. The contract also calls for higher monthly payments for health care. The unions also gave up some existing work rules while others will go to arbitration. At least one BART board member — Zakhary Mallett — said he will vote against the deal. 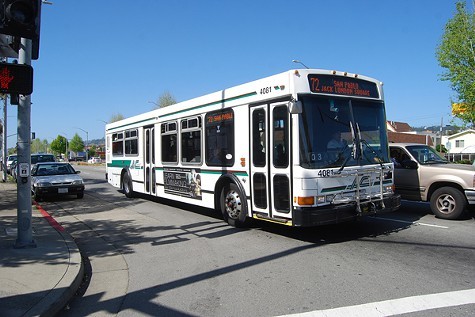 2. Governor Jerry Brown has called for a sixty-day cooling off period in the labor dispute at AC Transit, the CoCo Times reports. Bus drivers said earlier this week they are concerned about safety issues and are upset about limited meal and bathroom breaks.

3. Some independent truckers at the Port of Oakland staged their second day of protests yesterday. The Chron reports that the truckers are upset in part about state pollution rules that require truckers to dramatically reduce toxic emissions by January 1. The truckers say they need more financial help to retrofit their rigs, but port officials noted that truckers have already received $38 million in grants for the retrofits and that most truckers are already in compliance with the pollution regulations.

4. After the fatal BART crash on Saturday, transit management sent a chaplain and grief counselor to the wrong house — the home of an employee who had not been killed, the Chron reports.

5. And a man who was angry about the BART strike is facing felony criminal charges after he hurled a hammer at striking workers at the Daly City station on Monday, the San Mateo County Times reports.