1. Your sunscreen not only may not work, but it’s probably toxic, too. That’s according to the Oakland-based Environmental Working Group, which is out with a new comprehensive report analyzing sunscreens, the Chron reports. Lax governmental standards and nonexistent regulation are allowing sunscreen manufacturers to make bogus claims about the efficacy of their products. And many sunscreens contain chemicals that are linked to skin tumors, lesions, and hormone disruption. Among the sunscreens to avoid: Coppertone’s Water Babies SPF 70; it made the report’s Hall of Shame: 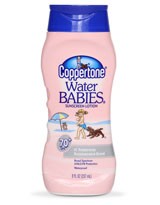 “Coppertone advises users of this baby product to apply ‘liberally.’ But scientists, who have researched its key sunscreen chemical, oxybenzone, warn against using it over large surfaces of skin and over many hours. These warnings are particularly strong for young children who don’t eliminate toxic chemicals from their bodies as readily as adults and who have more skin relative to their body weight than adults.”

2. Google is bullish not only on massive solar farms but on big wind farms, too. The Internet giant is investing $55 million to help build a giant wind farm in the Tehachapi Mountains in Southern California, the LA Times reports. Google has now pumped at least $400 million in alternative energy projects, including an Oregon wind farm and a major solar installation in the Mojave being built by Oakland’s BrightSource Energy.

3. If the state and federal government adopt stricter fuel-economy standards for cars, as expected, it will create at least 236,000 new jobs over the next fourteen years, the SacBee reports, citing a new study by the green-tech group Next 10. New fuel efficiency standards also could slash green-house gas emissions by 19 percent. Nonetheless, expect Republicans to claim that new fuel standards to be a "job killer."

4. This year’s exceptionally bad allergy season may be the result of climate change. California Watch reports that a new study shows that allergies are on the rise, and the likely cause is warmer temperatures.

5. And finally, we’re linking to this because it’s just so bizarre when you think about it. Imagine for a moment the Republican reaction if a foreign leader had come to the United States, dissed President Bush on national TV, and then got dozens of standing ovations from Democrats in Congress as he repudiated official US foreign policy. The GOP, at minimum, would have called Democrats “traitors,” right? And yet, in the past few days, that’s precisely what Israeli Prime Minister Benjamin Netanyahu did. The only difference was that he bashed President Obama and got standing ovations from Republicans (and some Democrats, too). And yet the whole bizarre episode was all treated as if it were perfectly okay, normal in fact.