1. Oakland police and Occupy Oakland protesters clashed last night until about 1 a.m. today, after cops repeatedly sprayed demonstrators with tear gas last night in order to break up the crowd, the Chron reports. 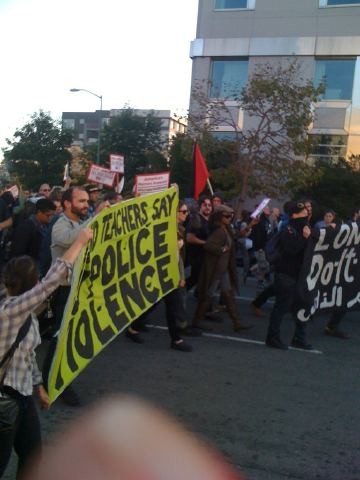 Hundreds of protesters, many of whom had been forcibly removed from the Occupy Oakland encampment in front of City Hall early Tuesday, returned in the afternoon, after marching through city streets, the Trib reports. The protesters then clashed with police for several hours, but never regained control of Frank Ogawa plaza, where their encampment had been.

2. An East Bay police officer will plead guilty to stealing cash and drugs and will likely testify against other cops caught up in the scandal, the Chron reports. San Ramon police officer Louis Lombardi was officially charged Tuesday in federal court in Oakland on multiple felony counts that he stole cash, jewelry, pot, and methamphetamine during raids and was in possession of a stolen firearm. Lombardi is expected to cooperate with prosecutors in the federal case against Norman Wielsch, a former state drug agent, and Christopher Butler, a former Antioch police officer.

3. The Metropolitan Transportation Commission is expected to ask a state panel on Thursday to build 290 miles of toll lanes in the Bay Area at a cost of up to $6.8 billion, the Coco Times reports. MTC believes the move will relieve traffic congestion, but environmentalists and transportation activists contend that toll lanes could entice more people into their cars and that the huge amount of money to be spent should be used for mass transit systems that help low-income commuters.

4. State Attorney General Kamala Harris is suing plastic bottle manufacturers who claim that their products can “biodegrade,” the Mercury News reports. The lawsuit seeks to remove from supermarket shelves tens of thousands of bottles of Aquamantra and Balance Water. Harris contends that these plastic bottles don’t decompose naturally and that they contaminate other types of recycled plastic.

5. The City of Alameda is turning over the operation of its animal shelter to a nonprofit staffed with volunteers because of the city’s budget crisis, the Chron reports.

6. And Andronico’s likely will be sold this week to Renovo Capital in a move that will save the East Bay supermarket chain from going out of business, the Trib reports. However, Andronico’s plans to close one of its Berkeley stores — on University Avenue — in a cost-cutting move.