Wear Your Hatred for Monsanto on Your Sleeve

With the Grease Diner T-Shirt contest 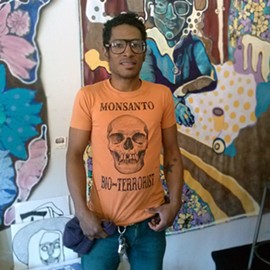 The March Against Monsanto is a global protest on May 23rd targeting the controversial practices of the pesticide- and seed-producing giant. In Oakland, protesters will meet at 11:30 a.m. at Frank Ogawa Plaza and march to the Lake Merritt Pergola for a rally at 1 p.m. "Monsanto is thinking about profit and control, missing the point that they are destroying their world too - which is greater than any amount of money," Cassagnol and Shapiro said in an e-mail.

In addition to making a donation for each Bio-Terrorist t-shirt sold, The Grease Diner is having a March Against Monsanto t-shirt design contest: submit your best single-color design by April 30 for a chance to see it in organic cotton. If your design doesn't win, you can rock still your Monsanto-hating vision at the march – just DIY it. The Grease Diner will waive their $15 intro studio use fee for anyone screen printing for the march.