We Have Met the Hostiles, and They Are Us 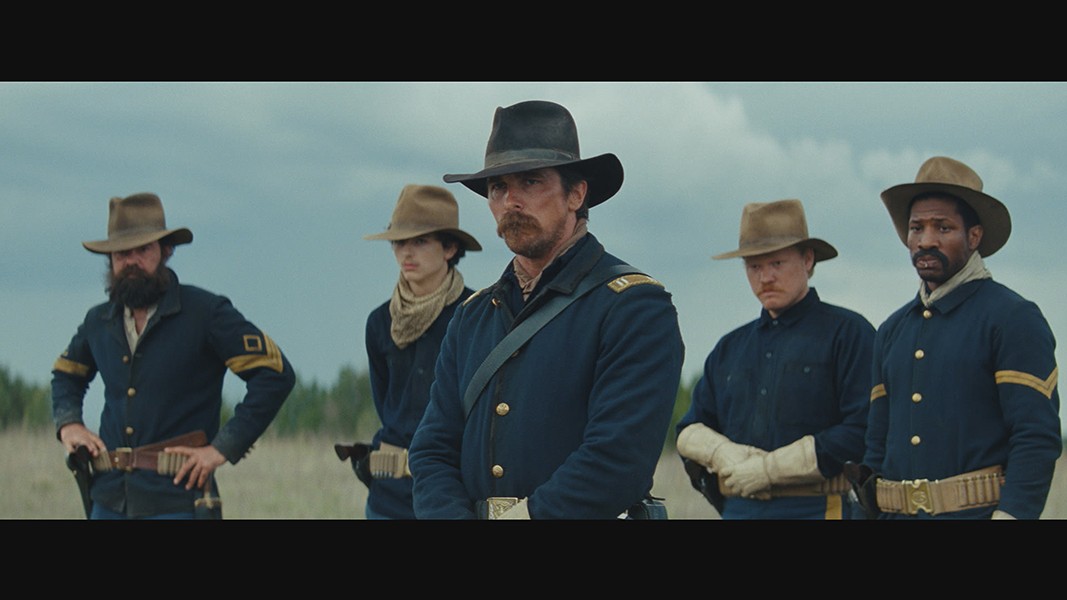 Frankly, Hostiles is not the finest Western of the past 10 years. But that's not to say it is unimportant or trivial. Instead, director Scott Cooper's vision of the late writer Donald E. Stewart's original manuscript takes us back to the days when that hardiest of American movie genres was a constant presence on the cultural landscape, an everyday experience. A time when everything that ever happened in this country could be explained, metaphorically, using characters on horseback. It's a folk fable in the common parlance, a modest legend told in the vernacular.

In the story of a war-weary U.S. Army cavalry officer (Christian Bale), a dying Native-American war chief (Wes Studi), and an emotionally ravaged female settler (Rosamund Pike), the rather archly titled Hostiles aims to show us a landscape not so terribly different from today's — how it felt, what it sounded like, what people did compared to what they said. It's an ambitious project lined out in short, decisive strokes of taciturn dialogue and sudden violence.

Capt. Joe Blocker of Fort Berringer, N.M. is nearing the end of his career fighting native tribes on the frontier, circa 1892. By his own somber reckoning he has seen far too many of his men die horrible deaths. As he sits drinking whiskey with his comrade, Sgt. Tommy Metz (Rory Cochrane, in a remarkable performance), we learn that they have taken part in some of the ghastliest massacres in U.S. history, and now their souls are restless. We could say the same for the once-fearsome Cheyenne Chief Yellow Hawk (Wes Studi), now a caged POW with terminal cancer. Blocker is ordered to take Yellow Hawk and his family back to their tribal lands in Montana, through territory inhabited by bloodthirsty natives and whites. A fairly typical Western scenario, one that depends entirely on characterization to get us there. Hostiles does not let us down.

For relaxation, Blocker reads Julius Caesar in the original Latin. His telltale nervous tic is to carefully pat down his hair. The tormented Sergeant Tommy, a lifelong soldier haunted by his deeds, seems headed for oblivion. Yellow Hawk and Blocker hate each other as warriors, yet understand the other man's motivations. The natives' home is being stolen from them, but they will not give up without a fight. And the army will punish all transgressors with extreme prejudice. Into this fierce geometry is plunged Mrs. Rosalie Quaid (Pike), lone survivor of a grisly Comanche raid, who loses and then slowly regains her emotional bearings.

Also on the trail are the chief's son (Adam Beach); a hymn-singing corporal (Jonathan Majors); a bewildered young lieutenant (Jesse Plemons); a condemned military prisoner (Ben Foster, devious as usual); a pair of fed-up army colonels (Peter Mullan, Stephen Lang); and an obvious figure of ridicule, the pompous, sanctimonious reporter from Harper's Weekly (Bill Camp). They're all tied together by the D.H. Lawrence epigram that opens the film: "The essential American soul is hard, isolate, stoic, and a killer. It has never yet melted."

Hostiles belongs to the realistic school of screen Westerns in which the men have beards, everyone needs a bath, and the very first impulse on meeting a stranger in open country is to try to kill him. John Ford romanticism has no place in Cooper's West. The life Blocker is easing himself out of has more in common with the lonely purgatories of The Homesman or the Coen Brothers' True Grit. Bale's rugged, ruined face and Studi's dignified contempt suit the story ideally, as do the Pike character's transformations from nurturer to victim to townswoman with a buried past.

Filmmaker Cooper, typically drawn to dangerous Americana (Crazy Heart, Black Mass), is satisfied to keep his Western well within the tried-and-true boundaries of cavalry-natives-innocent victims, with low-key but persistent brutality as a constant reminder of where we are. The lives of Blocker, Yellow Hawk, and Mrs. Quaid are lived in the backwaters of this country's age of Manifest Destiny, but their ordeals still have the ring of absolute truth, 125 years later. When Blocker and his military colleagues refer ruefully to the way it is "out here," they're talking about the place we recognize as home. That realization helps lift up Hostiles from a routine violent genre piece to op-ed status. The home of the brave has rarely seemed so desperate.