This may be the year the Berkeley Afropop-influenced band breaks through. 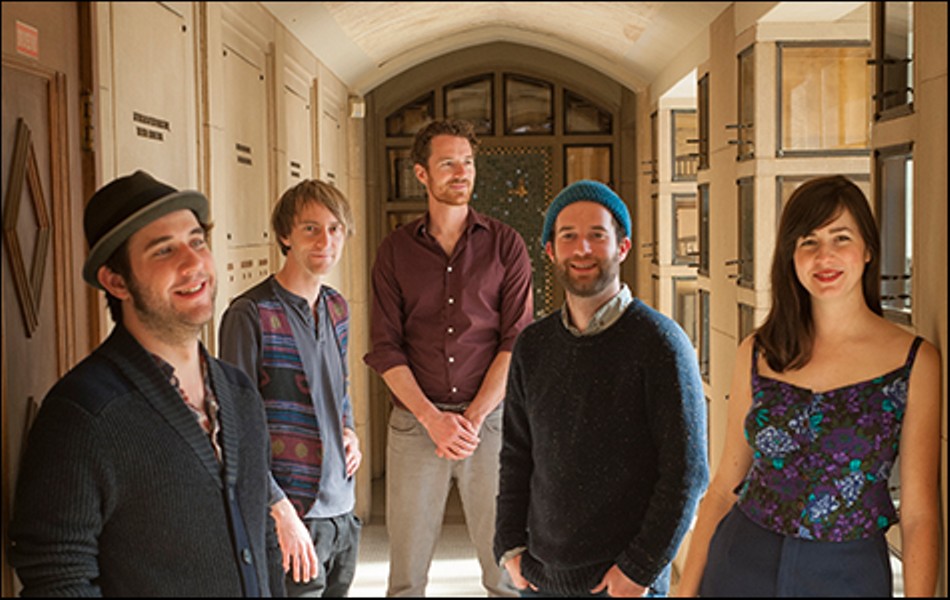 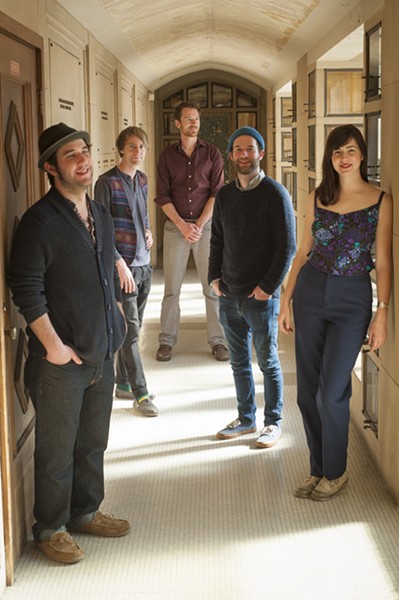 Waterstrider embarks on a national tour this week.

Since forming in the fabled bowels of the UC Berkeley co-op Cloyne Court Hotel in 2009, Waterstrider has wended its way through various incarnations, changing sounds, members, and its vision of its future. But 2014 just may be Waterstrider's year. Momentum has been building since it released a cover of Little Dragon's "Twice" in December, garnering more than 200,000 plays on YouTube and Soundcloud. And the band is soon to embark on a month-long national tour opening for indie-rock group Gardens & Villa, and plans to release its first full-length album later this year.

Nate Salman, Waterstrider's lead singer and chief songwriter, said he's been sitting on a batch of new songs for years. He described them as introspective, with lyrics referencing post-apocalyptic visions and the Greek muse of poetry, Calliope. "It has a cohesive sound and themes," he said. "I feel very sure of this album. It's been a long time in the making."

It all began in the fall of 2009, when Salman — then a music major at UC Berkeley — was living at Cloyne Court. He and four other residents — Alex Siegel, Clayton Ernst, Nick Scozzaro, and Brijean Murphy — began playing music together. "We would just jam in the basement and play house party shows," said Salman.

But then, inspired by a friend's Afrobeat band, Wetlands, Salman became more serious about his intentions. He recruited more members to create an eight-piece band that combined a Fela Kuti-inspired sound with the sprawling free-form of a jamband. Waterstrider was born.

"My friend, who's the lead singer of Wetlands, he and his girlfriend started calling me Waterstrider as a weird nickname, like it was my spirit animal," Salman said. "I like it because it's a natural thing, an insect, but also sort of supernatural. Most things can't walk on water."

But the eight-piece setup didn't last long. The next incarnation of Waterstrider emerged unintentionally as a four-piece punk band. "It was loud and driving and fast. The first couple shows we played I'd say it was four times as fast as it is now," Salman recalled, laughing.

One of Waterstrider's first big moments came in the fall of 2010, when it played a large party at Cloyne Court with Gardens & Villa and Wetlands. Salman said the history of the house carries with it a kind of musical mythos; Rilo Kiley, Elliott Smith, and No Doubt are rumored to have performed in its storied basement.

Soon after, in the spring of 2011, Waterstrider found its current sound — a deft medley of indie rock and Afropop coupled with Salman's ethereal, Paul Simon-like warbling. A five-piece version of Waterstrider — with Salman, Alex Siegel, Clayton Ernst, Brijean Murphy, Nick Scozzaro, and Sean Suess, who added flute, saxophone, synths, and back-up vocals to the mix — released a four-track EP, Constellation, in August 2011. The EP was self-recorded in Salman's bedroom and self-released on Bandcamp. The release of Constellation attracted the attention of Walker Johnson, a close friend of Salman's older brother. "Walker told me he was really into Constellation and wanted to join the band, even if he just played one glockenspiel note! And I knew he was a really good drummer," said Salman.

With Johnson in the mix, Waterstrider regrouped and released its second EP, Wind-Fed Fire, but just a few months later in March 2012, "things sort of fell apart," said Salman. "Everyone started to realize that we all wanted to do different things." Salman moved back home to Santa Barbara, nursing a sense of loss but bursting with new melodies. That's when he began working on songs for the band's first full-length album.

In March, Salman returned to Berkeley and convened yet another new lineup — with Murphy on congas and percussion, Scott Brown on bass, Drew Brown on guitar and synths, and Johnson on drums. Salman said this new lineup is the strongest yet. "This is the easiest incarnation of the band in terms of our chemistry — it's so natural," he said. "There's no butting heads and we're so productive. It's very much a collaborative thing, even if the original idea is mine." So far, the band has played shows at Slim's and The New Parish, and, in addition to its successful Little Dragon cover, was featured in a video of professional mountain biker James Doerfling on the extreme sports site EpicTV.

Salman said he has dreams of playing music full-time, but his main goal is achieving synergy with his fans. "I think Waterstrider is based in this co-op mentality of that shared experience and intention," he said. "In this era of music there's a lot of disconnect between the audience and artist. I'm less interested in achieving the mythos than achieving a sense of connection to people — that's the most important thing you can do as an artist and a human being."