The city's complicated and sticky process for licensing cannabis grows has prompted many cultivators to remain in the shadows. 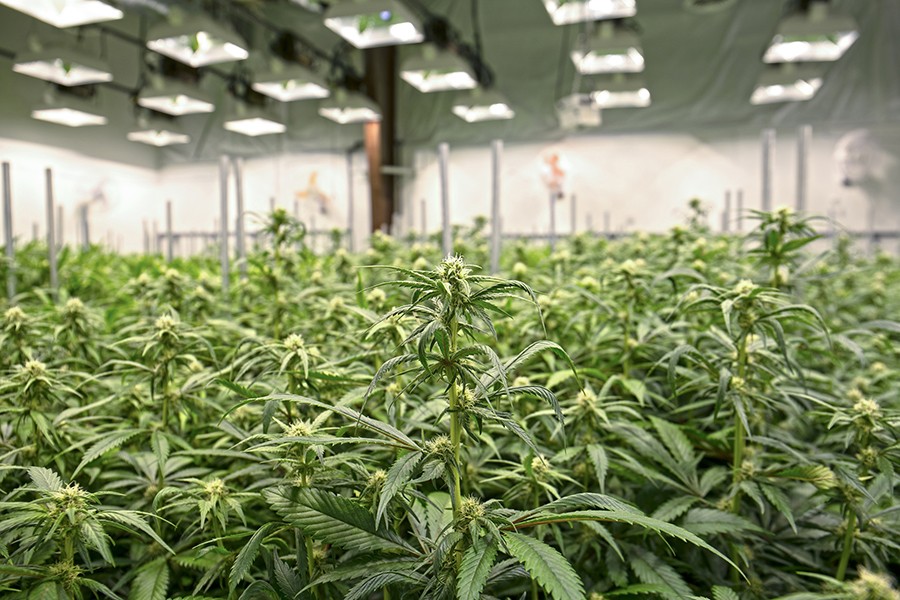 Richmond has always been defined by industry. The town grew up around a bustling oil refinery that began operating in 1901. And over the years, hundreds of major industrial businesses found the city accommodating and convenient: Pullman Palace Car Shops manufactured railway cars; Winehaven, the largest winery in the country, operated on the northwestern shore; and other companies such as Standard Sanitary Company, Stauffer Chemical Co., and America Radiator thrived in a city that is favorably located for cargo ships, freight trains, and tractor trucks.

The working-class city's reputation for industry grew during World War II, when the Kaiser Richmond Shipyard built one of country's largest shipyards on the city's southern shore and began churning out hundreds of Liberty and Victory ships.

Today, a byproduct of the city's roaring industrial activity is an abundance of warehouses. There are hundreds in the city's light industrial zone and they contain millions of square feet of manufacturing space that is perfect for commercial cannabis operations. In fact, there are dozens of illegal indoor farms currently operating in Richmond's warehouses. So much so that the warehouse vacancy rate is at 1 percent, the lowest it's been in decades. By comparison, office space in Richmond has a 20-percent-vacancy rate.

The demand, mostly generated by weed farmers, has caused warehouse lease prices to skyrocket, according to real estate attorney Daniel Butt, who is the son of Mayor Tom Butt and a consultant to businesses applying for city cultivation permits. "Just a couple of years ago, warehouse owners were lucky to get 60 cents a square foot," Butt said. "Now, they're getting $2 to $2.50."

With the official legalization of recreational cannabis scheduled for Jan. 1, Richmond has found itself on the cutting edge of a new industry, and city officials are finding that creating effective regulations for large-scale commercial cannabis cultivation is a sticky process. "There is a huge demand for indoor space to grow marijuana," said Mayor Butt. "The permitting process is expensive and complicated, and making matters worse, the city seems unwilling to do anything about the illegal operations that are all over the place. It's like the Wild West out there."

But the city requires potential commercial pot growers to submit an application that includes a detailed security strategy customized to the site and show that the operation will only use 100 percent renewable energy. Growers also must have a code-compliant warehouse and obtain a conditional use permit. The permitting process can cost applicants hundreds of thousands of dollars. Plus, there are reoccurring inspection and permit fees and a 5 percent sales tax on gross receipts — all of which can add up to $100,000 a year for compliance with city regulations.

The burdensome cost of fees, permits, and paperwork has prompted many growers, who have operated successfully for years on the black market, to remain in the shadows. Developer Mark Howe, who owns 400,000 square feet of warehouse space in Richmond and manages another 200,000, said the overhead for a legal grow is shrinking profit margins at a time when the price per pound of pot is expected to drop due to the state's huge supply. "I know people who are sitting on huge stockpiles because they can't move them," Howe said of cannabis growers. "And it doesn't look like cities and counties are going to approve enough dispensaries to accommodate all the marijuana grown in the state."

The growers who choose to operate in the dark are worrisome to the public. Illegal grows in warehouses and homes are notorious for fires related to overloaded electrical circuits that are often dubiously connected by a network of extension cords, electrical tape, and prayer. These illegal indoor grows go completely unregulated; they're never inspected by city regulatory agencies.

Sgt. Nicole Abetkov of Richmond's police regulatory unit did not return numerous calls seeking comment on the dozens of illegal grows operating in the city, and city fire inspector Eric Govan said he was aware of unpermitted warehouses, but when pressed for details, he abruptly ended the call.

Mayor Butt said city departments have been part of the problem. "I'd like to see them red tag every one of the illegal operations," he said. "That way, they'd have to apply for permits and pay fees and taxes if they wanted to keep operating in Richmond."

Despite the complications, city planners are eager to work with potential pot cultivators. The planning department has approved at least three cultivation operations and in one case is trying to approve permits for a large-scale illegal grower that was operating in a 70,000-square-foot building on Hensley Street. The operation was red-tagged, although the size of the indoor farm had so much revenue potential that instead of destroying the plants and ripping out the elaborate grow lights and watering systems, the city allowed the growers to apply for permits, which they agreed to do.

Richmond is a pioneer in California's new era of the legal cultivation and distribution of weed, and the biggest challenge for the city is to apply reasonable policies that will bring black market cultivators into the light of day so they can start, like other legal businesses, to contribute to schools, public safety, health care, and infrastructure. Mayor Tom Butt is convinced that will happen eventually. "It's my goal to get all of these cultivation sites permitted and operating legally," Butt said. "Richmond is one of the first cities to license cultivation under the new state law so it may take some time, but at least we've got a start." 