Want to Donate Your Leftovers to Feed the Hungry? There’s an App for That.

Komal Ahmad picks up some food.

Two years ago, as a fourth year student at UC Berkeley, Komal Ahmad co-founded the nonprofit BareAbundance with a simple mission: to feed the hungry and reduce food waste by partnering with organizations like Cal Dining to redistribute leftovers to local soup kitchens, food pantries, and homeless shelters.

Here’s how it typically worked: Ahmad would get a phone call from a campus dining hall manager, who would tell her how much leftover food he had and how soon it would need to be consumed. Then she would call about thirty different hunger relief agencies in the Berkeley area. But, according to Ahmad, the problem was that about half of the agencies wouldn’t even pick up the phone, and the ones that did would often tell her they could only use a small portion of the leftover food.

In short, the process was a pain — a reminder of why so many hunger-alleviation organizations choose to work with raw ingredients or canned goods rather than the logistical nightmare of handling large quantities of highly perishable food. For a while, Ahmad wondered if there was any way to make things more efficient.

The answer, it turns out, was technology.

Rebranded as Feeding Forward, Ahmad’s Berkeley-based organization now has a new centerpiece: a smartphone app that streamlines the entire process of making a food donation. Now, Ahmad said, potential donors only need to enter a brief description of the food, snap a photo of it with their smartphone, and specify when the food needs to be picked up and how big a vehicle will be needed to transport it. The app identifies the donor’s exact location and sends details about the food to a virtual marketplace, using an algorithm to match the specific food type (e.g. “sandwiches” or “fruit”) with a human service organization that can use the food at that particular day and time. The app also identifies nearby members of Feeding Forward’s brigade of volunteer transporters who can pick up the food, usually within the hour.

The entire process takes no more than a couple of minutes. And once the food is dropped off at a soup kitchen or homeless shelter, the volunteer will take a photo of the food being distributed and send it back to the original donor. That way, donors can see that their efforts are having an impact — that the food “wasn’t just lost in outer space,” Ahmad said.

Readers might recall that LeftoverSwap, another recent tech startup geared toward the redistribution of uneaten food, was the subject of numerous tongue-in-cheek write-ups. (One local food writer used it to locate a nearby bag of half-eaten tortilla chips.) But while the mechanics of the apps are somewhat similar, Feeding Forward is more serious-minded in its ambitions. Here, the goal isn’t just to cure a case of late-night munchies, but to make a dent into some fairly daunting statistics: the 263 million pounds of food that are thrown away in America each day and the roughly 50 million Americans who face hunger on a daily basis.

“Food is a fundamental human right, and it’s staggering that in such a wealthy and powerful nation, so many people end up begging for it, while in our homes, restaurants, supermarkets, dining halls, and offices, we waste so much,” Ahmad said.

According to Ahmad, Feeding Forward has distributed between 350,000 and 400,000 pounds of food throughout the East Bay and in San Francisco since the company launched in May of this year, and she hopes to eventually extend the service on a national and even global basis. Currently the Feeding Forward app is only available for iOS, but an Android version is almost ready for release. Non-smartphone users can arrange donations through the organization’s website. 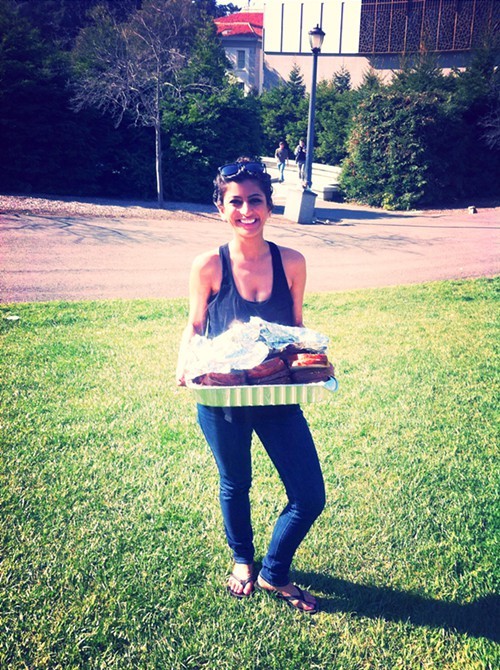 For now, Ahmad is focused on expanding the company’s existing virtual “leftovers marketplace” in the Bay Area — in particular, by getting brick-and-mortar restaurants involved. So far, only Berkeley’s Sliver Pizzeria regularly uses the service to donate food.

Sliver co-owner Guillermo Perez said when Feeding Forward first reached out to his restaurant, “We thought it was an amazing idea — right up the alley of what we want to do, which is to be more of a community-based business.” Perez said that Sliver donates pizza through Feeding Forward about once or twice a month.

Other participants include all of UC Berkeley’s dining halls and concession stands, tech companies like Twilio and LinkedIn, and some local religious institutions. Individuals can donate, too, but there’s a ten-pound food minimum — so it’s more for when you have several dozen bagels leftover from your kid’s bar mitzvah, not when you don’t feel like eating the other half of your pastrami sandwich.

Ultimately, Ahmad said that Feeding Forward is a great example of how technology can be used to do good — simply by streamlining a previously clunky process. “We want to do good,” Ahmad said, “but we don’t have a lot of time.”