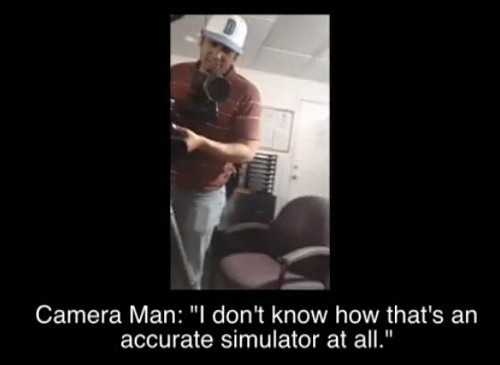 Denver Westword's William Breathes points us this morning to a fabulous illustration of dumb TV media bias against people who smoke pot. A Fox News affiliate in Colorado subjected three stoned drivers to a simulator to videotape how they did. The catch: the simulator simulated driving an 18-wheel truck, and the testers rigged it for crashes.

When Fox News got the simulated "collisions" they were looking for, we hear "Cut!"

Turnabout is fair play, though. One of the medical marijuana patients, Max Montrosee, recorded the entire Fox News shoot to show how he was unfavorably edited. He also catches the Fox News cameraman admiting that the simulator was a setup.

"Patients receiving treatment with MARINOL® Capsules should be specifically warned not to drive, operate machinery, or engage in any hazardous activity until it is established that they are able to tolerate the drug and to perform such tasks safely," the FDA states.

We can look forward to more rigged dope studies in the time to come.