Sample schedule for a typical day (via Kitchener Oakland)

Sample schedule for a typical day (via Kitchener Oakland)

Sophia Chang, the proprietor of Kitchener Oakland (372 24th St.), said she never intended to give up her office. But then one of the food entrepreneurs at her Uptown Oakland commercial kitchen came to her with a crazy idea: Convert the two big windows in the office into takeout windows to sell all the delicious food that the 36 artisans based at Kitchener were cooking every day — a sort of hyper-local snack bar.

So was born the Kitchener Takeout Window Project, which could be the most innovative food-business model to hit the Bay Area since Guest Chef shut its doors last year. 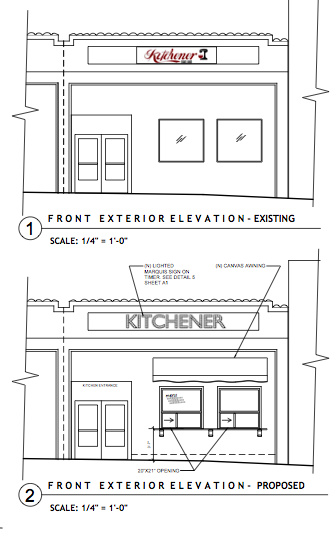 While Guest Chef was in some ways a more ambitious, higher-risk project — since, as a sit-down restaurant, there were higher overhead expenses — Kitchener’s new initiative addresses a similar challenge: For many food entrepreneurs, the cost of opening a brick-and-mortar shop is simply too high. At Guest Chef, chefs only needed to commit to a two-week stint, paying the restaurant owner a cut of their profits in exchange for the opportunity.

In the case of Kitchener, the idea is for the incubator kitchen’s fledgling food businesses to pool their resources to create a shared brick-and-mortar outlet. Each participant will pay $5 to $10 an hour to rent a window — money that will go almost entirely toward utilities, maintenance, and advertising. Chang explained that since the space is so tiny — just 200 square feet — it won’t cost much to keep it running, so she doesn’t feel a need to take an additional cut. Participants will keep 100 percent their profits, making the snack bar a much more palatable proposition financially than, say, selling at a farmers’ market or a food truck gathering.

For those who live and work in this section of Uptown Oakland, the windows will provide a much-needed takeout option. Chang said she’d like the snack bar to be open from 7 a.m. to 11 p.m. daily, with individual food businesses taking three- or four-hour shifts at each of the two takeout windows. 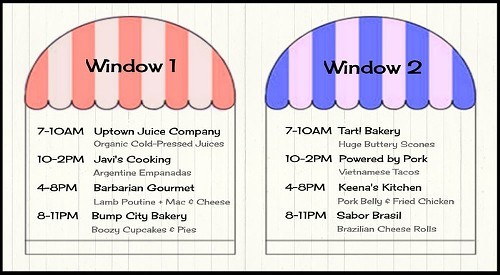 Variety will be a big perk, as every few hours the sign outside will change to indicate which food artisans are in the house — like the marquee at a movie theater, Chang explained. Occasionally, the snack bar will also host pop-ups from other local chefs who aren’t part of Kitchener’s immediate community of food entrepreneurs.

Chang said the project will technically only be permitted as a snack bar rather than as a takeout window, which means that food can only be reheated, not cooked on-site — not a major hindrance, however, given that the facility’s main kitchen will only be a few steps away.

Javier Sandes, of Javi’s Cooking, who came up with the idea originally, explained that his initial inspiration was the kioscos (small kiosks) that are a ubiquitous feature of cities in his native Argentina. In Buenos Aires, for instance, they sell all kinds of goods and services: candy, milk, cheese, rotiseria (Argentinian deli) dishes, and even shoe repair.

Sandes noted that about 70 percent of his empanada business currently comes from wholesale contracts, a model that only allows him to take a small cut of the profits from each sale. For him, the takeout window model presents an opportunity to take more control over his business — but without the risk inherent in leasing a brick-and-mortar space of his own.

Another entrepreneur at Kitchener Oakland, Shawn Walker-Smith of Tart! Bakery, said that his company’s scones and other baked goods are mostly only available at Temescal’s Arbor Cafe, his largest wholesale client. According to Walker-Smith, the lack of a brick-and-mortar storefront is one of the biggest hindrances to the growth of his business: “Whenever I have a pop-up, that’s almost invariably the first question: ‘Oh, where can I find your stuff?’”

Being able to list a permanent location and specific hours on his business’ website and Facebook page would be a step in the right direction, Walker-Smith said. Plus, he plans to experiment with different kinds of offerings — say, panna cotta, flan, or certain composed desserts — during the snack bar’s evening hours, as a test run for his ultimate dream: a late-night dessert bistro of his own. 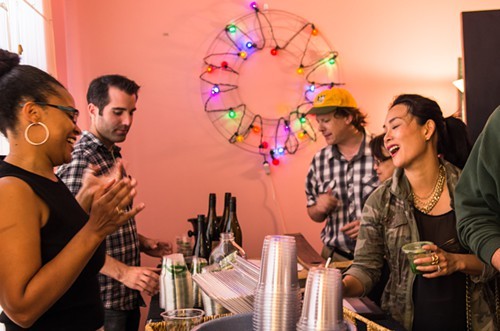 Kitchener has launched a Kickstarter campaign, which, as of this posting, has raised about one-third of its $25,000 fundraising goal. The money will help cover the cost of equipping Chang’s soon-to-be-converted office (the installation of hand-washing sinks, warming ovens, and so forth) as well as significant changes to the building’s facade, including an awning that will allow for interchangeable signs (to clearly mark which artisans’ “shift” it is) and an eye-catching circus-lights-style “Kitchener” marquee, which should be a literal beacon of light in what has previously been a somewhat dimly lit area at night.

The new takeout window will also give back to the community through a pay-as-you-can option during certain hours each week, allowing folks who are hard up get “a hot meal with dignity,” Chang said. Kitchener would subsidize the program, compensating the food artisans for the difference. And, further down the road, Chang would like to turn the area outside of Kitchener into a parklet, where customers would be able to enjoy food from kitchen and, eventually, beer and wine as well.

If all goes well, the snack bar will launch in April.