We were deeply saddened to hear about the passing of local trumpeter Khalil Shaheed, who died Friday after a long battle with lung cancer. Raised in Chicago, Shaheed - who was born Tommy Hall - came to California in the Seventies, started gigging in the funk, Latin, and jazz scenes, and quickly consolidated his career as both a leader and sideman. Shaheed rechristened himself after converting to Islam in the Eighties; he also adopted a more ascetic lifestyle and began devoting himself wholeheartedly to community service. In 1994 he founded the music education program Oaktown Jazz Workshops, through which he taught kids how to improvise and perform in a live setting. The program endured for decades as Shaheed continued performing and hosting jam sessions at such now-defunct local clubs as Bluesville and First Stop (so named because it was the first stop in after the Amtrak station, he once told me). He also formed the Mo'Rockin' Project, a world music group that fused Moroccan styles with American jazz. 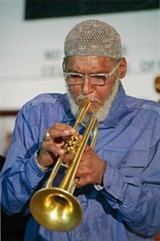 As recently as June of last year, Shaheed was planning the next chapter for Oaktown Jazz, having secured new digs at the old Tony Roma's in Jack London. Called Nadine's, the new venue promised to serve "jazz and juice" (literally, since it didn't have a liquor license), and add a youthful element to Oakland's newly-revitalized waterfront. It was the first time the after-school program had a permanent residence, and city leaders - including Jean Quan and Port Director Omar Benjamin - pledged resounding support.

Although Shaheed passed away shortly after the venue's genesis, it will be part of his vast legacy, and Oaktown Workshops will continue there under the direction of Ravi Abcarian. Shaheed will be mourned and missed by members of the jazz scene, and by Oakland at large. Percussionist John Santos wrote an encomium on Saturday in which he described Shaheed as "a wonderful friend, colleague, father, mentor and human being - a grand soul." Santos also noted, without exaggeration, that few people are as well-respected by multiple generations within a community.
Shaheed's family asked that donations be made to the trumpeter's non-profit, Oaktown Jazz Workshops, in lieu of flowers. (You can also send donations to P.O. Box 3568, Oakland, CA 94609). There will be a memorial celebration at Nadine's in April.