Um, Did You See the Delorean Hovercraft on the Bay?

The Delorean hovercraft in action.

If you were jogging on the Bay Trail or cruising down Frontage Road yesterday at around noon, you might have thought you’d woken up in 2015 — or been blasted back to 1985. A DeLorean that looked like it came straight out of Doc Brown’s workshop was cutting up the bay waters between the Emeryville and Berkeley marinas, making spins and flapping its gull-wing tail feathers. A couple hundred feet north of the Emeryville harbor, where I-80 hugs the bay, a ten-foot cardboard sign declared, to the tune of (jk) Carly Rae Jepsen’s “Call Me Maybe”, “Hey I just built this / And this is crazy / But watch me hover / And hire me maybe?” 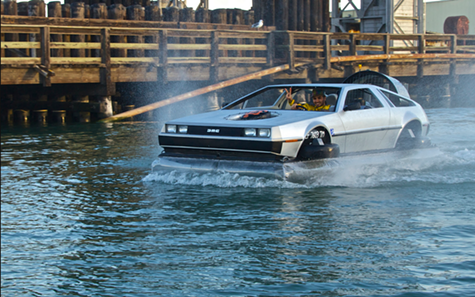 The Delorean Hovercraft, which spun 360s for Giants fans in McCovey Cove last August, was putting on an East Bay show for ABC News cameras, according to the hovercraft’s Facebook page. But grad student Matthew Riese, the father of the machine, might as well have been giving a solo performance for each of us who screeched our bikes to a halt and whipped out our camera phones, hoping we could catch Marty McFly stopping over on his way back to Hill Valley. (Riese didn’t respond to requests for comment in time for publication.)

The only thing that would have made the whole surreal experience even dreamier is if it were a bona fide 1981 DeLorean, gutted and rebuilt. But Riese explains in his Maker Fair profile that he actually built the thing from scratch out of sculpted foam, fiberglass, aluminum, and wood, and set it atop of large inner tubes. Make Magazine blogged last May that this baby can cruise over any flat surface, but according to PC Mag it is officially registered with the DMV as a boat.

Riese explains in his 2010 Kickstarter campaign video that, like everyone who grew up in the Eighties and Nighties, he dreamed of having his own hoverboard or DeLorean or some combination thereof. And in the sticky sweet spirit of Dreams Really Do Come True, he set to work to build his own in 2008 at age 24, and completed it with the help of a successful $5,500 Kickstarter campaign two years later. “I think I’ve always really wanted to believe that life can be epic, that great things are possible,” Riese says in the charmingly humble narrative of his video.

You can follow the hovercraft on Twitter @DaveLorean or just keep your eyes on the bay on a sunny day, and hope to see magic.