Tuesday's Briefing: Trump is coming to the Bay Area, but nobody knows where; Newsom asks Trump for housing vouchers 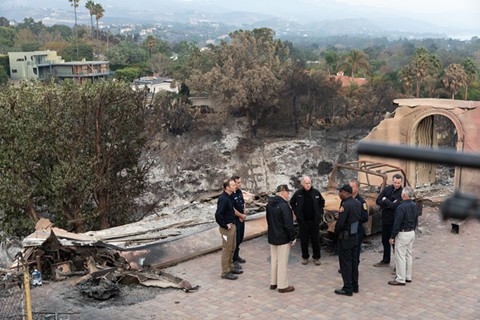 1. Don’t all get excited at once, but President Trump is scheduled to visit the Bay Area for the first time during his presidency today. But where the event is being held is somewhat of a state secret. Meanwhile, SFGate reports the ubiquitous balloon depicting Trump in baby diapers is likely to make an appearance.

3. More than 1,200 students from 17 universities across the country, including U.C. Berkeley and Stanford are pledging not to work for software company Palantir because of its contract with U.S. Immigration and Custom Enforcement, The Hill reports.

4. Alice Waters, the founder of Chez Panisse in Berkeley, said she never liked the name “Gourmet Ghetto,” referring to the area where the world-famous restaurant is located, and thinks the name should be changed, the San Francisco Chronicle reports. $$

6. Cal football’s 3-0 start has earned them their highest ranking in nearly four years, the San Francisco Chronicle reports. The Golden Bears head to Mississippi on Saturday ranked 23rd in the nation. $$