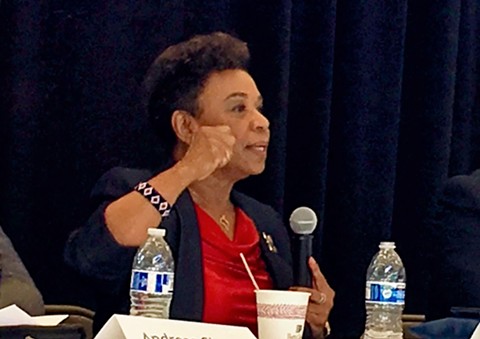 News you don't want to miss for July 30:

1. The gunman alleged to have killed three people at the Gilroy Garlic Festival on Sunday was carrying an assault rifle-like AK-47 bought legally in Nevada, CNN reports. The type of firearm, however, is illegal to be purchased in California.

2. East Bay Rep. Barbara Lee is in Ghana attending the 400th anniversary of the slave trade from Africa to the U.S., the Voice of America reports. Lee is part of a congressional delegation that includes Speaker Nancy Pelosi

4. Hayward Councilmember Aisha Wahab’s campaign for Rep. Eric Swalwell congressional seat appeared tenuous after he quit his run president earlier this month. On Monday, Wahab suspended her progressive campaign for the 15th District, but did not elaborate on what suspend means, the East Bay Citizen reports.

5. Ghost Ship trial: Alameda County prosecutors made their closing arguments in the deadly Oakland warehouse fire that killed 36 people in December 2016, saying Derick Almena and Max Harris, the two men charged with involuntary manslaughter were negligent when they failed to procure various permits for the building, the Associated Press reports.

6. A Marin county supervisor wants to consolidate Metropolitan Transportation Commission (MTC) and Associated Bay Area Governments (ABAG) into one regional mega-board, the Marin Independent Journal reports. In 2016, MTC and ABAG agreed to merge their staffs. But consolidation could lessen the power of elected officials in Alameda, Contra Costa, and San Francisco Counties.

7. NIMBYs have been derided by many in the Bay Area for exacerbating the housing crisis. "The scale of this problem has fractured the voters of this largely progressive region, pushing Californians of varying political stripes into rival camps that don’t neatly subdivide along the usual left-right lines." CityLab offers a more nuanced view of both sides of the debate.