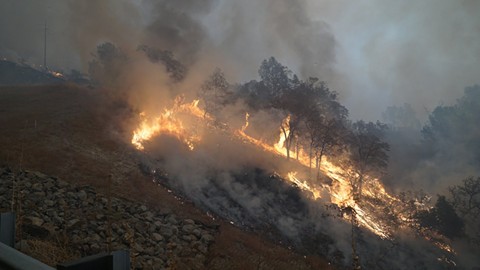 1. The death toll in the Camp Fire rose to 42 last night — and could go higher — making it the deadliest wildfire in California history, the Sacramento Bee$ reports. The massive blaze has grown to 125,000 acres and has destroyed nearly 7,200 structures in the town of Paradise. Hundreds of people are still missing in the disaster.

2. Democrats have taken two-thirds control of both houses of the California Legislature, meaning they can pass any type of legislation without Republican help, reports John Wildermuth of the San Francisco Chronicle$. Thanks to late mail-in and provisional ballots, Democrats won two close state Senate races in Salinas and Fresno County. Democrats also won every statewide election contest on Nov. 6.

3. East Bay Assemblymember Tony Thurmond has taken the lead in the state superintendent of schools contest over charter school advocate Marshall Tuck, reports Louis Freedberg of EdSource. Thanks to late mail-in and provisional ballots, Thurmond now leads by about 3,500 votes.

4. Hate crimes jumped 17 percent nationwide in 2017, and anti-Semitic attacks soared 37 percent throughout the country compared to the previous year, the Washington Post$ reports, citing new data from the FBI. “Of the more than 7,000 incidents reported last year, 2,013 targeted black Americans, while 938 targeted Jewish Americans. Incidents targeting people for their sexual orientation accounted for 1,130 hate crimes, according to the FBI.”

5. Air quality in the Bay Area and much of Northern California is expected to remain unhealthy at least until Friday because of smoke from the horrific Camp fire, reports Sarah Ravani of SFGate. Ninety percent of schools in Sonoma County are closed because of air pollution.

6. And Stan Lee, who launched the modern comic book industry, creating flawed, complicated heroes like Iron Man, Spider-Man, X-Men, and the Incredible Hulk for Marvel Comics, died on Monday at the age of 95.