The Tesoro refinery near Martinez.

1. Two more workers at the Tesoro oil refinery near Martinez were splashed with acid in an incident at the same part of the facility in which two other workers suffered acid burns last month, the Chron reports. It’s also the same refinery that refused to allow federal inspectors into the facility — a stance that is believed to be unprecedented. Federal authorities say Tesoro has still not been fully cooperative regarding the first acid incident. 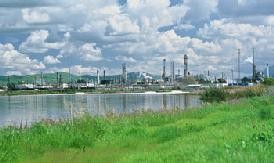 3. Gary Hendel, the new director of the Oakland Animal Shelter has been placed on paid leave pending an investigation into a personnel matter, the Trib$ reports. The troubled shelter has gone through a series of directors in recent years.

4. The state Assembly passed an ethics reform bill that would allow the California Fair Political Practices Commission to investigate anonymous campaign donations — known as dark money — during campaigns, the LA Times$ reports. The bill is part of a slate of political campaign reform measures, but the other legislation has stalled in the state capital.

5. State Attorney General Kamala Harris announced new legislation to deal with rampant truancy in California schools, the Chron reports. Harris noted that many students who drop out of school end up in jail for committing crimes.

6. And most Alameda County elected officials will face no challengers in this year’s election, the Bay Area News Group$ reports. The incumbents who are running unopposed include supervisors Wilma Chan and Richard Valle, Sheriff Greg Ahern, and District Attorney Nancy O’Malley.