1. A statewide measure that has qualified for the November 2016 ballot could block Governor Jerry Brown’s controversial plan to build two giant water tunnels underneath the fragile Sacramento-San Joaquin River Delta, the LA Times$ reports. The measure, which was certified yesterday by the Secretary of State’s Office as having gathered enough signatures to qualify for the ballot, would require voter-approval for any plan by the state to use more than $2 billion in revenue bonds for a major infrastructure project. Brown wants to use at least $15 billion in revenue bonds to pay for the water tunnels — so if the ballot measure is approved next year, he would then have to obtain voter-approval for the project. 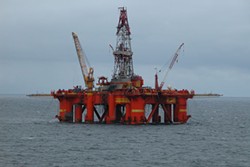 2. The oil industry spent nearly $11 million on lobbying and campaign ads to gut landmark climate change legislation in California this summer, the SacBee$ reports. And the effort was successful — after the huge expenditures by Big Oil, moderate Democrats in the state legislature removed a key portion of a bill that sought to reduce gasoline usage in California by 50 percent.

3. The plastic bag industry, which is sponsoring a measure to overturn California’s ban on plastic bags, has decided to back a second plastic bag ballot measure for November 2016 — apparently hoping that the two statewide propositions will confuse voters and prompt them to vote down both the bag ban and the industry-sponsored measure, the Bay Area News Group$ reports.


4. Volkswagen not only lied on emissions tests involving Volkswagen and Audi vehicles, but also involving Porsches, The New York Times$ reports (via the Chron$). Volkswagen defrauded the tests so that its pollution-spewing diesel cars could pass them.

5. And a new study shows that US teens spend nearly seven hours a day in front of screens — entertaining themselves with television, online videos, music, games, and social networking, the Chron$ reports.