California prisons fail to help abuse victims and the mentally ill rehabilitate behind bars — and refuse to grant them parole so they can turn their lives around with loved ones on the outside.

Michael Flemming fears he will be forgotten. During a phone interview last month from San Quentin State Prison, he said one of the hardest parts of serving an indefinite prison sentence is coming to terms with the reality that he might not live to experience freedom again. "When you are in prison as long as I am, being remembered for something good in my life becomes very important," said the soft-spoken, 53-year-old inmate, his voice shaking. "I have an intense fear of dying while still in prison."

Not long after of our conversation began, Flemming admitted he had anxiety about talking to me. "Right now, I'm incredibly nervous," he said. He told me he was learning how to speak up for himself more and had recently become a lot better at talking about dark memories or sharing his feelings in various prison support groups. "I speak in front of large crowds," he said. "I'm practicing and getting more confident."

Flemming knows that if he can't talk openly about himself and articulate what happened to him when he was young, he could end up dying behind bars. That's because in order to make it out of prison, he will have to survive an hours-long interrogation that seems designed to break him down.

Flemming has spent 32 years behind bars for killing a police officer in a drunken-driving crash on October 19, 1983 in Mojave, a small town in Kern County, two hours north of Los Angeles. According to his records, Flemming, then 21 years old and a severe alcoholic, robbed a supermarket while armed and extremely intoxicated. As he fled the scene in a stolen truck, he crashed head-on into an officer responding to the robbery. Kern County Sheriff's Office Deputy Michael Bentley, 33, did not survive.

Prosecutors subsequently charged Flemming with first-degree murder and a judge sentenced him to 25 years to life — meaning a life sentence with the possibility of parole. He officially became eligible for parole in 1999 (prisoners with good behavior generally become eligible for early release), but he has not been able to convince the California Board of Parole Hearings that he is ready to come home. The parole board is made up of commissioners who are appointed by the governor; most have extensive backgrounds in law enforcement. In order to receive a parole grant, Flemming has to demonstrate that he is no longer a danger to society, is genuinely remorseful, and has a deep understanding of why he committed the offense.

But every time he tries to explain how he ended up crashing his car so many years ago, his answers never come close to satisfying the commissioners or the Kern County District Attorney's Office, which has vigorously argued for his continued incarceration. He told me that he became particularly incapable of addressing the parole board when, early into his hearing on September 3, 2014, Commissioner Marisela Montes confronted him about one of the worst traumas of his life.

Flemming, Montes noted, had reported during a prison psychological evaluation that two men had raped him when he was fifteen years old. According to the board's official transcript of the hearing, Montes' first question about the abuse was: "Why'd you wait twenty years to tell anybody about that?"

Flemming stumbled, trying to explain why he finally decided to tell his wife. "I just happened to blurt it out over the phone," he said. "I had not even told my mother and father."

"So what were the names of the people who molested you?" Montes continued.

"I would rather not say," he replied. "One — one's dead and the other one has a significant family back home."

After Flemming explained that the men, who were friends of his family, had become physically violent and sexually assaulted him, Montes asked him once again why he didn't report it.

"I, I never told anybody until it just became so, an unbearing [sic] mass of, of, of pain. I guess the best way I could describe it is just a mass of blackness inside me," he said.

A third time, she asked him how he managed to keep the rape a secret from his parents considering the anxiety, depression, and nightmares it caused him. 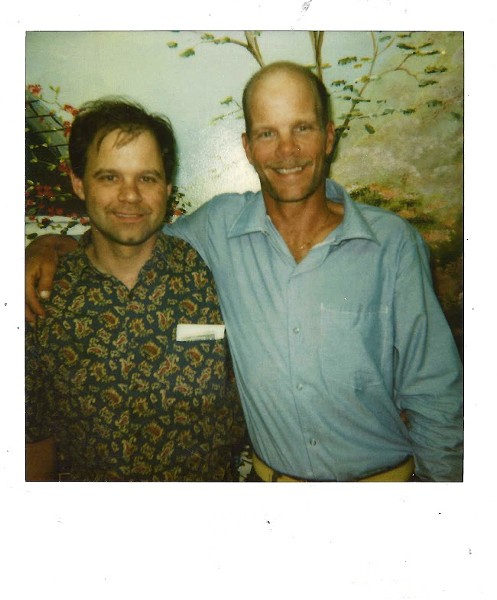 Flemming then repeatedly emphasized that he takes full responsibility for the fatal crash, saying, "I committed a reckless and horrible act. ... There is no legitimate excuse for the taking of a human life. ... I was a despicable, reckless human being." But he also tried to explain that the childhood sexual assault contributed to his alcohol abuse as a teenager, which was clearly a central factor in the crash that day.

Montes didn't buy it. At the end of the hearing, she announced that the board would once again deny Flemming parole — for the sixth time — because he is still unable to articulate the underlying reasons why he killed Deputy Bentley. Referencing his testimony about the rape, she added: "A lot of these factors that you point to don't really get to the heart of the issue. They're external factors. They're things that other people did to you — almost describing yourself as a victim."

Flemming, speaking to me by phone more than a year later, said he did his best during the hearing to maintain his composure, but fell apart when Montes continued to badger him about being molested. "For her to even imply I'm not telling the truth sent me spiraling out of control into a downward depression right there in [front of] the board," he said.