Housing Goal: The state has asked Oakland to build at least 14,765 housing units between now and 2023. That amounts to 1,845 new housing units a year. It's all part of a regional assessment to determine how much housing the Bay Area needs to build in order to keep up with growth.
But in 2015 Oakland didn't come close to meeting its goal.
Measured by the number of building permits issued, Oakland started 771 new housing units, or 41 percent of its goal. Most of this was market-rate housing.
In terms of affordable housing, Oakland failed. To keep up with the state's minimum goal, Oakland should be building 560 housing units each year that are affordable to people who are extremely-low to low-income. But the total number of affordable housing units built in Oakland last year was 128, a mere 22 percent of the goal.
At Tuesday's community and economic development committee the council will hear a full presentation on Oakland's housing numbers, and consider other ways to stimulate housing construction. 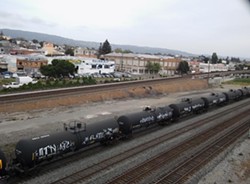 Crude Oil: Oakland's coal controversy has raised another specter; whether developer Phil Tagami could build a liquid fossil fuel export terminal on the waterfront and run trains carrying crude oil, fuels, or other petroleum-based commodities through the city at much higher frequencies than already occurs.
In June of 2014 the Oakland City Council actually passed a resolution opposing the transport of oil and other fossil fuels through the city, but this occurred after the city already signed a development agreement with Tagami's company allowing him to build the Oakland Bulk Oversized Terminal (OBOT) at the old Oakland Army Base.
On Monday night, the city council will hold a special hearing to collect evidence and hear testimony regarding the health and safety impacts of transporting oil and other fossil fuels through Oakland. The information gathered will be incorporated into the report that Environmental Science Associates is writing for Oakland, which is intended to inform a council decision later this year about whether or not to ban fossil fuels at the OBOT marine terminal.
Some interesting information that will be presented at the hearing: how much crude oil and other liquid fossil fuel products already travel through Oakland? Where is this oil currently headed?

Data Disaster: Oakland's data, all the information that makes the city work – from tax records to police dispatch systems to building permits – is at risk. According to a city staff report, the data centers that Oakland relies on to store data, communicate, and process financial transactions "are located in various City buildings and are rapidly aging, and face increasing vulnerabilities such as power and environmental failures and/or data security breaches, which would compromise the operational and financial health of the City."
In fact, there have been twelve recent incidents where equipment failures took down mission critical IT infrastructure. They included a "primary and backup power failure" in June of last year that took down police and fire dispatch capabilities, and an incident in October that took down the city's email system.
City staff are proposing a $3 million contract to fix this. Actually, $3 million is the down payment for "Phase I" of a two phase project to migrate Oakland's data centers to a single location.

Correction: the original version of this blog post stated that the city council's informational hearing on fuel oils would be held on Tuesday night. The correct night is Monday, May 9.