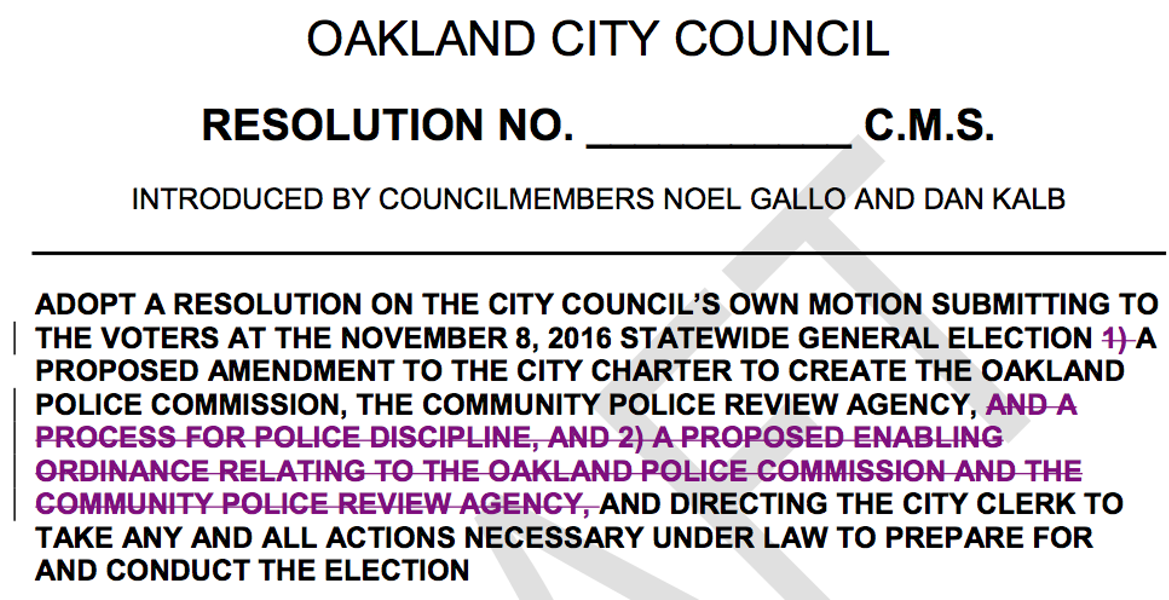 Last Friday, the Oakland City Council convened a special closed session meeting to secretly debate what powers a proposed civilian police commission should or shouldn't have. As Robert Gammon of Oakland Magazine observed, the conclave happened because the Oakland Police Officers Association has threatened to sue the city council to prevent them from placing a measure on the ballot that would overhaul the existing police discipline process.

So what made it out of last Friday's meeting? What's going to be voted on at this Tuesday's special council meeting? Did the police union really succeed in "gutting" the police commission?

Here's some highlights of the most recent version of the police commission ballot measure drafted by Dan Kalb and Noel Gallo, posted as of last night on the city's web site.

Some have criticized giving the mayor and administrator these roles because they could be used as a means of influencing the commission. Reformers say these powers will inevitably politicize the agency's investigations and the commission's decisions.

Oakland Mayor Libby Schaaf said in a written statement, however, that allowing the mayor to directly appoint commissioners is appropriate.

"The Mayor is the most directly accountable official to the people," Schaaf said in a statement issued today. "It is a well-constructed composition with appropriate checks and balances. The appointments must each be confirmed by the City Council and always are a minority. The majority are appointed by an independent board. Appointees may not be removed and must meet certain qualifications, thus are unlikely to be subject to political influence."

The Coalition for Police Accountability has lobbied hard for making the commission independent of the city attorney, so this is a win for the reformers.

The Coalition for Police Accountability has advocated giving the commission an unrestricted ability to accept or reject OPD's policies, but for anything that falls outside the scope of use of force, profiling, and 1st Amendment assemblies, the commission would only have the ability to review and comment.

Of course there's likely to be even more last minute amendments at Tuesday night's city council meeting. And of course, changing the existing system of police discipline is completely off the table. Oakland cops will continue to be able to contest discipline through binding arbitration. But as of this morning this is the police accountability legislation that will be on the November ballot.

Editor's note: this story was updated to include a comment from Mayor Libby Schaaf on the issue of allowing the mayor to make direct appointments to the police commission.