Last Friday, the City of Oakland made public a long-awaited study on the health and safety impacts of a proposal to build the largest coal export terminal in California at the foot of the Bay Bridge.

The gist of the study: coal is unhealthy and dangerous.

Developer Phil Tagami, and his business partner Jerry Bridges, are proposing to build a massive coal export hub. The terminal and warehouses would be capable of exporting five to seven million tons of coal per year. That's about one train comprised of 104 cars laden with coal traveling every day through Oakland and other East Bay cities to the terminal. To give you a sense of just how big a polluter this project would be, consider this: According to the city, the total greenhouse gas emissions produced each year, if all the coal exported through the OBOT is burned in power plants, would exceed the current emissions from all five oil refineries in the Bay Area.

But that's just one of the harmful environmental impacts the project will have.

The point of the city's study is that it provides the city with a scientific and legal basis for banning coal, and so today at 5 p.m. the Oakland City Council will vote on an ordinance to do just that.

The vote will close a contentious chapter in Oakland politics that has pitted politically-connected businessmen like Phil Tagami and Jerry Bridges — the guys behind the coal plan — against Oakland officials like councilmember Dan Kalb and Mayor Libby Schaaf, who both oppose coal. Tagami is a major political donor, real estate developer, and close friend of Governor Jerry Brown. Bridges used to be the executive director of the Port of Oakland.

All signs point to a majority of the council voting for the ban. But Tagami and Bridges aren't going out with a fight.

On Friday, David Smith, an attorney for Tagami's company, told the Express that Tagami's team is willing to go to court to overturn a coal ban if necessary.

"Should the city take action [banning coal], the developer will pursue all legal remedies," Smith said.

Tagami also fired back at anti-coal activists on Twitter last week. "This is a political stunt & your 15 minutes are up," Tagami tweeted at former Oakland mayor Jean Quan, one of the leading anti-coal organizers. Tagami cited various federal laws which he believes will allow his company to ignore any coal ban Oakland implements.

@jeanquan preemption of Federal law;commerce clause, shipping act, rail act,49 CFR 172. this is a political stunt & your 15 minutes are up

But city staff appear confident that the council can ban coal and withstand a lawsuit, if the developers file one.

"The Developer Entities have no right, under the [development agreement] or otherwise, not to be subject to the [coal ban]," staff wrote in a report to the council.

In addition to the threat of a lawsuit, the pro-coal interests are also trying to put last-minute political pressure on the councilmembers. 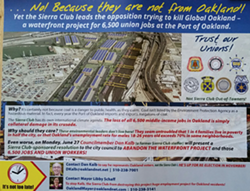 A mailer sent last week by a group called Jobs 4 Oakland portrays the battle over coal as one in which the Sierra Club is trying to "kill" the entire Oakland Global project.

"The Sierra Club has its own international climate agenda," reads the mailer. "The loss of 6,500 middle-income jobs in Oakland is simply collateral damage in its crusade."

The mailer's authors also claim that the Sierra Club's board of directors don't care about Oakland workers because they don't live in the city. The mailer concludes with a warning for Kalb: "He's up for re-election in November!"

It's not entirely clear who's behind Jobs 4 Oakland, but a letter the group sent to city officials earlier this month was signed by Ron Muhammed, a sometimes lobbyist who has supported Tagami and Bridge's coal plan at earlier council meetings.

The web site listed on the Jobs 4 Oakland mailer (jobs4oakland.org) does not work, and the group doesn't appear to be registered as a political action committee or lobbying organization with the city or state.

Anti-coal activists with the No Coal in Oakland coalition have also been putting pressure on city officials. On Saturday they held a rally outside City Hall.

Both sides can be expected to turn out their supporters for one last push at tonight's council meeting.