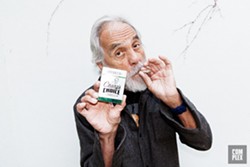 Comedian, actor, and cultural icon Tommy Chong returns to the Bay Area this weekend for the International Cannabis Business Conference. The entertainer and elder statesman of pot is releasing Chong’s Choice — a line of flower buds, available now in Washington state.

The 77-year-old is healing after a second surgery for cancer, and in our recent interview, he discussed the road to market for Chong’s Choice, his endorsement of Bernie Sanders, and his view on legalization in California. I talked to Chong by phone, and he spoke eloquently and swiftly, deftly moving from topic to topic and dropping zen-like little insights while preaching a message of tolerance, common sense, relaxation, and hydration.

Here’s some zen hits from the Chong.


1) On how regulating legal marijuana ‘is like old people learning how to use the cellphone.’

Chong: What we’re going through legally trying to get the product to the consumer — it’s been my observation over the years that we don’t need to reinvent the wheel, you know?

We have this system of growing it and processing it and selling it, and all we have to do is get the legal people out of the way. The police, get ‘em out of the way, and have the laws change so we can convert the bud into cash and the cash into checking accounts without any problem.

And all the testing — we’ve done all the product research. Whether it’s safe or not — that has been proven. We’re just trying to get the political system relaxed, without the fear, and show them results, and that’s what we have to do. We’ve done all the heavy work in Colorado. We can just point to Colorado and say, ‘There you go,’ and the rest of the country will fall into place.

It’s timing. Like — I was put in jail for bad timing. I was trying to sell a bong during a Republican administration, which is a mistake. And so the obstacles really are dealing with a mindset of a few generations that have been lied to and then industries have been created around the lie. So once the lie has been proven to be false, the industries have to focus on other activities.

What we’ve done is use my celebrity to promote the product, and each state has its own laws and own pitfalls, but there’s one thing we have in common — the elephant in the room, and that’s the black market, which still exists and is thriving. It’ll never go away. It bypasses the bureaucracy, the taxman. … [Cannabis] is the burning bush. It is the Tree of Life. It can feed you, it can cure you of diseases, and it can create commerce and economy. It’s magic. You don’t need money when you have pot. You can trade. And that’s why all we have to do is sit back and let the straight people join the learning curve. It’s like old people learning how to use the cellphone, is what’s happening.


2) On how discriminating against the new crop of Ivy League pot dealers is ‘like trying to tell the different flies on a piece of shit.'

That’s the magic thing about this plant — the plant touches all strata of society. You got the intellectuals, the university kids, right down to the ghetto. See how this plant is so magical? It created an economy amongst everybody.

There’s going to be the charlatans and the crooks wherever there’s money. You can’t separate it. It’s like trying to tell the different flies on a piece of shit. It doesn’t matter. The weed will attract people, all types of scams — everything. The great thing about bud is the proof is in the smoking. If someone nails you with some bad weed and you get a headache, well, you don’t get that guy again.

[People with MBAs] are trying to get a handle on it so they can be only one to carry this or carry that. What we’ve done is contacted the good growers and they’ve contacted us. We can back up our brand. When you get Chong’s Choice, you know you’re getting the best.

[I endorsed Bernie Sanders] for a lot of reasons. First of all, if I had a choice between Hillary and any Republican, of course I would go with Hillary, but having a choice with Bernie and Hillary — Bernie wins by a very slight margin. The reason he wins is authenticity and his motives. That’s what I love about Bernie. He’s real. He’s got a very profound reason for wanting to go through what he is going through. They talk about Hillary’s experience — well Bernie has the same experience and Bernie’s record is superior to Hillary. Especially looking at the reason why people voted for the war. It wasn’t to free the Iraqi people, it was to enrich the oil industry and the weapons industry, and it’s a cash cow.

They had stacks of cash missing. One bundle was $6 billion — missing. And Hillary voted for that war. What does that tell you about Hillary?

[The notion that Bernie might lose to a more moderate Republican challenger is] the joke of the year. Every poll puts Bernie so far ahead of Republican challengers, you know. And what they are trying to do is keep the race tight. And that’s the media. That’s what happened with the election of Mitt Romney and Barack Obama. That’s why Barack Obama threw the first debate. … It was much better if you create the semblance of a tight race.

4) On voting for the Adult Use of Marijuana Act in California, and the future of the black market.

[The leading California legalization initiative’s one-ounce limit for personal possession in public] — that’s arbitrary. That’s so silly. They’re still acting like it’s some kind of dangerous substance that should be monitored in such a way that the monitors can make money and that bullshit.

[The six plants per adult cultivation limit] — that’s so stupid too, but I can understand for zoning purposes. I can buy that one. I’m not worried about that one. But why? I mean, why the restriction? If it’s for water or aesthetics — not wanting to farm in residential areas — I can understand that. But if the plant itself doesn’t prove any threat to anything, why should you inhibit people from growing whatever they want to grow?

[The tactic of compromising to get a majority vote] — I think it’s dumb. I think worrying about trying to make these compromises — just like you can’t have a dispensary near a school or all that stuff. It’s ridiculous. Pot should be sold at drug stores. It’s a medicine. And it’s a safer medicine than most of the shit that is being sold at drug stores.

[But] if [AUMA] was the only thing on the ballot. Yeah, sure, sure [I’d vote for it]. All these laws will do is just keep the black market area flourishing, so it doesn’t matter.

Rest and recreation — I suggest that for everybody. That should everybody’s aim is to be able to kick back and light up and not worry about anything. That’s what got us here already. We got us this far. One thing about pot is that it relieves tension. Because it does mess with your memory and that’s good. You should forget a lot of the shit that you’re thinking about anyway.

So yeah, rest. And lots of water.